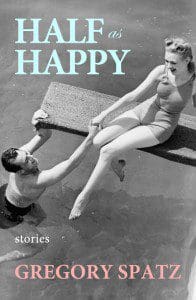 Half as Happy (Engine Books, 186 pages), the new story collection from novelist Gregory Spatz (Inukshuk, Fiddler’s Dream, No One But Us), examines faltering relationships and the unhappy people struggling to hold them together. The collection’s eight stories are remarkably honest, driven by moments both funny and painful that uncover deep rifts in the lives of Spatz’s characters.

In “No Kind of Music,” Patrick is drawn to the symphony after his wife leaves him for a younger, one-legged man. Most of the excitement remaining in Patrick’s life is centered on his eclectic neighbors, an elderly couple raising their rebellious daughter’s child. Patrick involves himself with them to mask his loneliness, but when the couple’s daughter comes to town and causes trouble for Patrick, he has to escape to the outdoor symphony, where he runs into his ex-wife and her new lover. “Why wasn’t he part of anything, anywhere, ever?” Patrick wonders to himself as he struggles to hear the concert. Alone amid a sea of spectators, he realizes that without his wife his existence has become empty.


“A Bear for Trying” is about twin brothers who do everything together until one of them falls into a coma. When the other begins to invade the intimate areas of his comatose brother’s life, their relationship is jeopardized. “Happy for You” tells the story of an elderly mother giving out Easter recipes to her son over the phone till  she realizes no one will be joining her for the holidays; her son will be spending them with his estranged father. The mother finds herself constantly at odds with “that feeling in the middle of the night when you wake up and can’t think of a single good excuse for your existence.” In both of these stories, the protagonists struggle to define their lives within the context of their closest relationships. Once those relationships change—whether suddenly because of an accident, or slowly because of time—the boundaries of their self become blurry.

The collection’s title story displays the hairline fractures of a seemingly happy marriage. Each day at lunch, Stan sits by his pool, eating and drinking beer, enjoying the view of his naked wife swimming laps in the sunshine. But since the beginning of summer, Heidi has become obsessed with her self-image, losing so much weight her husband no longer recognizes her body. While Heidi is driven by an insecurity rooted in the small, distant problems in her marriage, Stan tries his best to find the right way to tell her she’s gone overboard. “Too much of a good thing, honey, is still a good thing, but it’s too much,” he tells her in one of his subtle attempts to save her from herself. Soon, his overtures become less subtle, and a twenty-year marriage that appeared stable just months before is on the verge of implosion.

This constant search for happiness and meaning winds through Half as Happy, and often ends without a perfect resolution. The first story, “A Landlord’s Dream,” is about a couple who rent a new home as they look to run away from the painful memories held in their last residence. But Carolyne and Seamus’s real problem is a lack of intimacy. “If her instincts had taught her one thing by then,” Carolyne thinks, “it was that they were seldom to be trusted, and never where men were concerned.” Carolyne and her husband are always trying to find easy solutions to their issues—new house, new toys—that only touch the outskirts of the actual problem. They, like most of the characters in Half as Happy, don’t have a problem understanding they are unhappy; their difficultly lies in determining the next step to take. Spatz guides us into the most intimate parts of his characters’ lives, and often concludes their stories with an uneasy lack of resolution. The indication being that the future of these relationships may be as doomed as you would think.