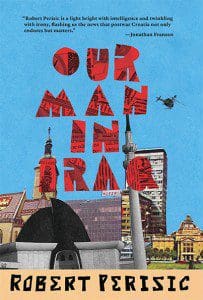 Originally published in Croatia in 2007, Our Man In Iraq (Black Balloon; 202 pages), Robert Perisic’s finely crafted and witty novel, is now the first of his books to be translated into English (with translator Will Firth). American readers should delight in discovering Perisic’s work, while lamenting this inexplicable delay.

The novel opens in 2003. Toni has patched together a promising life: the Economics editor for PEG, an independent local newspaper, he lives in Zagreb with his beautiful girlfriend, Sanja, an actress who has just landed her first major stage role. Marriage seems to be on the horizon, and perhaps a move to a grander apartment as well.

But trouble simmers beneath the slick surface. Sanja’s big break gradually but inexorably draws her into another world and another echelon of fame. The new apartment Toni views as a way to keep their lives and relationship evolving will require taking out a massive loan. And most urgently of all, there is the matter of his man in Iraq. Despite his determined efforts to break free of the family he considers pre-modern and all its associated tribal encumbrances, Toni has nevertheless become a kind of fixer for his extended family. His latest improvisation in that role has far-reaching consequences: to provide his cousin Boris with gainful employment, he has set up the veteran in a correspondent’s role, covering the American-led invasion of Iraq for PEG. For reasons that are never entirely clear, Toni seems to believe he can keep his employers from discovering that Boris has no training as a journalist. Inevitably, the reports Boris sends from the field are not fit to print: rambling and pensive, they are elliptically insightful about war in general while devoid of factual information about this war in particular. But they betray far more disconcerting traits than amateurism—Boris’s most distraught missives suggest he may be suffering from Post Traumatic Stress Disorder. When the reports cease altogether and Boris seems to disappear, Toni observes, horrified, as his life unravels rapidly on all fronts.


Perisic’s smoothly told and unfailingly engaging story takes off swiftly and never falters. Toni’s is a tragic-comic tale enriched by layers of meditation on the broad and lasting effects of war, and the peculiarities of contemporary media. The Croatian War of Independence looms large here, a major force in shaping cultural and individual identities. Toni and his friends, family, and colleagues are inheritors of a drastically transformed culture, and the invasion of Iraq is a fresh reminder of wounds that have not yet healed. Perisic is openly critical of the influence Western culture and capitalism has had on his homeland, yet he is humorous and honest about the troubles native to the land as well.

Throughout the book, Toni’s struggles mirror the rapid transformation of Croatia itself, recently re-made as a capitalist and democratic state: “I was in transition like the country itself. Hey—I saw the light—now I was supposed to be a subject and be at the center of things. I had to act and choose… All the options gutted me.” At a loss, Toni’s fallback stance is that of the disaffected rebel—but how to rebel in a supposedly free society? Without a ready answer to that question, Toni takes distancing himself as much as possible from his family’s ostensibly provincial life as his only fixed direction. His entrenched mistrust for everything he associates with his parents’ generation extends to sentimentality; instead, he’s nearly perfected a disinterested façade. But, we’re led to wonder, at what cost? While Toni is comfortable referring to Boris as “crazy,” the wounds Boris bears are markedly similar to those simmering within Toni.

Our Man in Iraq also presents a scathing view on contemporary news media, looking askance at media coverage of both the Iraq war and a simultaneously unfolding financial crisis at home. The inclination, at PEG, is toward infotainment: journalism at this paper seems to be a project of manufacturing stories—the staff “constructed reality, searched for events,” allowing alarming or gripping headlines to guide narratives. Here, too, Toni is painfully aware of the forces shaping his life, but feels helpless to act effectively against them. (In a staff meeting, Toni recalls, “…I started to talk about the responsibility of the media. Sensationalism in the economy was dangerous.” He is briskly over-ruled.) The excruciating absurdity of war and the inane absurdity of media coverage are inextricably entwined here. In the English translation, the title of Perisic’s novel echoes Graham Greene’s Our Man in Havana (apt enough, as the books do share some common ground), yet Perisic’s book brings to mind Joseph Heller’s Catch 22 most acutely, particularly as we read Boris’s dispatches from the front.

Amid the competing forces of media, politics, finance, history, and war, Toni strives to not be entirely subsumed and commodified. Like others of his generation in Eastern Europe, Toni spent his youth enduring the war and grappling with ideas of revolution and rebellion, reacting to the rapid cultural transformation unfolding around him. During their college years in the early 1990s, Toni and his friend Markatovic leave school briefly to serve in the Yugoslav People’s Army. Returning to University, they drop Economics and become arts majors, spending most of their energy “drinking beer and frightening the faculty with our subculture rebellion, for which the war provided an unexpected pretext.” In adulthood, Markatovic has re-made himself as an entrepreneur, and chosen a more traditional path—upscale apartment, marriage, children, (as well as debt, separation, and, perhaps, divorce)—while Toni clings to his sense that he’s living a life less ordinary, more consistent with his youthful ideals. But it is increasingly difficult for Toni to see how to move forward, to evolve and mature without settling into an unrecognizable version of himself. He looks at his apparent options with some anxiety, wondering, finally, “Who knows what it means to be rebellious nowadays.” Toni asks of Markatovic, “Do you also get a strange feeling when you mention a big word like ‘Jesus’ or ‘revolution,’ like a weariness comes over you?” A contemporary American audience, shouldering troubles, idealism, disillusionment, and war-weariness of their own, may find that strange feeling familiar.

As his troubles deepen, Toni admits, “My whole life I’d secretly been waiting for a miracle. And now it was high time for it to happen.” Here, too, Toni seems aware of the mythos influencing him: in an American movie, this nadir would function as the moment before the inevitable turn-around and eventual happy ending. How deeply satisfying it is to hear Perisic’s wry voice take a different angle, and tell a different story.