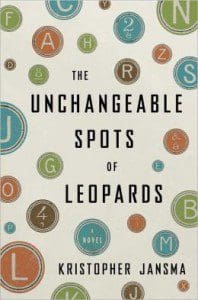 In his first novel, Kristopher Jansma examines the idea of truth and the very nature of writing fiction. The Unchangeable Spot of Leopards (Viking; 253 pages) follows the life of the unnamed narrator, starting from the time he is eight, sitting in an airport waiting for his mother, to well into his adulthood, when he sits in a very different airport and deserts a manuscript on a café table.

The narrator’s name shifts many times through the book. To the members and debutantes of Raleigh’s Briar Creek Country Club, he is Walter Hartright, a soon-to-be Ivy League student; to an audience at a short story reading at Berkshire College, he is Pinkerton; to the students in an Introduction to Journalism class he’s the eccentric Professor Timothy Wallace, and, finally, to the rich boy whose papers he writes for cash, he is Outis. With great skill, Jansma creates within his narrator a character and a voice that both encapsulate the everyman and the “nobody.”


The plot of The Unchangeable Spots of Leopards follows the worldwide travels of this expertly crafted, yet hopelessly unreliable narrator and of his two friends: an alcohol-addled collegiate literary rival and a high-society Broadway actress. As the trio globetrots from Sri Lankan mountains and Manhattan jazz clubs to a wedding on the lip of the Grand Canyon, they pursue love and experience success and failure.

But Jansma’s coming-of-age tale is just as much about the nature of truth and the role of lies in writing. He calls attention to the half-truths of the writing life, quoting one of Emily Dickinson’s most famous lines, “Tell all the truth but tell it slant.” This novel is an exercise in slanting the truth. With each successive chapter, earlier details the reader had taken as fact change slightly, but never to where they truly contradict what had been stated before, so nothing is ever wholly unrecognizable. (For example, at the beginning of the novel the narrator says he was a great golf player in high school, but by the end of the novel he says it was tennis.)

The same can be said for the narrator’s two friends, whose extraneous details, such as their names or the royal pedigree of a spouse, vary but whose core characteristics remain the same. This particular steadfastness among the whirling chameleon changes makes Jansma’s protagonists seem lively and even authentic.

Despite the narrator’s woeful lack of credence, the reader stays with him, following the story as he boards a plane to Dubai, runs from an Internet café to his train in Sri Lanka, and even as he rides in a truck through Africa. That’s because despite the lies, his is an engaging tale and he is honest in his own fashion, dressing the truth up in falsehoods to expose it more poignantly. Jansma’s skillfully crafted novel is the kind of book that stays with you, hovering around the edges of your mind long after you have put it down.