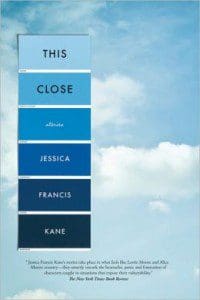 Jessica Francis Kane’s new story collection, This Close (Graywolf Press, 192 pages), is an interior examination of the closest of relationships. Kane reveals in these thirteen stories how easily conflict, jealousy, and pain can create distance between family, friends and neighbors.

In “The Essentials of Acceleration,” Holly is the lonely woman on her block, sharing a house with an elderly father who leaves flowers on the porches of the neighbors. Her father easily befriends the people who live near him while Holly remains confused about her father’s affability. To Holly, being a neighbor does not necessitate friendship. “Let’s have laminated sheets up and down the street announcing all our personal disasters and resentments,” she thinks. As her father grows closer with the young mother living across the street, Holly’s eventual jealousy breeds resentment toward her father during his waning days.

“American Lawn” opens with Pat renting out a portion of her yard to Kirill, a Croatian immigrant looking for a place to garden. Pat grows jealous of the familiarity Kirill shows her younger neighbor, sparking a subtle antagonism between the two women. Kirill, who acts as the objective observer to the ever-widening rift between Pat and her neighbor, later wonders if he has any chance of surviving in a country ripe with such strange disputes. “ ‘America,’ he sighed, shaking his head, ‘I’m am still wondering how to win her.’ ”


Through two blocks of narratives, Kane shows the development of families over time. In the first, consisting of four stories, Mike Leary grows up with a stubborn single mother and eventually builds a successful life. As a child, Mike fails to understand his relationship with his mother, or her friendships with other men. When adult Mike dies prematurely, his mother and his friends struggle to maintain the relationships they’ve built with each other now that they are left with only memories of him. Neither Mike, while he’s alive, nor his mother can understand the friendships each has built in his or her own life.

The next grouping begins with the “The Stand-In,” which introduces Hannah, vacationing in Israel with her father while her mother is bed-ridden at home, spurring her first experiences in the adult world. In the two stories that follow, her parents grow old while Hannah evolves from a young, naive girl into a powerful woman able to hold a conversation with her father’s friends. Soon she becomes barely recognizable to her father, and he realizes he no longer understands the connection he has with his daughter. In these pieces, we see how people can grow together yet move apart over the span of their lives, often without realizing what’s occurring.

“Next in Line” is the tale of a couple grieving the loss of their infant child. The mother spends her days wandering through the CVS in which she believes an old woman cursed her daughter. What she’s looking for, she doesn’t know. But unlike many of the characters in This Close, the mother is able to bond with her husband, and together they begin to move past the child’s death. Finally, the mother does: “With that, a subtle shift was complete: there was now a time after S was gone and that was not the present. The world had changed again.”

Kane, whose last book was the critically acclaimed novel “The Report,” often leads her characters into discovering the emptiness in their relationships, but she also shows how conflict can bring people together instead of drive them apart. Like the mother in “Next in Line,” people don’t always hide from their emotional turmoil. Some face it directly, saving their relationships rather than destroying them.