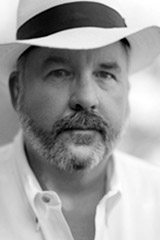 Christopher Buckley is a poet, creative nonfiction writer, and editor. Throughout his long career, he has been a Guggenheim Fellow in Poetry and the recipient of four Pushcart Prizes, two NEA grants in poetry, and a Fulbright Award in Creative Writing. His nineteenth book of poetry—Varieties of Religious Experience (Stephen F. Austin State University Press)—will be published next month.

Varieties is a sincere exploration of meaning, in life and in all things. These poems ask questions about an individual’s place in the universe and about the existence of the universe itself. Written in language humble and wise, Varieties reflects on experiences both personal and universal. In his captivating voice, Buckley invites us to consider ideas of the mundane and the divine, ontology and epistemology, and what on earth we are here for.

Buckley, whose work is forthcoming in ZYZZYVA’s Spring 2013 issue, corresponded with us via email and answered some questions about his new collection of poems.

ZYZZYVA: The title of this collection raises the question, what does “religion” mean to you?

Christopher Buckley: The title of my book is borrowed/stolen from the famous and seminal book by William James, of course. I found it fit a longer poem I was writing about my mother’s death, the range of experiences surrounding it. I hit a spot where a number of classic titles suggested poems to me for the book: A Sentimental Education; Natural    Selection, Interpretation of Dreams, etc.

I then saw that the William James title would accommodate several ironies at work in the new collection, hence the title of the book.


James said—and I quote this in the beginning of the book—“Religion … is a man’s total reaction upon life.” That is what is means to me. Encompassed in that “total reaction” I find the fundamental metaphysical question, a transcendence of some kind we often seem to be looking for. Charles Wright, a poet I have admired for many decades, has famously said, “All my poems seem to be an ongoing argument with myself about the unlikelihood of salvation. …” I wish I had said that. That is pretty much my take on things. Another quote that begins the book, and which is also used for a poem, is from Albert Einstein: “I am a deeply religious nonbeliever … This is a somewhat new kind of religion.” That is pretty much my take on it. You can have hope.

Z: Some would say that science and religion sit at opposite ends of a spectrum, but your poems explore a unique interaction of the two. Could you talk about the relationship between religion and science, particularly as they are dealt with through art, which is a whole different category on its own?

CB: Certainly. Religion and science are often seen to be at odds, but that is mostly by those who subscribe to one orthodoxy or another. I am miles from any orthodoxy, so in the larger sense I can use both, as I think a lot of art does, to simply examine our life on the planet.  On the one hand, a more “religious” focus sets me off in search of some meaning or transcendence to our lives, hoping for “something” that simple faith, in the face of cosmological discovery—which broadens and deepens every five years—calls into question: string theory with its eleven dimensions, dark matter, and parallel universes, just to name a few. What constitutes life and consciousness, what makes it worthwhile? Or is it, as the college basketball cliché has it now, “One and done”?

Z: Would you say that the act of writing poetry itself is a form of religious experience?

CB: In many cases a poem is a meditation. Some classical techniques of meditation, say those of St. John of the Cross or St. Ignatius Loyola, are not so far removed, I think, from the mental processes of imagining and making a poem. And of course the focus of meditation generally is about making some sense of transience and confronting the notions of an afterlife, or the lack thereof. Granted, there are plenty of rewarding poems about the plums in the icebox, and the day-to-day things of the world. I am, for instance, a big fan of Ted Kooser and his pragmatic epiphanies. Still, beyond the particulars, there is usually an emotion or idea that has more common gravity about our situation on Earth. Since I was a young poet I have been an admirer of Stanley Kunitz; his introduction to Passing Through says in part: “Poetry I have insisted, is ultimately mythology, the telling of the stories of the soul. This would seem to be an introverted, even solipsistic, enterprise, if it were not that these stories recount the soul’s passage through the valley of this life—that is to say, its adventure in time, in history.” Amen to that.

And the great Chinese poets were, to my reading, trying to figure out the metaphysical debate. And the Aztec poets way back wondered if there was time somewhere else other than the Earth. Both enunciated the ancient problem of knowing the gods, or God. In his brilliant “Ars Poetica,” Charles Wright addresses working out back in his shed, writing poetry: “I like it because I am better here than I am there.” That transcendence, no matter how small or particular, no matter how individual, could be called a “religious experience.” But I do not think poets should go around in long white robes proclaiming visions.

Z: There are many references to the sea in these poems. How does your experience of the sea—or nature in general—influence your writing?

CB: Place has always been central to my poetry and nonfiction writing; it is the filter through which you focus your experience, your understanding, such as it is, of your life. (Of course, Wordsworth and nature as moral tutor.) I was raised in an Edenic environment in Montecito/Santa Barbara in the mid-‘50s, surrounded daily with undamaged and un-crowded nature. I grew up at the edge of the sea and lived in the foothills and woods and often followed the creeks down from there to the beach. I took up skin diving and soon after became a surfer, an experience I have never found equaled—almost beatific exhilaration and vibrant, intuitive communion with the natural world. My interest in cosmology and philosophy always brings me back to that place and those images. Even in a parochial sense, I supposed I am looking at universal forces.

Z: These poems also make many references to music. What role would you say music plays in a person’s religious experiences?

CB: It is difficult to speak for others. Somewhat obviously, music is a compelling and uplifting experience all on its own at many levels of comprehension. Back in the day, we all sang the Latin hymns in Catholic school/church; it was part and parcel. Miss Dickinson took the rhythm of hymns for her poetry. Music is an essential part of poetry, and again from Charles Wright: “If you can’t sing, get out of the choir.” My parents were both singers, my father worked as a DJ in radio for much of his life. The radio and hi-fi were always on and the lyricism of those ’40s and ’50s ballads, the lyrics themselves, were engrained in my conscious and subconscious mind. That at least set me on the road.

Z: In your poem “Coplas,” you write, “When we’re convinced that we are doing / important work, we’re seriously in trouble.” What then drives you to pour your work into this craft of writing? What significance do you think your poetry—or any poetry—has in the big pictures of life, science, and religion that you explore in this collection?

CB: What I am referring to in “Coplas” is the arrogance and self-importance, the blind ambition, I have observed in some individuals in poetry over the years. Gandhi said something very close to, “The little thing you do will not be important, but it is important that you do it.” I do my best, one poem at a time, and think I have a pretty realistic understanding of my level of accomplishment relative to those I read and admire. When William Stafford said to an interviewer that he wrote a poem every day and was asked what he did if that day’s poem was not as good as his best, he said, I just lower my standards! It is important to maintain a sense of humility given the history of the art, given our mortality.  William Carlos Williams said, “A successful poet is one who writes a successful poem.”

Certainly, it is not celebrity that drives me, it has given me a wide berth early on. I love poetry, the art of it; I love art. I tried painting when I was young and discovered quickly I had no real talent. I came to poetry through love of the craft. I found poetry through tenacity and continuous work, for in the first years I had nothing anyone was calling exceptional talent. I just keep working, often on differing sides of the argument, to un-puzzle my life as best I can. I am grateful every day I have something to work on and grateful especially for my close friends in poetry who are so generous in editing my work, Gary Young and Jon Veinberg. They offer help and keep me from sounding self-important. Bless them.

One thought on “Transcendence as Religious Experience: Q&A with Christopher Buckley”