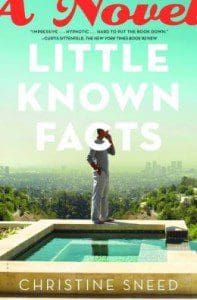 The obsession with celebrity is arguably more intense today than it has ever been before. In the millennial years, the somewhat nebulous concept of fame has been democratized, intensified, and extended to those outside of the film and television industries of Hollywood. Yet despite the elevation of everyday people to the status of public figures, the hierarchical nature of celebrity continues to privilege movie stars above all else, using their fame and talent as the benchmark against which all others are judged.

Exploring celebrity through this lens, Christine Sneed’s novel, Little Known Facts (Bloomsbury, 304 pages), tells the story of a family at the center of Hollywood’s fame bubble. Embittered by divorce and dealing with the ennui of a life filled with privilege, Sneed’s characters are by turns selfish, greedy, obstinate, and guilt-ridden, a combination of traits that leaves them feeling confused and unsatisfied.

The family’s patriarch, Renn Ivins, is a famous movie star who has traded his stable family life for a successful career, one punctuated as much by accolades as by moments of intense frustration. His adult children, Will and Anna, are a study in opposites—the former is self-obsessed and perpetually unemployed, the latter self-possessed and intensely hard-working. The complexities of their relationships are highlighted by their interactions, and underscored by a narrative that focuses on what is left unsaid between them.


Well-crafted and character-focused, Little Known Facts consists of layered individual stories working together to drive the plot forward. Offering the viewpoints of both minor and major characters, the story’s shifting perspectives are expertly intertwined and never heavy-handed. These narrative shifts also serve to situate the novel within a long tradition of character-driven stories, and are especially reminiscent of Jacqueline Susann’s Valley of the Dolls, another cautionary tale of celebrity and excess.

The solipsism of the central characters—Renn, Anna, and Will— is mirrored by that of the minor characters (such as Renn’s two ex-wives) with a surprising result—the surfacing of a pervasive self-indulgence that causes tensions in their relationships among each other. As Jim, one of the minor characters, reflects during his attempt to define celebrity and his place within the Hollywood landscape:

“They are victims of their own appetites, but I suppose that is true of everyone. They will stuff themselves with junk food before dinner or sleep with their friends’ wives or drive their cars over cliffs because they own ones they don’t know how to drive or else they are desperately lonely. Their nightmares are other people’s daydreams.”

Dark, poignant, and at times disquieting, Sneed’s novel does not offer much in the way of hope. Instead, it reflects on our cultural fixation with celebrity and everything that glitters, shattering illusions and façades in the process. As Sneed writes, there is “so much poetry in sadness, a very different and possibly more potent variety than the kind of poetry you find in happiness.” Despite its bleak moments (or rather because of them), Little Known Facts tells a story that moves beyond the salacious lives of its characters, illustrating the difficulties and obsessions that are as common within Hollywood as outside of it.