Conveying the Brilliance and the Chaos of a True Genius: John Neumeier’s ‘Nijinsky’ 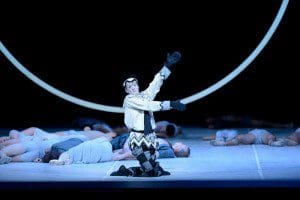 A few people straggled almost unnoticed onto the stage of the War Memorial Opera House before the house lights had dimmed, and they began to talk. Even before the dancing had begun, their presence was an announcement that one had better not expect to see a traditional narrative ballet that opening night. However, the ambition to create a piece that comes close to the innovative prowess of its subject—Vaslav Nijinsky—would require more than an opening gimmick. Nijinsky is still one of dance’s towering figures, and one of the very few who merit the term “genius” both as a performer and a choreographer, blessed with abilities of the practitioner and the visionary. This is the man who envisioned a young faun as a masturbating nymph-chaser, and disguised a ménage à trois as an innocent game of tennis between two women and a man (and that was the cleaned-up version; his original idea was for an all-male cast and even less ambiguity). His ballets incited riots and still look modern today, while other examples of innovative and even revolutionary art softens and grows quaint with time.

John Neumeier’s Nijinsky, performed in a limited run by San Francisco Ballet guest company The Hamburg Ballet last month in San Francisco, imagines Nijinsky at the moment of his last public performance—in Switzerland in 1919—already in the throes of the mental illness that would end his career early and would plague him unto his death in a clinic at age 61. Neumeier has his Nijinsky revisit important moments of his life, dancing with and as characters from his most famous ballets. This could be seen as a predictable physical transposition of the dancer’s schizophrenia, but at times the elements from Nijinsky’s own choreography and that of others whose ballets he made his own, when combined, embellished, and added to the foundation of Neumeier’s own choreography, illuminate areas of his persona and history in ways both beautiful and seemingly true (anyone who has not read one of the many bios on the dancer, or Nijinsky’s own harrowing diaries, can’t help but take Neumeier’s word for just how true).

Here we see Nijinksy the very young man, new star of the Imperial Ballet and the newly named Ballet Russes; he’s lush, self-absorbed, and vulnerable as the Golden Slave in Fokine’s Scheherazade, caressing himself and obliviously bewitching the people around him. Even more effective is the pas de trois between Nijinsky, his future wife, Romola de Pulsky, and the Faune from L’Après midi d’un faune, acting as a sort of erotic surrogate for a preoccupied Nijinsky. Known for being cold and dull in real life, he channeled his entire wealth of charisma into his stage persona. In this scene he is a sort of indifferent, while this wilder, more sexual persona from his imagination woos the rapt woman. (That this is a preposterous fabrication of events—Romola having stalked and practically bullied the known gay dancer into an icy marriage—should only bother those who attend the ballet seeking facts and accuracy.)

However, the same devices that work so gorgeously in some places prove problematic in others. For instance, the program doesn’t clearly delineate all the time who is onstage. Certain characters might be obvious, such as Nijinsky and Romola, and an improbably lithe Serge de Diaghilev, Nijinksy’s former mentor and lover. But other characters—dance teachers, siblings, parents—aren’t as distinguishable, making it hard to know what is going on and with whom. (Because of Nijinsky’s barely carnal involvement with his wife, it wasn’t always clear whether one particular scene depicted his relationship with his sister or with Romola, the opportunity to use physicality to make the distinction effectively eliminated.) So one is left with a general idea of the “color,” or emotional gist, of a scene, but without the relevant information to deduce anything deeper.

There is a lot of convulsing and flailing (too much, perhaps), which at first I assumed was Nijinsky himself, but later understood that at some points must have been his brother, Stanislav, also a dancer and also afflicted with mental illness. The horror of the First World War was somewhat diminished by the choice of costuming, camo briefs and open jackets, making the soldiers look less like men in combat and more like soldiers on leave, surprised by their sergeant in a cathouse. Le sacre du printemps, Nijinsky’s most controversial work, depicting human sacrifice in pagan Russia, is aptly woven into the battle scenes, but ends up bizarrely looking more like Maurice Bejart’s adaptation, with men and women in nude unitards and flowing hair.

Yet for all the confusion, at the end of the evening it was clear one had witnessed an uncommonly ambitious ballet, both in its method of storytelling—risky, problematic, but at times rewarding—and in its attempts to express in movement the extreme, dark, and chaotic labors of a troubled mind. Whether one likes it or not, Nijinsky is the sort of ballet that makes a case for the form’s relevance as a still-evolving dramatic art. In attempting to reveal the inner and outer life of one of the most dazzling and complex artists of the 20th century, and to translate into movement a disease that is still largely mysterious to us, Neumeier uses ballet in unprecedented ways. He presents us with something not easy or obvious, and not even perfectly rendered, but rich, challenging and provocative nonetheless.

One Response to Conveying the Brilliance and the Chaos of a True Genius: John Neumeier’s ‘Nijinsky’