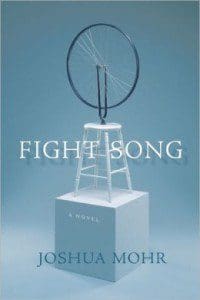 Suburban harmony is under attack in Joshua Mohr’s new novel, Fight Song (Soft Skull Press, 272 pages). The book is a humorous ride through one week in the life of a middle age man who is going off the rails. But it’s also a critical look at how suburbia has been taken over by gadgets and corporations, as well as the stasis that traps people inside their jobs and within their gated communities.

Bob Coffen is one of those people. When we meet him, he’s just trying to bike from his job to his boring home. He’s been working at the same video game company for ten years, an anniversary marked with the gift of a plock (a half-plaque and half-clock, though it doesn’t actually keep time). His wife spends her days training to set the world record for continuously treading water. And his children are disconnected from him but always connected to their gadgets. When Bob’s neighbor Schumann runs him off the road, sending Bob and his plock crashing into the roadside oleanders, Bob has had enough. Soon he convinces Schumann to be his life coach, gets kicked out of his house after an unfortunate event at a magic show, and seeks the advice of a muscled-up fast food worker named Tilda. Once things start going bad for Bob, they go bad in a hurry, and his once-mundane existence now includes an emotionally unstable magician and new friends in a Kiss cover band.


Throughout the novel, Mohr constantly pokes fun at the banal nature of these people’s lives. Consider Bob’s submissiveness to the Home Owners Association. “They pounced quickly when Coffen hung that birdfeeder a few months back without proper consent.” A birdfeeder seems to be the simplest decoration for a yard, but without consent from his subdivision’s HOA, Bob can’t have one. The birdfeeder seems like an appropriate symbol for Bob, too, who seems to exist solely to pay for his car insurance and his wife’s expensive aquatic club membership.. But there is no HOA to keep Bob from making all of the bad decisions that have lead to his boring life. (When Bob finally snaps, attempting to throw a flagpole through Shumann’s window, his first thought is “the HOA will not be impressed with what’s transpiring on one of their hallowed lawns.”)

Fight Song is also a sharp critique of the way commercialization has sapped the authentic from our lives.Bob’s daughter would rather look at videos of seahorses on her iPad than go to an aquarium and see the real thing. As Bob drives his children through town, he observes “a paradise of saturated fats—fast food Chinese, two corporate burger joints, a fish and chip shop that originated in Seattle, and a Taco Shed.” Bob’s world appears to be just as inauthentic, Mohr shows us, as the fake ones he spends his days creating for video games.

“Do you ever want to get out of your box?” Bob asks Tilda, while she’s frying him a corporate grease meal. But the question really is, does Bob ever want to get out of his box, his suburban stagnation, his unfulfilling job? Or will he just languish away as another ordinary citizen in an anonymous suburb. Fight Song has the reader pleading with Bob to try to escape the madness of his inert life.