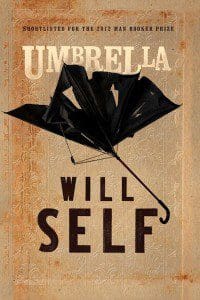 Will Self’s new novel, Umbrella (Grove Press, 397 pages), is a whirlwind journey through the lives of four characters living in three different eras. A Modernist novel featuring frenetic stream of consciousness writing, Self defies convention and digs deep into the social issues plaguing the 20th century.

Audrey Death matures in London at the turn of the century, when underground railroads and automobiles were changing the landscape of the city. Following World War I, which splits Audrey from her brothers Albert and Stanley, she suffers a mental breakdown. Later diagnosed with encephalities lethargica, Audrey is stashed away in Friern Mental Hospital to rot. Fifty years later, psychiatrist Dr. Zachary Busner takes an interest in Audrey and in other Friern patients showing similar symptoms. Proposing a radical new drug treatment meant to jolt the patients out of their near-comatose states, Dr. Busner encounters results he refuses to acknowledge. Forty years following the experiment, a retired Dr. Busner wanders through London, subconsciously tracing his steps back to Friern. New condominiums have replaced the old hospital. As Dr. Busner stands at the exact spot where he first met Audrey Death, he finally finds the epiphany that has eluded his professional and personal life. “The world is ours to tear apart,” he thinks, reflecting upon Audrey and the other patients, “but what if it’s too late to start again?”


Dr. Busner’s realization is nestled into a narrative loaded with heavy critiques of war and mental health treatment. The initial misdiagnosis of Audrey’s disease is not so much the problem as is the general apathy shown toward her. Patients at Friern are given generic medications and locked away in wards, left to await death. Within this critique lies the constant symbol of the umbrella. Audrey’s first job is as a typist at an umbrella factory; she and the other hospital patients live under the umbrella of prescription drugs used not to treat them, but simply to keep them quiet. (The word “umbrella” is even used as a euphemism for a tranquilizer given to unruly patients in the hospital.)

Prior to the arrival of Dr. Busner, the patients are never properly diagnosed or treated, and nothing further is learned of their condition. In the same vein, Self suggests we are as oblivious to the constant affliction of war and its causes. As one doctor puts it in the novel, “Odd, isn’t it, to think of all that mayhem, all that killing—now too in Pakistan—and yet the vast bulk of it is perpetrated by a mere handful of psychotic personalities.” Despite the calamity of World War I, nothing has really been learned from it just as nothing was learned from the mental health debacle Self vividly displays in Friern Hospital.

So is history doomed to repeat itself, circling back to where it started, just as Self’s characters always seem to do in Umbrella? Near the beginning of the book, Self writes, “Stuck in the present’s flesh are the looking glass fragments of a devastating explosion: a time bomb was primed for the future and planted in the past.” Self’s feverish novel leaves the reader wondering if the future will indeed repeat the past or if we will finally learn the hard lessons from what we have already painfully known.