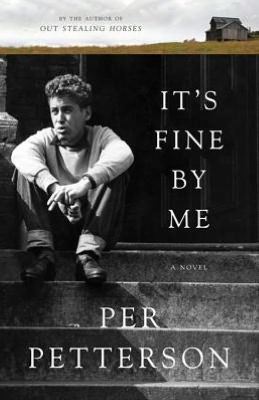 The Norway of Per Petterson’s newly translated 1992 novel, It’s Fine By Me (Graywolf; 199 pages; translated by Don Bartlett), will be familiar to readers of his 2007 bestseller, Out Stealing Horses. It is a country marked by pervasive solitude and backbreaking work, by deeply buried familial troubles and the quiet, occasional help of strangers.

In 1970s Oslo, young paperboy Audun Sletten prides himself on his checked pants and ubiquitous sunglasses. The latter provides him distance from the surrounding bleakness: alcoholism runs rampant (most notably evident in Audun’s absent father), and death seems close (his younger brother, we learn, fatally crashed a car). On the playground, his school companions take sides on the Vietnam War, and girls shimmer on the horizon, not important enough yet for Audun to crawl toward.


The physical landscape Audun inhabits isn’t much better. Petterson gives clear, short descriptions of a Norway that doesn’t seem that beautiful. “The road narrows, the last houses are at the edge of Dumpa, where Condom Creek flows through, and on the other side, the ground rises in a steep arch up to the women’s prison at the top,” reads one particularly telling scene.

It all seems dire. But in Audun and his friend Arvid Jansen (the protagonist of 2006’s In the Wake and 2008’s I Curse the River of Time), Petterson has created two aching, young souls with severely held beliefs: in Jimi Hendrix and Jack London, in the power and possibilities of writing, and in fending for themselves. In one faintly humorous passage ringing with the boys’ anxiety, Petterson describes a euphoric drive into rural Norway and the sudden realization they need to get gas, something neither has done before. Instead of asking for help, Audun and Arvid pretend to look at a map while surreptitiously studying an old man filling up. Then they do their best to copy him, unlit cigarettes drooping from their lips.

Despite their pretensions toward adulthood, Petterson makes it clear Audun and Arvid are, in many senses, already there. Swinging to and fro in time, Petterson cuts swaths between 13-year-old Audun and the 18-year-old version, who toils among deaf and fingerless men at a printing press in town. We can only assume these unaddressed periods in between are comprised of routine: paper slinging, solitary wandering, reading Martin Eden. The one taste Audun seems to have retained from that lost time is a week spent in the countryside after being rescued from drowning by an older farming couple.

“At night I slept in the room beneath the skylight, and in the morning I got up, and Signe served me her home-made bread in the kitchen. And then I worked most of the day on the jobs that Leif decided I could manage. There were more and more and I could not get enough, and in the evening I swam in the river at a far better spot than the first one I found. At ten o’clock I was sent upstairs with a hug from Signe, and I was so greedy for it that I blushed. I tried to think as little as possible, I just drank it all in.”

In spare prose, Petterson’s perhaps autobiographical novel makes clear that adulthood is not the main thing waiting for Audun— a singular and often angry young man who keeps most of his feelings to himself— on the other side of his raw semi-childhood. Rather, as the novel’s tiny moments of joy and introspection pile up—Signe’s homemade bread, the perfect curve of a newspaper thrown just right, the raucous danger of the printing press—it’s clear that what’s waiting for Audun is his destiny as a writer. Things are decidedly not fine by him, but Audun knows he will get through with his eyes wide open.

2 thoughts on “A Paperboy Finding His Way Out of Bleakness: Per Petterson’s ‘It’s Fine By Me’”