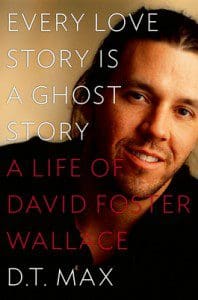 The main triumph of Every Love Story Is a Ghost Story (Viking; 368 pages), D.T. Max’s biography of the late writer David Foster Wallace, is that it’s not really a triumph at all – at least not in the ways fans of Wallace’s jittery, hyper-articulate prose might expect. By examining the author’s life in sterile and often painful detail, Max teases out the sort of truths that Wallace, for all his rhetorical and conceptual acrobatics, could only ever seem to orbit. The book’s resultant paradox (its most immediate one, anyway) is almost Wallace-like in its complex reflectiveness: it’s through decidedly non-decadent probing that we begin to understand just how multi-tiered and consuming the writer’s struggles with depression, addiction and sexuality actually were.

Max dedicates only 14 pages to Wallace’s pre-college years, and only five to the final bout of depression that ended his life. These flimsy bookends are intentional, and support the work’s underlying insistence that to truly understand Wallace is to follow him through his most prolific time as a writer. Indeed, by focusing on the dynamic between Wallace’s work and his relationships, Max is able to sketch a thorough and often unforgiving portrait of the author—a man at once “proud of his fiction” and “ashamed of his behavior.”


Wallace, we learn, viewed many aspects of his life as a sort of competitive performance. “In general, he gyrated between wanting to impress and disliking himself for having such impulses,” Max explains. As an undergraduate at Amherst, Wallace bragged to fellow students about the length of his senior thesis, The Broom of the System. As a professor at the University of Illinois, he challenged his most confident pupils to games of tennis after class. One friend even remembers him intentionally rear-ending a car that cut him off in Boston. According to Max, Wallace had “an enormous amount of anger that was not easily acknowledged.”

He could also be massively self-centered. “Wallace had never had close literary friends,” Max states about halfway through the book, as the late author begins a correspondence with Jonathan Franzen. “(H)e was too competitive, judgmental and self-absorbed.” Later, when describing Wallace’s tendency to feign helplessness among handier friends, Max keenly observes that such behavior was “at once a gesture of generosity and of selfishness.”

This zigzagging struggle between solipsism and compassion emerges as a defining characteristic of Wallace’s career—from his first story collection to his final attempts to write The Pale King, his unfinished, posthumously published novel. During the period in which he worked on his masterpiece, Infinite Jest, he told an interviewer that a fiction writer’s job is to administer “CPR to those elements of what’s human and magical that still live and glow despite the times’ darkness.” Yet after the book came out, he slipped into a long period of hurtful and ultimately unfulfilling promiscuity. Similarly, he maintained the façade of a dedicated teacher, even as his private battle against depression withered his body and mind.

Max is precise, at times even clinical, in his critiques of Wallace, but he’s also clearly taken with the author’s work. He quotes Wallace’s books and correspondences at length and isn’t shy about offering his own interpretations (several times, he compares Infinite Jest to Hamlet). Between Wallace’s nosedives into depression and self-doubt, Max asserts, he was honing the defining voice of current American literature, a style at once exuberant and self-conscious, hyper-literate and colloquial, incisive and compassionate.

It is of course impossible to document a writer’s life, especially a writer as influential as Wallace, without paying some stylistic lip service to one’s subject. But even while making generous use of end notes (a Wallace signature), Max never presumes that writing about Wallace inherently means writing like him. Absent are the three-page sentences, the technical medical terms, the story lines emerging from disparate directions and braiding into a revelatory narrative. Max’s tools are simpler.

The biographer’s job, after all, is to observe. By the end of Every Love Story Is a Ghost Story, it’s clear Max’s portrait of Wallace is so vivid and clearly crafted precisely because Wallace didn’t write it.

Byard Duncan is a San Francisco-based correspondent for the Bay Citizen and Rolling Stone.