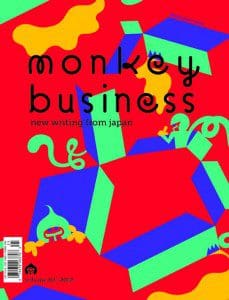 Published annually, the nascent literary journal Monkey Business connects an English-reading public—whose familiarity with modern Japanese literature may be limited to Haruki Murakami, Yukio Mishima, and Keiji Nakazawa—to a wide range of contemporary if not as well known Japanese writers.

The journal, supported by the Nippon Foundation and A Public Space, is the international offshoot of the same-name publication started in Tokyo in 2008. The second issue was published earlier this year, and just like the first volume, it is a delight. Translations of major authors and rising talents share space with work from established U.S. writers (Stuart Dybek, Rebecca Brown, Barry Yourgrau). There are poems and nonfiction, short stories and manga (including the Brother and Sister Nishioka’s otherworldly take on Kafka’s “The Hunger Artist”; in the inaugural issue, readers were introduced to the pair’s utterly distinct style in their version of another Kafka story, “A Country Doctor.”). And yes, there’s work from Murakami: a succinct, incisive essay on the craft of storytelling, in which he uses his books as examples. (Volume 1 featured an in-depth, candid interview with the author.)

Looking forward to next year when the journal’s third issue comes out (25 percent of all sales, by the way, go toward the Nippon Foundation/CANPAN Northeastern Japan Earthquake and Tsunami Relief Fund), we chatted via email about Monkey Business with editors Ted Goossen, a noted translator in Toronto who teaches Japanese literature and film, and Motoyuki Shibata, an esteemed Japanese scholar who teaches U.S. literature at the University of Tokyo and has translated Paul Auster, Thomas Pynchon, and Richard Powers.

ZYZZYVA: How did the idea of creating an English-version of “Monkey Business” come about?


Ted Goossen: It came about quite naturally. I was looking for a way to extend my work on The Oxford Book of Japanese Short Stories to introduce newer, less canonical writers, and Moto[yuki Shibata] was thinking along the same lines. We talked several times about various ways of attacking the problem. Then one day I realized that the journal he was editing, Monkey Business, had all the material we needed—new important writers who were turning out stuff that English-speaking readers would love.

TG: Masters like Jay Rubin and Michael Emmerich, who contributed to our first two issues, make it look easy, but in fact it’s very difficult, and the learning process never ends. Since there is no linguistic relationship as with Western languages, you have to be that much more creative in determining the appropriate rhythm and “voice” for a given work.

Moto and I work together as editors, checking the translations against the originals and working with our translators on questions of style, which helps the final product. It is hard for most publishers to know when a translation goes astray.

Z: Who are the major Japanese authors whose work you wish American readers knew more about?

Motoyuki Shibata: There are many, but I would especially like to mention Yasutaka Tsutsui, because (1) some of his works have been translated into English but in a rather haphazard way, which is sometimes worse than not being translated at all; (2) none of his most impressive novels from the 1970s and ‘80s has been translated; (3) since he belongs to an older generation he might become lost in the midst of readers’ desire for new stuff.

TG: I agree with Moto that Yasutaka Tsutsui is a voice more people should hear. I also particularly like the late Kenji Nakagami and the most definitely alive Hiromi Kawakami, both of whom have major works that are still waiting to be translated, though several good ones (including the Kawakami pieces in Monkey Business and Michael Emmerich’s translation of her Manazuru) are already out there.

Z: The Brother and Sister Nishioka have a style like nothing I’ve seen before in manga. How would you describe their work?

MS: You can describe it as well as I can. “The Country Doctor” in Volume 1 and “A Fasting-Artist” tell you everything. I wish you could see their original pieces, too. The brother writes the story and the sister does the drawing: fascinatingly dark, hauntingly sinister, and ferociously serious.

Z: This second issue features stories by Rebecca Brown, Barry Yourgrau, and Stuart Dybek, whose work you describe as being very popular in Japan. (In Volume 1, there was also a piece from Yourgrau.) Is there anything specific to their writing that makes them especially popular? Is there any common trait to any translated U.S. literature that happens to find a big audience there?

MS: I’m very much tempted to say, “Well, Japanese readers can always tell when they see something good!” One less arrogant answer would be that lyricism is important to readers here. Those three writers are so different from each other, but there is a striking lyrical element that underlies everything they write.

Z: In Volume 2, there’s a piece titled “What Do You Wish We Had in Japan Today?,” in which 17 writers and artists sent their responses to that very question. I was struck by novelist Daisuke Asao’s wish: “I wish we had more literature! If only literature were a closer, more familiar presence in our lives.” So I’m guessing that Monkey Business is just as much about getting Japan interested in its writers as anything else?

MS: Yes, but we don’t see it as a mission. We personally believe in literature and are happy if readers find what our writers do interesting, but we don’t assume that that should be the case with everyone.

One thought on “Big in Japan: Q&A with Ted Goossen and Motoyuki Shibata of “Monkey Business””