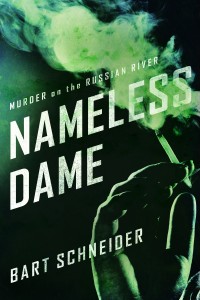 In his new book, Nameless Dame (Soft Skull Press; 296 pages), novelist and poet Bart Schneider picks up where he left off in The Man in the Blizzard, his 2008 crime novel about pothead Minnesota private eye Augie Boyer and police Detective Bobby Sabbatini. In his bouncy if violent, weed- and verse-filled sequel, Schneider brings Augie back to his roots in the Bay Area (roots Schneider shares with the narrator), taking him on a visit to Sabbatini and his family in the bucolic splendor (and weirdness) that is western Sonoma County, with its redneck pot farmers and hippie searchers, to name just a couple of the area’s denizens.

As much as Nameless Dame is about life along the Russian River, and Augie and Sabbatini trying to solve the shooting death of a troubled young woman, it’s also about poetry and its vitality – a theme you’re unlikely to come across in any other crime novel (except for the book’s predecessor). The work of the likes of Kay Ryan, Marianne Moore, and Wallace Stevens pops up through the book (as does Augie’s spontaneous haikus), all of it commenting and complementing the story as it unfolds.

Like Augie, Schneider – who is the author of the poetry collection Water for a Stranger, as well as the critically acclaimed novels Blue Bossa (a finalist for the Los Angeles Times Book Prize) and Secret Love — has returned to where he was born and raised. After spending 25 years in Minnesota, where he was the founding editor of the much-revered Hungry Mind Review and part of a “very enlightened arts community,” he now runs Kelly’s Cove Press, a Berkeley publishing house specializing in Northern California literature, which it pairs with artwork from Northern California artists.  We talked to him about Nameless Dame, his time in Minnesota, and what it’s like to be back in the Bay Area.

ZYZZYVA: There are a couple of themes that stand out in the novel: the power of poetry and the pall cast over a community by an unsolved homicide. Let’s take the poetry theme first. Was it your idea when you set out to write this crime novel to have poetry play such a major part of its sensibility?

Bart Schneider: This is the second novel in the series, but I came out of the chute with Bobby Sabbatini in The Man in the Blizzard as a working St. Paul homicide detective who’s become a successful poetry evangelist. He gets FBI agents memorizing it as they search it for code.

So when I moved back to California, I thought it’d be fun to set the thing here, echo my own experience as an outsider. And what could be a better setting for a poetry-karaoke bar than Guerneville? The poetry tavern was Sabbatini’s dream from the last novel, so it was a gas to be able to fulfill it. I really enjoyed trying to imagine a large, spread-out community infected with poetry. One reviewer said the novel existed somewhere between parody and utopia. If the vision of people reading and memorizing poetry is utopian, I say, go for it. Sneaking good poetry into a mystery novel feels mildly subversive.


Z: Is there really such a thing as a poetry karaoke bar, a place where people can get on a stage and recite any of thousands of poems from a karaoke-type machine?

BS: Surely such a thing must exist somewhere. Sabbatini dreamed it up, with a bit of lunacy, in The Man in the Blizzard:

“What this town needs is a poetry bar. I’m not talking that spoken word shit, that’s joined at the hip to hip-hop. What I’m talking about is a bar that has a karaoke machine with nothing but good poems on it. . . I want beautifully letter-pressed broadsides projected onto the screen. I want atmospheric music playing in the background of each poem. I want a place where a guy would feel safe and cozy reading Theodore Roethke poems through the speakers . . . Can’t you see some large-lunged dude coming in to rap a sheaf of Whitman or one of Pound’s Pisan Cantos? And the women, channeling Sylvia Plath, Jane Kenyon, Mary Oliver? Think of the night when a table full of beautiful incest survivors do Sharon Olds. That’s what poetry can lead to—transformation.”

Z: Let’s get to the theme of unsolved murder. The true unsolved homicides of a young couple on the beach at Jenner figures largely in the book.

BS: Unsolved murders cast a ghostly pall over a community. That’s a charged atmosphere to plug a novel into. I’ve always liked the mixing of actual events with imagined ones. But it terms of the murders, I ‘m afraid that senseless murders are so common these days we become numb to them after the dust settles.

Z: You’re a San Francisco native, but spent decades in Minnesota as an author and editor. How would you describe your life out in Minnesota?

BS: Minnesota has a very enlightened arts community with far more funding for individual writers and artists than is offered in California. It operates almost like a Northern European country with its respect for the arts. The Twin Cities writing scene is more cohesive and nurturing in any number of ways than the Bay Area’s. Three major literary presses (Graywolf, Milkweed Editions, and Coffee House Press) have thrived there for decade. It‘s the home of The Loft, one of the country’s largest literary centers  where I worked for a number of years. All the support makes for a much tighter writing community. Writers go to each other’s readings in greater numbers than they do here.

In part, it’s a matter of geography—the Bay Area is so much more spread out. How many San Francisco writers are going to give up their cherished parking space to go to another writer’s reading in Berkeley? As a young writer growing up in San Francisco, I disliked its provincialism in thinking it was the center of the world and didn’t need input from anywhere else. I much preferred the Minnesota inferiority complex, which readily acknowledged the need for writers and artists from all over the country to come in and contribute to the community.

Z: In many ways, Nameless Dame’s narrator, Augie Boyer, shares your personal background: from the Bay Area, moved to Minnesota and worked there for many years, and now suddenly finds himself back in Northern California. Do you also share Augie’s ambivalence about returning here?

BS: No, I’m absolutely thrilled to be back in the Bay Area. When I left in 1983 at the beginning of my thirties, I believed, like Augie Boyer, that California was a difficult place to maintain a work ethic. Maybe due to it’s being laid back and so damn beautiful. I was pleased to find Minnesota, with its long winters and stoic Scandinavian tradition, a great place to work. Coming back to California, I’m a much more efficient worker, and waste no time on angst, which was my primary occupation through my twenties. That leaves plenty of time for the enjoying the pleasures of the place.

Z: Has the Bay Area you knew disappeared or is it pretty much still here? Or maybe it just exists in western Sonoma County and not so much in San Francisco anymore?

BS: I’d always lived in San Francisco, and it feels far less quaint than it did then.  It’s more corporate and slick. I’m not sure how that affects the writers and artists, but I’ve found, then and now, more difficult in the Bay Area to sustain an artist’s community.

Z: Since you’ve returned to the Bay Area, you’ve also set up shop as a publisher. Can you tell me about your new venture, Kelly’s Cove Press? How did it come about?

BS: Kelly’s Cove Press is a bit of a quixotic venture now as traditional print publishing redefines itself. Maybe it’s a way to try and build something small in the community. My idea is to minimize the horror of distribution by focusing on books of local interest, in our case California-based literary writers with cover art and, in some cases, interior art, by local painters. The premise, surely naïve, is that with the aid of a good website and a couple dozen strong independent bookstores, readers will ultimately find us and desire well-designed books of fine writing and art.

Z: Is it any more quixotic than opening up a poetry-karaoke bar?

BS: Yes, I would much rather be a fool with a bit of vision than to lay low for the duration.