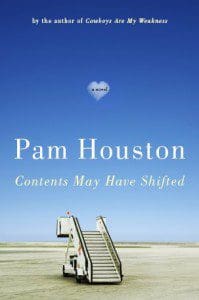 Like any MFA graduate worth their salt, I have a shelf in my library reserved for the writers I’ve also called my teachers. I mean this in a very literal way, and not in the traditional my-work-is-a-marriage-of-Joyce-and-Tolstoy way of thinking about literary influence; the majority of my artistic mentors have been living, breathing men and women with office hours on Monday and Wednesday afternoons.

Pam Houston is one such writer. As the director of the graduate program in creative writing at UC Davis, she’s sold a lot of books to fledgling writers vying for a place in one of her workshops. I’ve often heard other students gushing about her first collection of stories, Cowboys Are My Weakness, a book that in many ways carved out the themes that would remain central to her work ever since, themes that might have emerged, as one reviewer remarked, “had an intelligent woman followed Hemingway around.”


The central problem for the narrator of Contents May Have Shifted (Norton; 320 pages), Houston’s latest offering, seems to be her lack of a Hemingwayesque archetypal male – at least for the first half of the novel, when the protagonist (also named Pam) is the breadwinner in her relationship with Ethan, an environmental activist. The uncovering of Ethan’s affairs, and the ensuing emotional fall out, is one of the through-lines of conflict that appears and reappears in the novel’s geographically immense landscape, which surveys Bhutan, Newfoundland, Patagonia, Tibet, Tunisia, Iceland, Colorado and of course the campus at UC Davis.

Having heard Pam Houston read from several drafts of Contents as one of her students, I eagerly anticipated the release of the novel. Houston is an excellent reader of her own work, whose biographical nature is great fodder for live storytelling. The structure of the novel, composed of 144 vignettes, also works well for the attention span of a listening audience, who are treated to a glimmer of insight in each tightly crafted section.

Transferred to the page, however, Contents is dizzying in its array of locations and characters. The brevity of each section gives us outlines of friends and family who never quite gather flesh. Rather, the characters speak aphoristically, as the narrator quotes from their conversations, texts and emails, and the language is couched in the New Age spiritualism fostered by forays to Buddhist temples and Calistoga hot springs. At a Zen spa in Sonoma County, Pam and her friend Cinder stand buried to the neck in horse manure, prompting Cinder to muse: “Anything is possible, and I mean that in the very best way.” It is a moment, among many, where the reader feels like an onlooker rather than a participant in the novel’s catalogue of transcendental experiences.

Where Contents is at its most effective is in the unornamented accounts of the tragic history that brought the novel into being. Less than fifty pages in, Pam offers up a numbered list of suicides she has known; among them a parent, a student, and a fellow writer; and so the novel becomes a journey about recovery: an index of the sometimes desperate measures undertaken by Pam in the aftermath of trauma.

While the acupuncture sessions and adventures in globetrotting are a respite, it is the more traditional remedy of a new relationship that brings the novel to its hopeful conclusion. Despite his devotion to an erratic ex-wife, the “high brow hick” Pam meets on her journey seems to have the appropriate Hemingwayesque quality. Rick’s frustration with Pam’s jet-setting coalesces nicely her readers, who probably don’t all keep round the world tickets in their sock drawers. In the final vignette, Houston allows her protagonist’s new partner to wonder aloud “if I will ever grow up enough to realize that everything I’m searching for on the other side of the world I could find just as well at my own kitchen table.” It is a gesture toward a healthier and more rooted future for Pam, even as she imagines the sun rising over parts of the world she’ll never see.