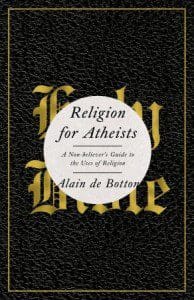 Atheists and agnostics often dismiss religion’s tenets and rituals as being fashioned to exploit the human need for such things. Our fear of death is assuaged by the promise of an afterlife. Our despair in the face of injustices that we cannot correct is resolved by the assurance that there is a spiritual magistrate in the great beyond that will set things right. Our need for “community” in an increasingly alienating world can be satisfied by formally congregating with others who share our beliefs. The meek shall inherit the earth, the first shall be the last…it all sounds perfectly, cynically, designed to capture our interest and loyalty by appealing to our weaknesses and fears.

In Religion for Atheists: A Non-believers Guide to the Uses of Religion (Pantheon, 320 pages), Alain de Botton makes the case that though our weaknesses render us vulnerable to institutions that would exploit them, we nevertheless benefit from having them addressed and catered to, and the secular world has all but abandoned us in this regard. For example, we calendarize every aspect of our external lives—we set aside time and give ourselves reminders and structure our days to address business appointments, birthdays, exercise classes, but leave our inner lives unstructured. We don’t “pencil in” time for meditation at all, let alone define which time slots we will devote to contemplation of specific aspects of our spiritual lives, like kindness, pride, love, etc. As with many goals, chores, and endeavors that we leave to chance, our souls’ exercises not committed to the diary go neglected.


De Botton’s argument is that it is possible to curate the beneficial aspects from religion while leaving the central tenet (the existence of a god) out of it. While he doesn’t believe there is a god or an afterlife to worry about, he makes a persuasive case that elements of these religions that are based in that belief can benefit even the atheistic life, and offers some ideas for their practical application. He suggests we refashion academic programs to include not only training for future employment, but courses on how to navigate our personal lives, with departments dedicated to the examination of relationships, reconsidering work, facing illness, alone-ness, and reconnecting with nature. Borrowing the Jewish “Day of Atonement” ritual, de Botton would designate a day and a ritual for making amends, something he believes gets bollixed up when left to the awkward fumblings of people (or our cowardly refusal to even try). He envisions “Agape Restaurant” where people would be required to dine with strangers and given guidelines on how to behave and suggestions for possible conversation topics beyond, and significantly more pointed, than the usual small talk: “What do you regret?” “Whom can you not forgive?” The “feast,” so integral to many religions for facilitating community and moral education via the social lubricant of dining, would be taken out of the context of religion but would retain the enriching aspects that we lack in our secular celebratory dining, which usually happens with people like us and whom we know well, and where an unwritten code of conduct often prevents people from bringing up the topics that could actually propel greater closeness with our companions.

De Botton, though clearly widely read and particularly educated on the religions from which he nevertheless remains personally aloof, writes in an accessible, elegant style, including enough references to other texts, artwork, and tradition to make his book a mini-education. Possibly more striking than his proposal for an atheist order (elements of which sometimes border on the corny, such as the imagined university’s “department of relationships”) is his ability to express the finest nuances of human frailty, pessimism, and pain: this immediately ingratiates him to the reader wary of polemic or proselytism. A particularly beautiful, devastatingly accurate, passage runs thus:

“As victims of hurt, we frequently don’t bring up what ails us, because so many wounds look absurd in the light of day. It appalls our reason to face up to how much we suffer from the missing invitation or the unanswered letter, how many hours of torment we have given to the unkind remark or the forgotten birthday, when we should have long ago become impervious to such needles. Our vulnerability insults our self-conception; we are in pain and at the same time offended that we could so easily be so….

“Alternatively, when we are the ones who have caused someone else pain, and yet failed to offer apology, it was perhaps because acting badly made us feel intolerably guilty. We can be so sorry that we find ourselves incapable of saying sorry. We run away from our victims and act with strange rudeness towards them, not because we aren’t bothered by what we did, but because what we did makes us feel uncomfortable with an unimaginable intensity. Our victims hence have to suffer not only the original hurt, but also the subsequent coldness we display towards them on account of our tormented consciences.”

Despite the complex subject matter, de Botton writes in a graceful, accessible manner, and the book is easy and entertaining to read. The same gentle wit applied to difficult concepts makes his Twitter feed (@alaindebotton) one of the more insightful and elegant usages of the social media tool. For the religious, Religion for Atheists may illuminate the purposes for rituals and doctrines that can sometimes seem arbitrary or empty. For the irreligious, it addresses the needs of the soul, which the secular world has more or less left to its own devices, and delineates a method for the soul’s cultivation independent of thoughts of god or consideration of the afterlife.

Read more from Larissa Archer at her blog, larissaarcher.com.

One thought on “The Purposes of Rituals: Alain de Botton’s ‘Religion for Atheists’”