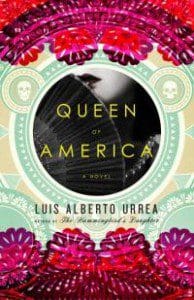 Luis Alberto Urrea is an amazing writer. The beloved, multi-prize winning author of novels, nonfiction, and poetry, Urrea’s most recent book, Queen of America, is (as I wrote in a review that appeared in yesterday’s San Francisco Chronicle) “at once magical and corporeal, grounding and transporting. … The compelling true story of a young woman caught between worlds, between her childhood in Mexico and her adulthood in the United States, between the spiritual world and the material world.” But here I want to discuss Urrea’s reading, his ability to transfix an audience through the spoken word.

The first time I came across Luis Alberto Urrea’s name was last summer. After hearing Urrea read at a writers’ conference, one of my friends posted a raving status update on Facebook, something along the lines of: Luis Alberto Urrea just melted my face off. A couple weeks later, another writerly friend wrote, also on Facebook, that we are all but ants in the world of Luis Alberto Urrea. A month after later, a third friend told me that Urrea’s readings are the ideal she aspired to one day achieve, and I thought: either Urrea’s publisher is running a highly successful guerilla social media marketing campaign or he is an amazing public speaker.

Once a staid staple of the writer’s life, literary readings have, in the past couple years, come under renewed scrutiny. Publishers looking to cut costs see book tours as an unnecessary expense that doesn’t really help sales. At the same time, some independent bookstores have started charging for readings. In response to the latter trend, freelance writer and critic Alizah Salario writes in a post on The Millions:


“The underlying problem with charging for readings isn’t the cost (though even a few bucks will deter the cash-strapped) but that the very notion of payment turns readings into something they are not: artistic commodities. Authors are not performers; their readings are not meant to be entertaining in a splashy musical sort of way. Readings exist to promote and sell books, but they also serve a more important function: they provide space for writers and readers to directly communicate and transmit ideas, taking the solitary slow drip of the reading process and infusing it directly into the bloodstream.”

I don’t think readings are “meant to be entertaining in a splashy musical sort of way” nor would I suggest that writers should put on a song and dance or pass out cookies, as Salario writes later in her piece. But I do think that a writer should try his or her best to be entertaining, whether the audience has paid or not. Writers are not performers, true. But it’s disingenuous to argue that a reading is not a performance. One could refuse to give readings a la Pynchon or Salinger (though that, I would argue, is also a type of performance). But once you are standing on the stage, once you have an audience and a microphone in your face, you are a performer. So why not try to put on a good show? As Emily St. John Mandel writes, also in The Millions:

“Reading one’s work aloud is a difficult art. Doing it well requires a certain stage presence, and a small degree of talent as a live entertainer: in other words, more or less the exact opposite of the skills you needed to actually sit down and write your book in the first place. Given that the skill sets involved in writing and reading aloud are so different, I’ve found that it’s a rare writer who can give a memorable reading. (By “memorable,” I mean “memorable in a good way.” I’ve been to some memorably bad ones.) More often than not we speak too quickly, or in a monotone, or way too dramatically when the material doesn’t call for it (“and then… she poured the coffee… into a cup.”)”

Whether the performance takes the form of Urrea’s animated raconteuring, the urgent torrent of Deb Olin Unferth and Ben Marcus, D.A. Powell’s sly sledgehammer, or Matt Bell’s poetic incantation, a good reading is memorable and inspiring. And if a reading inspires someone to pick up a book they might not have otherwise, what’s wrong with that?