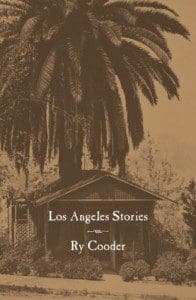 Going by musician Ry Cooder’s new book of short fiction, Los Angeles Stories (City Lights Publishers; 230 pages), L.A. in the ‘50s was a place where what you didn’t know could ruin your life, or kill you. “Everyone out there is a mad dog from Hell until proven otherwise,” claims the owner of a beauty salon in the book’s opening story, and Cooder seems intent on proving her right. Each of Cooder’s eight stories contains at least one murder, usually more. They center on ordinary people—tailors, mechanics, dentists, train conductors—whose lives are warped, derailed, or ended by the schemes of gangsters, grifters, extortionists, murderers, policemen and fanatics. These extreme characters seem to outnumber honest members of the working class by three to one, constituting a world where “behind every door, a strange world [lays].” But the tone of these stories is not as sensational as the plots might suggest. Cooder’s narrators, who speak in an entertaining smorgasbord of mid-century idioms, dialects, and Spanglish, maintain an almost humorously detached, and sometimes whimsical posture in the face these vicissitudes, giving the book a hardboiled tone.

The fun in watching a transvestite jazz singer dodge the rap on a double murder is hardly Cooder’s point. He wants to depict the small lives of people participating in major cultural shifts. One story deals with the life of a streetcar conductor after he is laid off, a casualty of L.A.’s disappearing public transportation system. And another one deals with a crooked used car salesman and the rise of car culture. Cooder inserts music, lyrics, instruments and musicians in every story, indirectly chronicling the evolution of the blues, jazz, trio, banda, and rhythm and blues. Advertisements and radio programs are given a healthy amount of space within the narratives, articulating the post-war boom in consumerism. Los Angeles Stories focuses on the negative space around the pivotal changes occurring in Los Angeles at mid-century, evoking the texture of an era that spawned ‘La La Land.’


Both Cooder’s plots and narrative structures are riddled with interesting surprises. Each story is presented as a mystery, but Cooder doesn’t offer obvious clues and an explanation at the denouement. The stories all have an unpredictably reflexive quality, dovetailing seemingly inconsequential details, making a story ripple with unexpected meaning. In one, a U.S.-born Mexican trio singer unwittingly witnesses the murder of an infamous movie critic at a screening, only to later find himself at a ritzy party populated by the stars of the same movie the critic was watching. The actors reveal to him they are implicated in the murder plot. Cooder briefly touches on their political motives, explaining that the critic was an informant for an anti-labor effort by the FBI, and wrapping it up with, “You may say it’s the cause of poor people who will never ride in a Cadillac or eat crab tacos in glass houses.”

Where other mysteries might foreground class struggles and moralizations, Stories treats them almost as throwaway themes, relegating big-picture issues to the periphery. The thematic quality of the text becomes a delightful surprise. Cooder doesn’t skirt social awareness in Stories to play them down, but to illustrate the relatable helplessness of people caught in implacable, hegemonic forces.