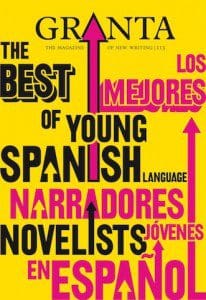 “In ten years’ time, we will see if our choices were correct, how many of the writers in this collection will have lived up to their promise, how many of them will endure,” the co-editors of Granta en español, Aurelio Major and Valerie Miles, boldly state in the issue’s foreword. (Major and Miles also served on the selection jury.)


A few of the 22 chosen writers will be touring the U.S. in May as part of a program titled “Building Bridges: Spanish and English Language Writers in Conversation.” Sponsored by a plethora of cultural organizations – the Spain-USA Foundation, the Embassy of Spain, Ministry of Culture of Spain, Duomo Ediciones (let’s just say all of Spain, basically) and, of course, Granta en español — the program kicks off on the West Coast before heading to the East.

On May 16 at Elliott Bay Book Company in Seattle, the program will feature narradores Andrés Barba, Javier Montes, and Alberto Olmos with David Guterson in conversation with Valerie Miles, Elliott Bay owner Rick Simonson and Anthony Geist, the chair of the Spanish and Portuguese Department at the University of Washington.

On May 17, the show comes to Books Inc. Opera Plaza in San Francisco. The same narradores will be joined by Andrew Sean Greer and Yiyun Li. The moderators will be Miles and ZYZZYVA Managing Editor Oscar Villalon.

These are the only stops out here. So though the events are a few weeks away, you might as well plan accordingly now.