The Strength to Endure the Worst: A Q&A with Filmmaker Tatiana Huezo 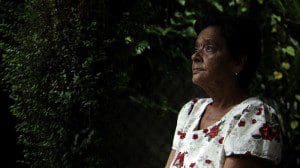 “The Tiniest Place,” the remarkable documentary by Mexican filmmaker Tatiana Huezo, records the memories of the people of Cinquera, a small town in the mountains of El Salvador that was destroyed by the military during the Salvadorian Civil War. Huezo’s debut film is compelling, formally and emotionally. (“The Tiniest Place” screened at the San Francisco International Film Festival.) We talked to Huezo about the evolution of her film.

ZYZZYVA: In the Q&A after one of screenings at the San Francisco Film Festival, you mentioned your grandmother was born in Cinquera. Perhaps we could start there and then talk about the origins of the film.

Huezo: My grandmother was the one who took me to Cinquera. She goes there often, and in one of my visits to her in El Salvador — I was born in El Salvador but grew up in Mexico — she asked me to go to Cinquera with her. She wanted to introduce me to some friends, to eat cuajada from her hometown. Cinquera made a big impression on me as soon as I arrived, an impression which stayed with me, this small place with just four or five streets, this quiet town in the mountains three hours from the capital.

Z: Your grandmother lives in the capital?

Huezo: My grandmother has been living in San Salvador for many years, but Cinquera is the town where she grew up, where all her friends are from. The old ladies there are my grandmother’s friends. The woman who sings “El Pajaro Hermoso” at the end of the film is my grandmother’s best friend.

So on the afternoon I arrived, I went out for a walk and walked into their church. It was a big empty room with barely any religious images on the walls. Instead there were rows and rows of portraits of guerrilla children, guerrilla teenagers, all dead from during the war, all very young. A tail of a military helicopter hung on one of the walls. In what kind of church do you find a helicopter mounted on the wall inside the church? This is what led me, I think, to want to know what had happened there.

The people of Cinquera were very open with me. From the start, people were telling me about things that had happened there, that their children had died, as if updating me on something I had missed by chance. I left that first time restless, knowing I wanted to come back and do more research. A year and a half later, after I’d saved some money, I returned and stayed there for two months.