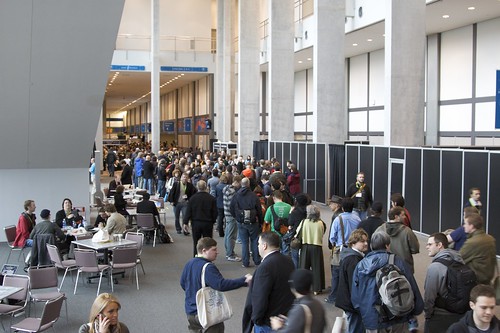 South by Southwest is a music festival, one of the country’s largest. It turned 25 this March and is always held in Austin in the spring. Half its age but just as influential is South by Southwest Interactive, the sister festival about technology, ideas and the very near future. SXSWi turned 16 this year and topped 15,000 attendees. And though SXSW’s nerdier sibling now has, according to the Wall Street Journal, “the eyes of the technical world upon it,” the festival is still significantly attended by artists, designers, business people, book publishers and journalists who wouldn’t know a line of programming code if you mugged them with it.

Writers have been coming to SXSWi since its earliest days. Science fiction novelist Bruce Sterling has given a closing day presentation for nearly a decade. Jonathan Zittrain, Steven Berlin Johnson, and Clay Shirky have all promoted books there. And I was fortunate to introduce Malcolm Gladwell before his Blink keynote in 2006.

And yet even when lubricated with breakfast tacos and Shiner Bock, South by Southwest  Interactive intimidates even the most outgoing, least literary among us. It’s big, loud, forward-thinking, and impatient with tradition, characteristics few writers affix to themselves. It is also not friendly to Luddites or slow adopters. Do you know what a “hashtag” is? Does not knowing bring you pride? If so you’ll find few kinsman here.

You should still go. I’ve attended the last 11 years and few events (perhaps BookExpo America and the invention of Twitter) have been as valuable to my own  writing endeavors as South by Southwest Interactive. I may be on the louder, impatient side myself, an ESTP disposed to hosting parties rather than crafting prose. But hang on to your doubts for a second and  allow me to break down why I’d like to see more of my literary colleagues at SXSWi next spring. END_OF_DOCUMENT_TOKEN_TO_BE_REPLACED