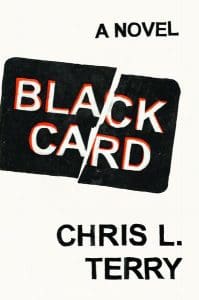 Chris L. Terry’s new satirical and funny novel, Black Card (272 pages; Counterpoint), challenges ideas about race and identity as it follows its unnamed mixed-race narrator as he navigates the complex world of the punk rock scene in the American South, trying to understand where and how he can fit in—or if he can ever fit in. Structured episodically, Terry’s novel manages to address specific and thematically relevant incidents of the narrator’s life minus an overwhelming page count.

“I was finally black again,” the novel begins, in 1997. “I sat on my bed, waiting for proof. Gray smoke oozed under my bedroom door and through the crack where the windowpane met frame.” The novel itself—like its opening line—walks a tightrope of humor and introspection. In Black Card, race is something one can lose or keep, and to obtain it you need an ally not unlike one found in a video game: somebody who tests your knowledge and then hands you a necessary item for the next task. The ally here is Lucius, who, after reviewing the events of the last few months, finds that the protagonist is finally entitled to his Black Card.


“I hereby bestow you with this Black Card. Carry it with you, as proof that you’re one of us, because …” He squinted and started to read from the back of the card, “This card entitles the brotha or sista who bears it to all black privileges, including but not limited to: Use of the n-word, permission to wear flip-flops and socks, extra large bottles of lotion, use of this card as a stand-in for the Big Joker in a spades game, and most important, a healthy and vocal skepticism of white folks aka crackers aka honkies. To be renewed in five years, upon evaluation.”

Five years later, the twenty-something protagonist finds himself crashing with his band at the home of a family that throws around the n-word like confetti at a wedding. This scene serves as the apex of a section of the novel where the narrator has already had his white bandmates ask him asinine questions about black culture, been mistaken for light-skinned famous and non-famous black men, and asked to perform all of the rap songs at karaoke night for the all-white audience. Because the narrator does not say or do anything about any of these indignities, he loses his Black Card.

“This ain’t your first time playing dumb tonight,” said Lucius…“It’s not yours no more. You let those crackers act a fool and didn’t say a damn thing. Your pale, mixed ass just sat there like some sorta white boy. So, that’s what you are. You ain’t black no more.’”

With his Black Card revoked, the narrator sets out to reclaim it. This literal quest allows Terry’s novel to explore the concept of identity, those we choose (like writer or Cross-Fit enthusiast) and those thrust upon us (like those associated with the color of one’s skin).

Eventually, the narrator is liberated from his vexing quest when he realizes there is nothing he needs to do to be black. He is black, and therefore everything he does is black and part of black culture, whether he plays hip-hop or punk rock, or works in a coffee shop or goes to college. “It was black people listening to black music. I was a black person playing black music. My experiences were black, even though they weren’t the ones I’d seen on TV and pieced together from Lucius.”

Black Card’s critical look at racial identity in America sees the cracks in everything and calls out everyone, the narrator included. It’s a brilliant comedy that speaks to what America is right now.