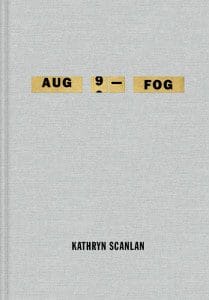 Kathryn Scanlan’s Aug 9—Fog (128 pages; Farrar, Straus, and Giroux) is short and sweet — to be read in one afternoon, then reread many afternoons over. Existing somewhere between fiction, collage, and found poetry, Scanlan’s book is composed of sentences the author pulled from a stranger’s 1968 diary, which she won in an Illinois estate auction. As Scanlan’s authorial voice blends with that of the diary owner, the two meditate together on the passage of everyday life. While reading Aug 9—Fog, I was reminded of Marilynne Robinson’s Gilead in the effortless way Scanlan glazes the mundane with meaning. Scanlan forms a collage out of the diary, which was kept by a woman in her eighties, and turns it into a series of slim vignettes that trace the seasons of a year. The book’s perspective is akin to looking out a kitchen window, observing the changing weather and the coming and going of characters:

Mildred papering. Vern took a fish down to Bayard for his birthday. Daffodils and pussy willows out pretty.

Sure pretty out. Sure grand out. D. making a new piecrust. All better.

There are certain works of poetry or prose that carry such an irresistible mouthfeel that I have to whisper along with the words as I read them, and this book offers a perfect example. The abbreviated voice of the diary’s author does not elaborate for the sake of explanation or grammar, and begins to give the impression of a lovably stylized character. Her words are almost childlike in their simple colloquialism, proving irresistibly relatable:


Jar broke, she canning tomatoes. Our apples not a bit nice. So spotted.

Scanlan’s arrangement of the author’s words render a tender and human portrait of old age, relating daily experiences of illness, hobbies, care from family members, and loneliness. One of the book’s most salient themes is the physical body and the fragility of its health. There are delicate passages in which family members wash the aging author’s head, and there are oppressive passages in which characters grieve disease and death. Scanlan’s authorial focus on seasonality and emergence suggest the hope of turnover, but it is difficult to shake the author’s uncanny details of daily life after loss.

Ever where glare of ice. We didn’t sleep too good. My pep has left me.

Aug 9—Fog is fascinating, particularly to young writers still making sense of form and genre, since Scanlan’s authorship is editorial: the words are not her own, and yet the book and its plot are her artistic creation. Her prose pursues an object of fascination and presents it with the language most fitting, regardless of convention.