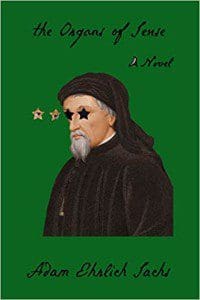 Gottfried Leibniz may have discovered calculus, but really he had the soul of a novelist. You might be forgiven for thinking so, anyway, after reading Adam Ehrlich Sachs’s first novel, The Organs of Sense (227 pages; FSG), which tells the story of a young Leibniz, hungry to understand the world, its inscrutable rules, and its even more inscrutable inhabitants. You might also see the novelistic sensibility in Leibniz’s philosophy. Calculus offered a neat method for the world and its rules, but neat methods aren’t all that useful unless you’re trying to ace the SATs or go to the moon. It’s a genuine boon to human thought that Leibniz’s groundbreaking work in mathematics did not get in the way of his inventing a rather batshit metaphysics of his own, the Monadology, which basically posits a simple substance—the monad—endowed with intention and appetite, busy at work acting as the substrate of the universe. Luckily for Sachs, it’s quite possible, probably even necessary, to be a world-historical genius with an innate understanding of the underlying structure of the universe and a weirdo with a crackpot theory.

Since the world is a plenum all things are connected together, and every body acts upon every other, more or less, according to their distance, and is affected by the other through reaction. Hence it follows that each Monad is a living mirror, or a mirror endowed with inner activity, representative of the universe according to its point of view.

It’s just about the perfect metaphor for human interaction and, even though it doesn’t appear in the novel, it’s the kind of deep background that might have made Leibniz an especially appealing investigator into unusual phenomena. The Organs of Sense opens with word reaching a young Leibniz, fresh off a failed attempt at a law degree, of a mysterious astronomer’s prediction:

At noon on the last day of June 1666, the brightest time of day at nearly the brightest time of year, the Moon would pass very briefly, but very precisely, between the Sun and Earth, casting all of Europe for one instant in absolute darkness, ‘a darkness without equal in our history, but lasting no longer than four seconds,’ the astronomer predicted, according to Leibniz, an eclipse that no other astronomer in Europe was predicting…

Note the coiled sentence structure, slightly parodic academic tone, and nested narration—all constant features of the novel. Leibniz’s every thought and action is mediated by a conjectural scrim, and the narrator sometimes draws on extant writings or other, more spurious, attributed language. This narrative voice does, in fact, belong to a character—there is an “I” attached—but the absence of a locus of narration or any identifying clues (except that he is a translator, which is mostly a recurring half-joke) makes it hard not to make your inner novelist queasy by throwing up your hands and saying it’s probably just Sachs himself.


The astronomer, who claims to possess “the longest telescope known to man, and therefore the most powerful, a telescope said to stretch nearly two hundred feet,” is not merely scientifically gifted but possibly oracular, “not merely completely blind…but in fact entirely without eyes.” Being “an assiduous inquirer into miracles and other aberrations of nature,” Leibniz sets off at once, and before too long he finds himself in the astronomer’s tower, somewhere in Bohemia, trying to figure out whether this eyeless man is off his rocker. How is he to know?

The problem of getting inside another head, and seeing what that head was seeing (or not seeing) and what it was thinking (or not thinking), now struck Leibniz as a profoundly philosophical problem. Neither cradling it nor cracking it open would do it, for the barrier involved not only bone but also a thick layer of philosophy. The human skull consists, one might say, Leibniz wrote, of a quarter-inch-thick layer of bone and a quarter-inch-thick layer of philosophy. Of course the brain is also cushioned by various membranes and fluids. A skilled doctor can penetrate the skull with a drill, and he can cut through the membranes with a knife, and he can drain the cerebral fluids with a pump, but his instruments are utterly useless for penetrating that solid, condensed layer of philosophy. “Even the most state-of-the-art medical instrument wielded by the best doctor in Paris will simply bounce off the cerebral-philosophical membrane,” Leibniz wrote. That left language.

Anyone who’s ever been stuck at a party trying to have a meaningful conversation with a philosophy student knows that a quarter inch can seem awfully thick, and language is itself an imperfect instrument. What follows is a self-consciously tangled pattern-building exercise, as the narrator relates the astronomer’s tale, as told to Leibniz, of how he lost his eyes—basically the story of his life as an aspiring chronicler of the cosmos in Bohemia. His father hopes to curry royal favor by presenting a show-stopping mechanical head to Emperor Rudolf, King of Bohemia, descendent of the august Habsburg lineage, and holder of sundry other titles. In the first great Greek tragedy of the astronomer’s life, he betrays his father in order to be installed as the Emperor’s Imperial Astronomer. There is genuine movement and pathos to this part of the story, but it mostly sets up a suspended preamble to the astronomer’s sudden turn into eyeless-ness, meaning it’s an opportunity for copious riffing. To wit:

Then his father went to bed and the astronomer—by the light of a single candle lit only after he heard his father’s sixth snore, for one snore could of course be faked, as could two snores or three, even four simulated snores is not unthinkable if his father had suspicions, and the idea of feigning five snores to catch your son in some verboten act is, if absurd, not impossible, whereas after six snores his father was probably asleep—read, for example, the portions of Friar Bacon’s Opus Majus concerning the physiology of vision or his Letter on the Secret Workings of Art and Nature with its depictions of those ingenious devices of antiquity that according to legend made distant things seem near or near things distant…

Sachs runs these perspectival recursions often, and while all are smart and some very funny, many only have the tone of being funny, and don’t really work. When they do, though, they follow an absurd and exuberant logical momentum and accrete surprising valences, like a cartoon snowball rolling downhill. In one riff, a ditty about a butcher chopping a pig into limit-approaching sections (quarters, halves eighths, sixteenths, etc.) turns out to be an ode to the beautiful insanity of the infinite: “The song, [the astronomer] realized, had taken a mathematical turn.”

What is the point of all this? One of Sachs’s characters conveniently offers an explanation on his behalf, telling the astronomer that “the true artist walks straight toward the insignificant, while slyly keeping an eye on the significant, and moving at all times away from the gorgeous…” Indeed.

The astronomer finds himself caught up in some palatial intrigue having mostly to do with the Habsburg brats, whose names I couldn’t keep straight. Here, as the novel sprints toward the insignificant, it begins to wobble a bit. It’s not clear whether we’re supposed to care about this submerged plot, or even to follow it. The problem is not necessarily that these sections are syntactically convoluted or demanding. It’s that, as the voice luxuriates in its own convolutions, it teaches you to pay less attention, to gloss. I suspect Sachs knows where the reader’s attention is likely to ebb and flow, and, again, he suggests a larger reason: “One wants above all to understand the Sun,” says the astronomer, “but one cannot aim one’s telescope right at the Sun!” The “sun,” in this case, might also be the thing we want to communicate. Sachs knows that seeing into someone’s head requires their head to do a lot of work with language in order to produce a series of gestures back toward some always-inarticulable idea. Not every utterance is worth paying attention to, unless you’re the one talking.

We are periodically re-situated in the tower, where the clock is ticking on the astronomer’s prediction. A cat, Linus, stalks the room. (A perfect syllogism, courtesy of the astronomer: “A man delighted by a cat is discomfited by existence, a man delighted by existence is discomfited by a cat.”) The astronomer occasionally presses socket to telescope and writes down long strings of numbers, a refrain that mostly works to remind us that Sachs is in control.

But his is a fine control, and it’s surprisingly propulsive, this mystery of whether the forecasted event will occur—at once banal (four seconds in the dark, big deal) and galactically meaningful (the sun occluded for four seconds is a very big deal for those of us who rely on its warmth and light for our survival). It’s a kind of structural suspense, reading to see whether Sachs will pull it off, wondering which threads will be tied neatly, which left frayed. Wondering what, for God’s sake, happened to the astronomer’s eyes! Happily, the dénouement of the novel is excellently wrangled, and its grotesquerie depends in part upon a demonstration of the horrors of a vacuum, which made me wish that more inventors had shown up in its pages to blow everyone’s minds. (To be fair, there’s also the aforementioned mechanical head, a perpetual motion machine, and more.) Sachs’s chosen historical moment bristles with so much metaphysical weirdness in large part because discovery and mysticism are not yet at cross-purposes. Cutting-edge scientific discoveries are intimations of reality’s as-yet-unexplained properties and thus, in their uncanny mixture of the mechanical and the unimaginable, seem tinged with magic.

The Organs of Sense, too, turns out to be more than the sum of its parts. Sachs has written a misdirecting novel about the pleasures and perils of misdirection, and the contraption works exquisitely, proving that it is impossible to be a person on whom nothing is lost. I must be one of those cat-lovers discomfited by existence, because after uncountable moments of frustration, by the novel’s end, I was actually charmed to feel that I, like Leibniz, was the butt of some cosmic joke. The Organs of Sense invites us to wander around in Sachs’s head; of course it’s messy and annoying. On the verge of throwing the book across the room, I would reach an unanticipated reprise or an incredible morsel of history or the end of a deftly completed feedback loop, cackle gleefully, and fall back in love. The people around me might have felt their constituent monads twinge and wondered, if only for a moment, what was going on in my head.