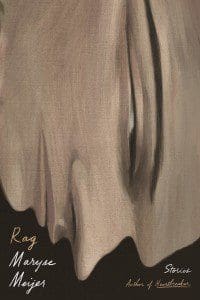 In Maryse Meijer’s new collection, Rag (144 pages; FSG), the final and eponymous story is written from the point of view of a rag stuffed down a woman’s throat, slowly killing her. Reading Rag feels a bit like this, as the fourteen unsettling stories leave you gasping for air. With terse, dark prose, Meijer has created a cohesive set of stories which seem to delight in exploring taboos and destroying expectations.

These stories are unsettlingly honest, with the most twisted inner thoughts of each principal character laid bare for the reader. Rag is at its strongest when delving into the minds of its uniformly flawed narrators, which include a college student living in self-imposed isolation, a high school teacher consumed by an unhealthy obsession with his student, and a pizza shop worker who develops feelings for a woman who has a miscarriage in his store’s public bathroom.


Many of the stories focus on themes of self-injury, dubiously consensual sex, and disordered eating, Meijer refusing to flinch from their alarming details. One of the collection’s most compelling stories follows a father serving on the jury for a murder trial while attempting to reconcile with his estranged daughter. Another focuses on a homicide detective who, over the course of an investigation, becomes convinced being decapitated by his principal suspect would be the only fitting end to his life. In a particularly powerful passage, Meijer reflects on the detective’s perceptions of the case and his work:

The detective keeps a photo of the dead man’s head; there it is, intact, stuck to a bulletin board. You’re going to die, the detective thinks every times he looks at the ugly happy face…He strokes the glossy photo and thinks of all the women he has known, all the meat inside a man. How often it is the other way around: the woman in pieces, and every man a murderer.

Twelve of the fourteen narrators are male, allowing Meijer to explore their varyingly warped perceptions of women. In deconstructing the many forms of the male gaze, she grants insight into the roots of each character’s neuroses and fixations, skewering the most extreme manifestations of toxic masculinity. The haunting, beautifully horrific stories in Rag linger long after finishing the collection, and subtly answer almost as many questions as they raise about what it means to interact with and be a man in the modern world.