Sadly, there are only so many hours in a day. For even the most diligent among us, it can be difficult to stay on top of all the classic books that demand to be read. Here at ZYZZYVA, we took this rainy San Francisco January as the perfect excuse to sit down and finally catch up on some of those iconic works our staff has missed out on (at least until now): 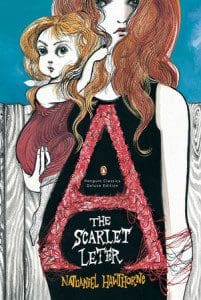 Laura Thiessen, Intern: With the New Year comes new resolutions. Unfortunately, most of them fail by the time we turn the calendar page to February. Perhaps it might be better to read about someone else’s resolution instead. Nathaniel Hawthorne uses the idea of resolution, or transformative action, to engage readers of The Scarlet Letter. I recently reread this classic novel about sin, shame, and social stigma and found it a great inspiration towards sticking with one’s resolutions.

A New Year’s resolution is, in a sense, a confession that something hasn’t been working and needs to be changed. In the same way, the Puritan concept of public shame and ostracizing those who did not conform to standard was also a method of transformation.

An old, and now obsolete, definition of resolution is a ‘softening of a hardened mass in the body’. This definition was still around when Hawthorne was writing The Scarlet Letter, and I like to think it was floating in the back of his head while writing. Hawthorne also seems inspired by the adage, ‘confession is good for the soul’. Conceivably, he thought that to soften something hard within a person’s character, confession is a tool towards transformative action.

The contrast between Hester’s forced, public confession and Reverend Dimmesdale’s private, self-tortured one is stark. Hester, though shunned by her community, comes to understand them, and later, they feel understood by her. She is at peace. Whereas, the Reverend keeps his confession to himself and his transformation is to death.

If public confession creates change in a good way, then I ought to confess my addiction to Reese’s Peanut Butter Cups. I can only hope this admission will lead to a resolution that sticks. 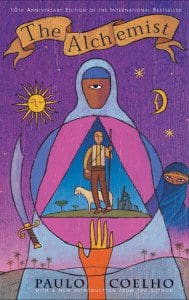 M.M. Silva, Intern: I was so excited to finally read The Alchemist. One of my English teachers in high school told me it was her favorite book, and knowing how well-read she was, I thought it might very well become a favorite of mine as well.


The story opens with a debrief of the life of a shepherd boy, Santiago, who possesses a great desire to travel. As he goes about moving his flock to his next destination, he is stuck wondering about a recurring dream. The dream centers on his discovery of a treasure near the Egyptian Pyramids, but never shows him where exactly the treasure is. Eventually, Santiago chooses to go to an old woman who interprets dreams. He ends up leaving having promised to give her one-tenth of the treasure upon finding it, yet he doesn’t feel confident enough to give up being a shepherd and go searching.

As he continues to go about his daily life, he encounters another person that encourages him to seek out the treasure, a King named Melchizedek who initially comes off as a nuisance to Santiago. However after getting to know the King further, Santiago feels enlightened by his words and inspired to seek out what Melchizedek calls a “Personal Legend,” which he defines as “what you have always wanted to accomplish.” This leads Santiago to give in to spontaneity, giving up his life as a shepherd to chase his “Personal Legend” and find the treasure of his dreams.

From that point forward, Santiago has many further encounters and endeavors that teach him about his purpose in life as well as his capabilities. This involves the titular Alchemist of the book, as well as the pastoral roots from which Santiago initially arose from.

The story is quite allegorical and encourages reflection on one’s own “Personal Legend.” It alludes to Biblical stories and phrases often, and might serve as a motivational resource for those who find themselves facing any kind of crisis or challenge. 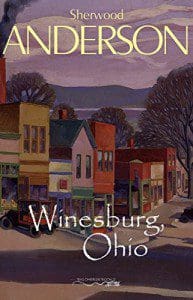 Zack Ravas, Editorial Assistant: Despite what the author himself claimed in numerous interviews, Sherwood Anderson’s 1919 effort Winesburg, Ohio is likely not the first instance of a short story cycle, or novel-in-stories. The cycle is a form that can trace its origins back to much older works such as Chaucer’s The Canterbury Tales and One Thousand and One Nights, with even Winesburg, Ohio preceded by the likes of Anderson’s friend and mentor Gertrude Stein’s Three Lives. But there’s little denying Winesburg, Ohio as one of the best examples of its genre, and it was a pleasure to finally visit a story collection I’d heard so much about during grad school.

Our setting, aptly enough, is a fiction small town in Ohio at the turn of the 20th century. Anderson offers each of the book’s twenty-two short stories as slice-of-life vignettes, detailing the everyday struggles of Winesburg’s population. Characters who drive the engine of one story may reappear later as a mere background player. Although Sherwood Anderson denied the Russian writer’s influence, it’s easy to read Winesburg, Ohio as something approximating an American Chekhov. Anderson displays a similar aptitude for honing in on the quiet desperation of those individuals we walk past (and overlook) everyday. In one of the book’s most dazzling passages, he writes of Kate Swift, the town’s local schoolteacher, 30 years-old and still unmarried:

Although no one in Winesburg would have suspected it, her life had been very adventurous. It was still adventurous. Day by day as she worked in the schoolroom or walked in the streets, grief, hope, and desire fought within her. Behind a cold exterior the most extraordinary events transpired in her mind. The people of the town thought of her as a confirmed old maid and because she spoke sharply and went her own way thought her lacking in all the human feeling that did so much to make and mar their own lives. In reality she was the most eagerly passionate soul among them…”

Winesburg, Ohio provides further literary proof that all human tragedy great and small can just as easily be found in a town with a population of less than three thousand. 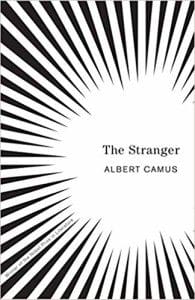 Peyton Harvey, Intern: In The Stranger, Albert Camus reflects on the absurdity of existence. The format of the novel allows the reader to engage with the existentialist philosophy on an intimate level.

The tale opens with Meursault’s indifferent account of the death of his mother. He receives a telegram stating, “Mother deceased. Funeral tomorrow. Faithfully yours.” His response: “That doesn’t mean anything. Maybe it was yesterday.” He writes with negligible emotion – recounting the logistics of the visit he must make to the house where Maman was staying.

Throughout the novel, the narrator appears to desire the palpable and observable – that which he can sense in his immediate surroundings. He is attracted to his lover Marie when he is with her. He longs to touch her, and be with her. Yet when she is away from him, he does not care about her or if he will see her again. He does not see the purpose of caring for someone if they are not there.

There is a strange series of events, which results in Meursault killing a man. He is arrested and sent to court. He attempts to convince the jury that this act was premeditated. From the perspective of the other characters, Meursault is inhuman. The prosecutor says he sees “nothingness” in the soul of Meursault.

However, as Camus brings us into the mind of the narrator, we see that he does indeed possess desire, and even hope. He longs for what is instinctual, not the contemplation of unknowable ideas or anything he does not sense in his immediate surroundings.

He does not feel remorse, and is sentenced to death.

He concludes, “Everything was happening without my participation. My fate was being decided without anyone so much as asking my opinion.” He cascaded into this crime, with each act aligning with the other to culminate in this absurd murder.

Camus speaks of the guillotine as an absurd occurrence with death. As one approaches the guillotine, he may not wish to be killed, however it is in his best interest for the blade to run smoothly, without a hitch – a perfunctory plunge.

Although, he finds little meaning in questions of God and religion, the narrator finds beauty in immediate moments. When he is in prison, he only desires Marie, the shapes and senses of her. He misses the joys of living:

Smells of summer, the part of town I loved, a certain evening sky, Marie dresses and the way she laughed…. I wanted to squeeze her shoulders through her dress. I wanted to feel the thin material and I didn’t really know what else I had to hope for other than that.

Perhaps The Stranger is so entitled to emphasize the chance of his encounter with this person. Meursault did not know the person he killed- but because of this stranger, he will be killed.

The end may come as a mild relief as the reader has inhabited the bleak mind of Meursault.

Camus wrote in the vein of the absurd, lifting the veil off of artificial meaning. While pondering those questions of faith he does not become despondent, rather he looks to other forms of meaning. He finds them not in the intangibles of God and belief, but in the here and now.