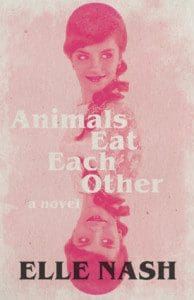 Elle Nash’s first novel, Animals Eat Each Other (121 pages; Dzanc Books), opens with a pair of quotes from Wal-Mart’s Vice President and shock rocker Marilyn Manson, offering readers their first clue as to what kind of milieu Nash is about to immerse them in. It’s one where big box stores encroach uncomfortably on property lines, where meals are more often microwaved than cooked, and teenagers rifle through their parents’ medicine cabinets in search of opioids. The setting is Colorado Springs, a predominantly white town in a county where the majority of voters cast their lot with Donald Trump in the 2016 election; but Animals Eat Each Other’s lens is trained on a different era.

The story opens in 2005 as it’s unnamed nineteen-year-old narrator (who will come to take the name Lilith) feels somewhat adrift in life, sleeping with the manager at her strip mall job, casually partaking in drugs and alcohol, and quietly moving around her trailer at night to avoid her mother, who hasn’t been the same since the death of her husband. “My hobbies included touching myself, drinking cough syrup, and flirting with boys at RadioShack,” she observes. “Could I be anything else?”

Circumstances change when her co-worker Jenny introduces her to a young couple named Matt and Frances, who manage to maintain a hedonistic lifestyle of metal shows and raves despite having an infant at home. The slightly older duo quickly take to our narrator, and dub her Lilith, after the figure in Jewish folklore said to be Adam’s first wife and made from the same dirt as him rather than his rib. Lilith soon learns Matt and Frances are self-professed Satanists, for whom traditional Christian mores hold little significance; Matt declares their beliefs, “A rejection of the puritanical world that is always pulling you outside of yourself and asking you to serve others shamefully. Always asking you to turn the other cheek.”


As Matt and Frances initiate a sexual relationship with Lilith, the trio forms a fragile unit in which jealousy and possession are constantly shifting scales. Though the book is less a coming-of-age tale than a brief and blurry look back at Lilith’s wild teenage days, our narrator nevertheless comes away from this emotionally-charged experience with hard-won observations about intimacy and gender dynamics. She is constantly forced to question if her relationship with Matt and Frances is the liberating middle finger to “family values” it feels like during their headiest moments (“I wonder if in the past, people lived like this,” she muses. “Sometimes it felt tribal to be this way, as if we were a group of degenerates, isolated but entwined”) or if she is merely a pawn the couple has deployed in an attempt to gain dominance over one another. Telling her tale from a place of hindsight, Lilith acknowledges she may have merely represented something new and unspoiled to a pair combating the doldrums of monogamy: “When you don’t live with someone, you don’t get to see their imperfect facets. The mean side of them. The impatient, ungrateful side.”

Along the way, Nash peppers the novel with rich details, from her description of Lilith taking Special K at a party (“I felt like a bag of marshmallows, plastic and all, expanding and melting inside of a safe, hot microwave”) to the catalog of less than nutritious meals comprising Lilith’s diet: pizza Hot Pockets and Hamburger Helper, Doritos, and ranch-flavored sunflower seeds (“After a few dozen, the ranch dust started to taste like vomit”).

The novel’s brevity works in its favor since the narrative’s fleet-footedness reflects Lilith’s lack of deliberation. She often operates on impulse, which tends to create a briar patch of her closest relationships. While Matt and Frances’ Satanist beliefs may be more informed by Marilyn Manson lyrics than any religious text, they nevertheless leave the couple prone to pursuing self-pleasure no matter the emotional cost. “Everyone has this demi urge to destroy and to create…wanting to serve yourself isn’t a bad thing,” Matt advises. Before long, Lilith comes to recognize her own destructive power. “I could feel the manipulative part of myself light up like a highway at dusk,” she declares as she continues to lie and toy with the people closest to her, including Matt’s friend Patrick, who has a newborn of his own.

Lilith’s choices bring an inevitable reckoning, but it is her bond with her best friend, Jenny, that creates a pocket of human warmth amid the wreckage of Lilith’s fizzled hook-ups. “I felt ashamed and jealous that she could know so much about me when I didn’t understand why I was doing what I did at all,” Lilith says when Jenny reads her Tarot cards. Their relationship may have its complications, but it ultimately provides Lilith with an anchor of stability during the fallout of her experience with Matt and Frances. “When she looked at me it was different than how Matt saw me,” Lilith observes. “Jenny seemed to leave herself and move into me.”

Early in Animals Eat Each Other, Nash briefly takes us to what is ostensibly the present moment, to Lilith in front of her computer and scrolling through Matt and Frances’ Facebook feed. The two are now married and smiling in picture after picture. Lilith laughs ruefully, noting it’s “as if nothing I’m about to tell you ever actually happened.” It should be a familiar scene for anyone who’s ever spent a late night basking in the glow of a laptop as they explore an ex-lover’s digital footprint, searching for some indication of where things went wrong. “There is a way people damage you, a way they’ll change the structure of your DNA, the way your brain is wired,” Lilith says. But her story proves that even among the soured memories, we might “retrace the constellation of every event” and find a reminder of our resilience.

One thought on “Original Sins: ‘Animals Eat Each Other’ by Elle Nash”