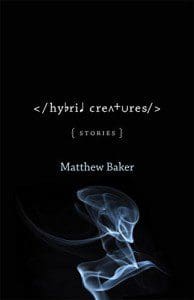 Matthew Baker’s characters nurture obsessions. In his story collection Hybrid Creatures (126 pages; Louisiana State University Press), each of his protagonists carries a passion for a particular field, whether it’s mathematics or music, to the point that their fixations bleed through into the text of their stories. The narrator of “Movements” is so buoyed by his love of the symphony he can’t wake up to a morning cityscape in Nashville without experiencing it in musical terms:

“…a shopkeeper in cowboy boots heaved a security shutter up with a crash {piano}, somewhere a jackhammer was slugging {mezzo-forte} pavement, a sheet of metal covering a pothole in the street clapped {pianissimo} when run over by a taxi, somebody was periodically flinging objects made of glass, maybe bottles, into an empty dumpster, where the glass would shatter {staccato}…”


These and other more unusual (and complicated typographic) ways of illustrating his characters’ preoccupations appear throughout the collection, such that Baker takes the time in the Acknowledgements to thank the crew at the printer, who “worked spiritedly and tirelessly to accommodate all of the special formatting and symbols in this book.

Baker’s stories read as crisp and minimalist, dictated to the page with a precision not unlike those same mathematical principles Tryg is so fond of. The opening piece, “Coder,” re-contextualizes computer hacking for the martial arts genre, as a younger hacker goes in search of his mentor—or “Sensei”—who has gone missing, ramping up the mood of paranoia so prevalent in stories about data and surveillance.

“Coder” contains more action than the rest of Hybrid Creatures in that the activity moves from one location to another; more often, Baker places his characters in a static milieu—locked on a hotel rooftop overnight or wandering the hallways at a crowded family gathering—as they face some kind of internal dilemma: The narrator of “Movements” must rediscover the meaning behind life’s cacophony of sounds after the death of his long-term partner, while Tryg tries to savor the last few hours with his mother and her new family in the suburbs before being shuttled back to his father’s farm.

The centerpiece of Hybrid Creatures, and arguably its most accomplished work, arrives last with “Proof of the Century,” a story that follows a curmudgeonly grandfather, Willis, navigating a party where his large family has gathered. The character, who has made a career in industrial agriculture, comes to the painful realization he may be suffering from dementia, and that he has not only lost some of his mental faculties but perhaps his beloved wife as well. Refreshingly, Baker treats this revelation not as a dramatic plot twist, but as a quietly devastating unveiling. He displays further deftness in how he weaves overheard conversations throughout the house into the story, often to add humor or to contrast the guests’ self-absorbedness with Willis’s determined mission to locate his wife.

His lifelong belief in the overriding Logic of the universe hinges on finding her, but that belief is threatened by not just the possibility of his wife’s absence but by a dawning understanding that Willis’s work may have had a disastrous effect on the environment. Again and again in Hybrid Creatures, we see that the pursuits in life that edify and elevate us, which help shape our daily routines and provide a sense of purpose, rarely prepare us to face life’s greatest hardships. That we must do, like so many things, on our own.