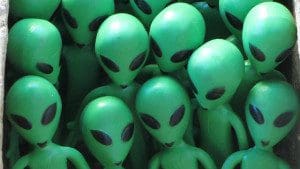 With my generalist title of “Office Manager,” I am aware that many here at Quest
Industries can’t help but consider me a jack of all trades, even if the current description
for this position does not include dispelling rumors related to supernatural phenomena
such as ghost or UFO sightings. Be that as it may, I am happy to provide this service
despite its absence from my detailed list of job duties.


Fred Sagen, CFO, who is near retirement and admits to failing eyesight, nevertheless
swears on his life that he saw a UFO hovering outside his office window six evenings ago
when he was here working late on the quarterly earnings statement. As an armchair UFO expert, I was intensely interested when Fred, quite shaken, approached me the next
morning with his story and asked if I might be willing to investigate. In short order, with
the help of Julie Jagger in R & D, I was able to attach a motion-detecting camera to the window through which Fred spotted the glowing pale orange sphere that caused him such alarm and concern.

Nothing of note was recorded by the camera for the first four nights after its installation,
but last night, I am happy to report, it captured several geese flying past the window at an oddly late hour as well as what appeared to be a weather balloon plummeting to its
demise on the cement sidewalk many feet below Fred’s and our offices.

There was no UFO, however, and this leads me to believe that Fred’s myopia and probable glaucoma caused him to see something that wasn’t there.

Please rest assured that the motion-detecting camera will remain in place for another
week, possibly two, in case a bona fide UFO does reappear outside Fred’s office window,
but this seems unlikely, and Fred also admitted earlier today that he might have been
hallucinating, as he has had chronic insomnia for years. At times his hallucinations have been so onerous that last spring his physician barred him from operating motor vehicles, but Fred informed me the ban was lifted three weeks ago and so far, so good.