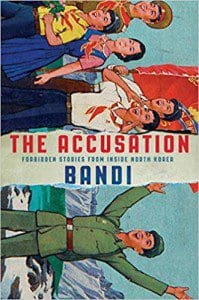 The cover of The Accusation: Forbidden Stories from Inside North Korea (248 pages; Grove Press) boasts a brightly colored piece of North Korean propaganda featuring six luminous, smiling faces. The seven stories in the collection, however, offer something very different: heart-wrenching accounts of a brutal life inside the country’s borders.

The Accusation’s journey to publication is miraculous in itself. Its author, Bandi (a pseudonym meaning “firefly”), smuggled his manuscript out of the country with the help of a defecting family member. For more than four years, he secretly wrote the manuscript, entirely in pencil, and remains in North Korea where he serves as a member of the Chosun Writers League Central Committee, a state-funded writing organization. Bandi’s book represents the first published work to criticize the North Korean government written by someone still living in that country.


The stories in The Accusation center on the importance of one’s reputation in North Korea, and how quickly it can be ruined by rumors and accusations of one’s opposition to the government. In each story, the characters experience a longing to break free of the societal pressure that restricts their intimate relationships. “City of Specters” reveals the absurdity of how even the most minor acts of can earn someone the label of anti-revolutionary. In it, a mother who uses extra curtains to protect her sensitive child from seeing a poster of Karl Marx that frightens him is quickly marked as a threat; a civil servant explains to her how unique curtains could be seen as a signal to spies. And while the rigidity of the government’s demands is so bizarre as to be almost humorous, Bandi depicts how these demands place a barrier between people. One must choose between being a good citizen and being a good family member, and choosing the latter most often results in punishment.

In these stories we see the ways this fear makes North Korea into a country of trained actors; to simply survive, its citizens must repress their grief and anger, even in the face of lost loved ones, and produce exaggerated performances of mourning for the death of Kim Jong-il. The characters in this book smile through their physical and emotional pain, only calling on these hidden agonies when tears are necessary.

The final piece in the collection, titled “The Red Mushroom,” suggests the author’s self-contempt and dissatisfaction with his career. Bandi writes about a reporter who is commonly referred to as the “bullshit reporter” since his work only praises the government or spins stories to the point of fabrication. This is, of course, due to the severe limitations put on North Korean journalists. Like his protagonist, Bandi is a state-sanctioned writer who must acquiesce to political restraints on his writing. The story raises the question of what it means to be an artist of any kind in Bandi’s country or in any other totalitarian state. While the cast of The Accusation would likely argue that it means one must be a liar, Bandi’s work speaks to our irrepressible need for self-expression and drive to create art. His writing and characters prove magnetic; they are anything but the one-dimensional characters of North Korean propaganda.