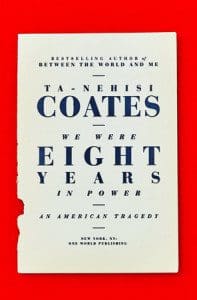 Ta-Nehisi Coates will be the first to tell you that his road to becoming a celebrated essayist, author, and staff writer at The Atlantic began with failure. Failure to keep a job. Failure to graduate college. Failure to write exactly what he felt needed to be said. So begins his recent essay collection, We Were Eight Years in Power: An American Tragedy (Random House, 367), which, contrary to Coates’ inauspicious start, cements his reputation as a gifted, iconoclastic writer and serves as required reading for anyone concerned about how, and when, black lives have (not) mattered in American history. The book is separated into eight parts, one for every year of Barack Obama’s presidency. Each section contains a present-day self-reflection and a look at the goings-on of that particular year, followed by an original essay by Coates previously published in The Atlantic.

The collection, in an attempt to quickly capitalize on Coates’s spotlight, could have been a lazy mix of vague recollection of events and re-presentation of previous work. Not so. These prior essays are so richly written they reward a second (and third, and fourth) read. His arguments–on mass incarceration, studying the Civil War, etc.– have not lost their initial force, and in fact have been invigorated by the current political maelstrom we find ourselves in. Additionally, the commentaries preceding each essay are remarkable essays in themselves. Coates uses them to re-evaluate the successes and failures of his work, to add cultural and personal context to each piece, and to reflect meaningfully on the directions he and his country have gone. There is no fluff or languorous storytelling here. The chance to publicly, rigorously question and explain one’s previous work is a gift few writers are ever granted, and Coates does not waste the opportunity.


The highlight of the collection is the essay that first brought Coates to national prominence: “The Case for Reparations,” a feature article published in The Atlantic in June 2014. While none of the other essays are weak links in any sense of the term, “Reparations” can and should always stand above the rest, for its taboo subject matter and sheer moral certainty if nothing else. The idea of the US government paying reparations to black citizens for slavery is “a wildly impractical solution” to some, as Coates admits he once believed, if not an absolutely laughable one to others. Coates is a patient writer, a rarity in the twenty-four hour news cycle of hot takes, and the persuasiveness of his arguments is burnished as a result. He never bows to lowered expectations when he finds the fire in his argument, nor sacrifices seeing the forest for finding each tree. The rise and flow of each essay isn’t truncated to serve the smaller anecdotes that form the emotional core of his book, but works with them to create a genuine portrait of black lives in America.

We Were Eight Years in Power also demonstrates how incredibly well researched his work is. Somehow, Coates tells readers, white and black, facts we didn’t know (for example, that black families making six figures often live in neighborhoods where white family incomes are near the poverty line) and re-frames facts we did know (such as the tenuous class mobility of black families) creating arguments that are both unsurprising and shocking. We have always known that racism affects homeownership, but many of us have overlooked the participation of the U.S. government and viciousness of white property owners in creating that reality. Coates will not let us look away any longer.

He writes philosophically and thinks historically, without obscuring our current moment in time. When he writes, “The need for purpose and community, for mission, is human…It is that search [for meaning] that bedeviled the eight years of power,” Coates sees what many do not—that though we have only our own eyes and ears to experience the world with, our personal developments are part of the history we come from. Coates life growing up black in Baltimore is his own. No one else can account for what he did and saw. However, those experiences are not divorced from what happened in New England colonies in the 17th century, or at Gettysburg in 1863, or in the streets of contemporary Compton. Coates weaves all these threads together as though they were never separated at all, never sacrificing each component’s singular character.

Reading and re-reading Ta-Nehisi Coates is a special experience. Writers frequently pride themselves on making the act of choosing each word seem effortless, invisible. Yet Coates chooses to keep the curtain up, all too frequently reminding his readers that he still feels like an imposter–a black Howard University dropout working at The Atlantic?–and that he has been making it up as he goes for a very long time. All work worth doing is done painstakingly, but Coates’ honesty about the difficulties of thinking and writing intellectually is startling. His forthrightness actually makes the book more difficult to criticize, since he admits his own mistakes so plainly it leaves very few for the rest of us to find. This collection is a worthwhile read for its breadth, academic rigor, and shattering prose, but it deserves special attention for its self-portrait of a black writer finding his way. Every American should read this because Coates so effectively challenges our mythologies and assumptions with real data and human stories. But every writer should read it because nowhere else will a writer ever be so brutally forthright about the (political) struggle of writing itself.