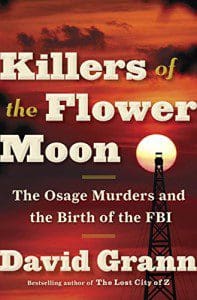 In a time where many of us are revising our understanding of American history, David Grann’s Killers of the Flower Moon: The Osage Murders and the Birth of the FBI (Doubleday, 339), presents another world of facts some have attempted to forget. The book, a 2017 finalist for the National Book Award in Nonfiction, is a work of stunning archival research whose prose is as laudable as it is grisly. From the outset, Grann’s book proves a necessary journalistic exposé – one that was years in the making – about a campaign to marry and then murder Osage Indians on their own reservation. But between the lines, Grann has written something else: a wrenching Western true-crime mystery about a tribe nearly destroyed by white greed.

As its subtitle suggests, Killers unearths the remarkable story of the “Reign of Terror” against the Osage Indians in Oklahoma in the early 20th century. The allotment agreement given to the Osage Indians by the U.S. government in the 1870s included a rare provision that stated the Osage owned the “headrights” to any “oil, gas, coal, or other minerals” beneath the land they owned, rights which could only be inherited, not bought or sold. Soon after, oil was discovered all across Oklahoma and the registered members of the tribe became wealthy beyond imagining. Grann even recounts the outrage found in articles about the Osages’s fortunes, instances where “the press claimed that whereas one out of every eleven Americans owned a car, virtually every Osage had eleven of them.” But over the course of the following years, slowly at first—then in larger numbers—individual Osage began to disappear or fall strangely ill.


Grann’s narrative starts with the “whodunnit” disappearance and murder of one Osage woman, Anna Brown, and grows to encompass the dozens, if not hundreds (since many deaths went unreported) of Osage who were poisoned, shot, bludgeoned, blown up, or otherwise killed in the early 1900s. Grann traces the subsequent investigations by a nascent FBI with considerable intensity, cannily pushing readers to race through the book to find out who killed Anna Brown, Charles Whitehorn, Joe Bates, and so many others. With every page, Grann builds suspense without ever reducing the victims to mere historical subjects. Each person is rendered vivid and captivating throughout, a feat that doubles the horror of the events described.

To add to the urgency of this story, acknowledging that the past is always present, Grann describes his interviews with many of the descendants of the victims of this “Reign of Terror.” These interviews, described in the book’s final section titled “The Reporter,” are perhaps the most fascinating part of the book. “The Reporter,” of course, is Grann, and his attempt to uncover what has happened is a happening in itself, extending the story of Killers into our time rather than pretending it exists apart from us. Switching to the first-person, Grann here also candidly reveals the scope of the work involved in producing historical nonfiction. He evocatively describes the near-mania that can take over when assuming such a project, with “stacks of files” growing into towers in his office as he pores over thousands of FBI documents, archives, wills and testaments, and rarely touched archival photographs.

By detailing the herculean process necessary for unearthing this story, Grann humbly points us toward the real debt he and his work owe to individuals like Kathryn Red Corn, director of the Osage Nation Museum, and Margie Burkhart, murder victim Anna Brown’s great-grandniece. Grann makes it clear that without their insight and willingness to assist his project, Killers could not exist. And in acknowledging their pain and contribution, he underscores the impetus in producing this piece of history: to reckon with the past’s effects on the present. The Reign of Terror on the Osage did not just rob its people of their money – it fragmented families, robbed children of their parents, grandparents of their children, and the tribe of its brothers of sisters. Killers, Grann makes clear, is about, for, and in a significant sense by the Osage, both living and deceased. Grann makes it plain that those losses are still felt today, and although white history has forgotten them, “the Reign of Terror had ravaged–still ravaged–generations.” Killers does not dredge up the past for its own sake, but wisely grapples with its effects on the present.

Because of Grann’s journalistic-historical hybrid approach, we never lose sight of the sight of the here and now: those still suffering today from wrongs no one can make right. While his research could have filled a textbook on Osage-U.S. relations, Grann hones his work instead into a deep, riveting mystery. As a result, Killers of the Flower Moon becomes the most compelling read of the year, shining with a sincerity of purpose and a rare clearness of mind worthy of the lives lost.