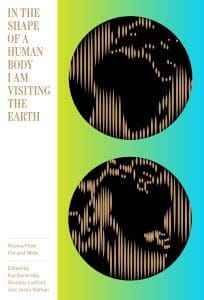 Because I love poetry, I always open a new book with some trepidation. I so much want it to be good, to be transformative, and as I turn to the first page I brace for disappointment. But from its intriguing title to its diminutive footprint In the Shape of a Human Body I Am Visiting the Earth: Poems from Far and Wide (McSweeney’s; 184 pages) sparkles. Honed from the archives of Poetry International by a trio of editors (Ilya Kaminski, Dominic Luxford, and Jesse Nathan), the poems span centuries and countries. Poets range from standbys such as Baudelaire, Celan, Neruda, Rilke, Walcott; to acclaimed living poets—Hirshfeld, Ryan, Zagajewski; to contemporary poets from multiple countries whose names and work you may not know.

So what binds the collection together? The editors have chosen poems that share a sensibility that combines wonder and literate despair. Most of the poems fit on a single page; very few are more than two. The poems share a straightforward diction combined with mysterious content. They tend to often end with a twist. The title poem by Malena Mörling that opens the book is a good example. Here is how it ends:

My arms and legs still work,
I can run if I have to
or sit motionless purposefully
until I am here and I am not here
the way death is present
in things that are alive
like salsa music
and the shrill laughter of the bride
as she leaves the wedding
or the bald child playing jacks
outside the wig shop.

That wonderful series of images left me short of breath, made me think, made me reread the poem from the beginning. I can’t remember when I have read through an anthology with such interest, anticipating the pleasure of each poem, I had to stop again and again to ponder the poem as if staring at the after image of a blaze of light, trying to define its source.


I found many of my old favorites in this small volume—“Tracks” by Tranströmer, “Autumn Day” by Rilke, “The Necklace,” by Mandelstam (though I would have chosen a different translation). Between these poems, I discovered many poets I had never encountered, and whose work I want to explore further, among them Yussef al-Sayigh, Israel Emiot, Gzar Hantoosh, Jaqueline Osherow, Francesc Parcerisas, Asturo Riley, Steve Scafidi, Kary Wayson and so many others.

A bonus here is the appendix of short, descriptive bios. Francis Ponge, for example, “One of France’s most esteemed mid-century poets, Francis Ponge’s prose poetry explores the character of everyday objects—a pebble, a cigarette, a bar of soap, and their capacity for complex appraisal.” I learned that Steve Scafidi, in addition to his literary prizes, works as a cabinetmaker, and that some critics believe that César Vallejo invented surrealism with his publication of Trilce in 1922. Like the poetry selections, many of the bios are unusual and provocative.

In the introduction, the editors state that their aim is to provide “a smattering of both the known and the less-well-known, the contemporary and historical, in a cocktail of topics, tones, and aesthetic orientations, a cocktail we hope may produce surprising new experiences for you, reader.” From my perspective, they have certainly succeeded. I hope this volume, designed to be slipped easily into a purse or a briefcase and picked up at the odd moment, will provide those experiences for you.

These two short poems from the anthology should give you a taste:

96
by Yu Jian (translated by Wang Ping and Ron Padgett)

A cold front is attacking the city
3 p.m. the sky is turning gray
Cold has gripped everything
Someone starts to be afraid of life
Someone loses interest in traveling
but when a beautiful woman appears
even if it’s just a glimpse of her back in the street
the controlling force loses its grip
life wants to live again
the traveler feels like taking off now
the Kunming man who hates cold weather
suddenly lets go of his collar
revealing his neck, pink from the cold

On Giving Birth
by Kathleen Ossip

Meryl Natchez’ most recent book is a bilingual volume of translations from the Russian: Poems From the Stray Dog Café: Akhmatova, Mandelstam and Gumilev. She is on the board of Marin Poetry Center and blogs at www.dactyls-and-drakes.com.