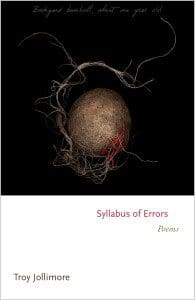 Poet Troy Jollimore hurtled onto bedside tables everywhere when his widely celebrated debut, Tom Thomson in Purgatory, won the National Book Critics Circle Award in 2006. Since then, his tightly wound, exploratory poetry has touched on everything from the the nature of beauty to meeting Charlie Brown in a bar. We are pleased to say Jollimore will  be leading ZYZZYVA’s first ever Poetry Workshop. The deadline to submit your work is September 15th. The poet, who has appeared in ZYZZYVA No. 92, 101, and soon in 111, recently took time out of his busy schedule to talk with us about Writing Workshops, living in the age of On Demand content, and what we mean when we discuss Poetic Craft.

ZYZZYVA: Poetry workshops sometimes don’t come to mind as readily as fiction workshops – what do you think the communal, learning atmosphere of a workshop can bring to poetry, specifically?

Writing poems is hard, and we need all the help we can get. That’s an obvious thing to say, but there’s a great deal of truth in it. Beyond that, I could say that every poem, and every act of writing a poem, implies a community, or perhaps several intersecting communities: the readers for whom the poem is intended, the writers of the poems that preceded it and form the background against which it is written, the community one physically lives in, which sustains the material conditions in which poems can be written.

The writing workshop is a quite special form of temporary, semi-spontaneous community; a place where we come together, as people do in church or at the movies, to give our shared attention to one another’s works and ideas and, in the process, to discover and come to know each other a little more deeply. Sometimes a poem will crack open before your eyes in a workshop; sometimes the blockage that was holding it back will simply disintegrate and fall away. Sometimes someone will say something—a casual, offhand remark, as often as not—that solves your poem’s problem, or makes you realize that your poem really doesn’t have a problem. Sometimes you can even find solutions for problems having nothing to do with poetry at all. And sometimes you just walk away feeling enriched and comforted by having spent time in the company of other people who, like you, share this odd particular interest for an art form that has, against all odds, persisted through the millennia.

Z: What kind of intentions–formal, personal, poetic–do you hope people come into the workshop with?


TJ: To share their passion and enthusiasm with each other. To talk openly about poems and other things they care deeply about. To get to know other people, and themselves, a little better. To open up their work, expose it to the air, and help it grow. To discuss their artistic struggles, to display their imperfect works in an atmosphere in which imperfection is forgiven and even loved for what it is and often turns out to be the first step toward something wonderful. And to make friends. That might sound a little cheesy, but I really mean it. Friendship is vastly important and our present society seems to be becoming more and more inimical to it. Art—whatever particular art form happens to turn you on the most—remains one of the best sites for finding friends, real friends, others of your kind.

Z: In your poem “Vertigo” (featured in ZYZZYVA No.101), the lines “(since now everything is available on / demand, and what cannot be had / on demand does not exist.)” are fairly pointed, and convey the disillusionment a lot of artists express with modern technology. At the same time, books and poems have always innately been a sort of ‘on demand’ entertainment, ready for us to read and put down when we like; how can we reconcile that dissonance?

TJ: That’s a nice observation. I would say, first, that I wouldn’t express, because I don’t feel, a general disillusionment with all contemporary technology. I’m very fond of antibiotics, vaccines, and anesthetics; they have greatly improved the lives of a vast number of people. I’m very fond, too, of electric guitars, and of the technology that makes movies possible. Even the technology that enables the “on demand” culture is in itself quite wonderful, and not inherently problematic; what is problematic is the culture that has grown up around this technology, in which, rather than exploring an ever-wider range of works by an ever-expanding number of increasingly diverse artists, whose works are more and more available to us, so many people seem to be reducing their conception of what is interesting and worth exploring to the items that appear on short, narrowly focused and limited, Officially Approved lists, devised and enforced by the corporations that control and provide the technology in its most familiar forms. (And this is happening as much to books and poems as to any other art form. A large number of my students, it seems, will only read things that are online; print books don’t seem to interest them at all.) 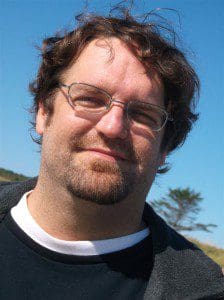 Of course there is also the fact that the “on demand” culture has had a radical impact on our notion of the event – the thing that happens at a particular time, that you have to be present for or else you’ve missed it. Now, as you point out, books and poems aren’t events in that sense either; they don’t happen at a particular time, we decide when and where to read them. (Although a poetry reading is an event – it is important to remember that poetry is not just a written form, it is an oral one as well.) So it has always been the case that there were some art forms that presented themselves as events, and others that did not. My sense, though, is that now there is very little general interest in artistic or cultural events; even going out to a movie—as opposed to watching one at home, at one’s convenience—has fallen out of common practice. And it isn’t just that it is regarded as too much trouble, or people are too busy; it’s that people can’t understand why one would do such a thing; it’s a mystery, to many young people I talk to, why anyone would go to the movie theater, let alone to ”the theater.” Or even to a concert, in many cases. And they seem to feel a lot of anxiety about it, too – the social aspect of it, the idea of being with people they don’t know, as well as the commitment aspect, to have to sit there for a certain length of time and pay attention without being able to pause and take a break, etc. – all of this seem to strike them as unpalatable. Although maybe I’m exaggerating, maybe the people I have talked to don’t form a representative sample. To me, something seems to have gone out of the culture.

Z: “Poetic craft” is a fairly buzzy kind of phrase that gets thrown around a lot but doesn’t explain itself all that easily. In what way would you personally speak of your own poetry as a craft? What are its building blocks, tools, architectures…?

TJ: The advantage of the craft metaphor, I think, is that it helps us resist the popular but misguided view that poetry is all about inspiration and the spontaneous expression of what lies inside the inspired individual; it reminds us that one needs to study poetry, to read a great deal of it, to get to know one’s tradition; one needs to do this in order to know what is possible and what has been done, and to learn how it sounds and develop one’s ear and voice, so that you can tell the real stuff from the second-rate. The disadvantage of the metaphor is that it may lead us to under-estimate the role of inspiration; to call it a ‘craft’ may suggest there are more or less mechanical techniques you can learn, that will allow you to write successful poems whether you are at all inspired or not. And if it were really a craft, the you could make the same poem again and again, the way a carpenter can make essentially the same table again and again; but obviously that isn’t the case.

Moreover, as your question implies, the ‘craft’ metaphor is likely to lead us to think about poetry in terms of materials and construction—which isn’t, to my mind, a productive way of thinking about it at all. Poems don’t feel to me like constructed things. They aren’t meant to be solid, they aren’t meant to hold anything up; often they break apart in the act of reading them, and that’s what they are meant to do. A good poem is more like a magic trick, or a joke; and while we can certainly talk about the formal properties of such things, thinking of them as if they were material objects put together from simpler constituents feels very wrong to me, and unhelpful.

At any rate, I don’t feel that I possess a high enough degree of control over my writing to see it sincerely as a craft. At least, that isn’t the word I would choose to use. Much more of my poetic practice involves one form or another of groping in the dark. 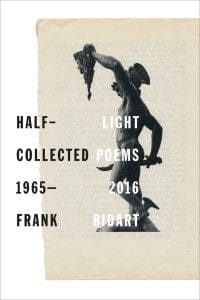 Z: What is your favorite poem or collection of poems you’ve read recently?

I just read Frank Bidart’s Half-light: New and Collected Poems 1965-2016, and I thought it was quite stunning. His music, and his way of articulating a poem, are not like anyone else’s. And the way his poems speak to each other: even poems I had read before seemed new and more intriguing—and, in some cases, more disturbing—in that context, gathered and presented along with the rest of his work. It’s quite masterful; I hope everyone picks up a copy and reads it cover to cover.

Troy Jollimore’s most recent collection of poetry is Syllabus of Errors (Princeton University Press). His previous publications include At Lake Scugog and The Solipsist, and he won a National Book Critics Circle Award for poetry for his debut book, Tom Thomson in Purgatory. He is a philosophy professor at California State University, Chico. His poetry and criticism can be found in ZYZZYVA No. 92 and 101, and is forthcoming in No. 111. Submit your work to ZYZZYVA’s Poetry Workshop with Troy Jollimore here.