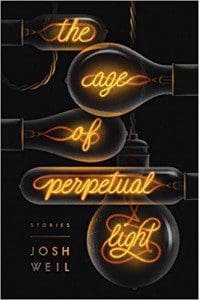 Josh Weil’s first collection of stories, The Age of Perpetual Light (272 pages; Grove Press), spans the course of history to examine the miseries and ambitions of humanity, tracing the mysteries of light and darkness that have long confounded and mesmerized us. Beginning with the tale of a Jewish Russian soldier, who deserts to America where he peddles Edison Lamps and falls broodingly in love with an Amish woman, Weil’s themes reveal themselves. We see the invention of electricity and man’s emerging dominance over light as a magnificent, almost magical trick. But at the same time, as the collection’s stories about the excesses of ambition show, that desire to dominate the dark ultimately raises the question of at what point does our appetite for knowledge and control begin to control us? What happens when the metamorphic light becomes too bright to turn down – when we begin to miss the darkness but have no way of bringing it back?

The eight stories in Weil’s collection—narratives ranging from the struggles of parenting an autistic child to a woman’s tenacious passion for flight, as well as the strife that follows a pair of Serbian immigrants (a young boy and his abusive mother)—were written over the course of a decade. The intonations in each story, by consequence, vary drastically—from lyrical? to almost dystopian. But they all share revelations into the heartbreak and inspiring moments that shape the human spirit.


The collection closes by returning us to the story of the lonely Edison Light peddler. We revisit him at an earlier time in his life, when he is about to embark for America and flee the police who have discovered his desertion. Writing a letter home, Shimel—who has adopted a false identity to protect himself from anti-Semitism—describes his fear of losing himself and those he loves, and his conviction to carry on regardless:

“And here he comes again: the lamplighter, crossing from one side of the street to the other, unlatching the panes, reaching up, snuffing the flames. Watching him it seems as if he might have just kept walking. Followed the night around the globe, lighting lanterns until the dark crossed into day and, coming upon the flames already lit, he flipped his pole to its snuffing end, simply kept on. Maybe, some night in another city in another country I will see him coming down another street. I will call him over. I will ask him to bring a message back to you. ‘Tell them,’ I will say, ‘hello from here.’”

Weil beautifully illustrates the conviction that as we all bear witness to the continual rising and extinguishing of its power, the “light,” and our moth-like attraction to it, can keep us bound both to its elemental force and to each other.