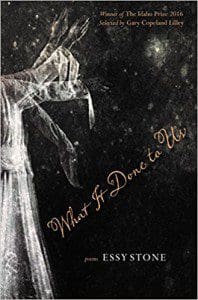 In her first collection of poetry, What It Done to Us (66 pages; Lost Horse Press), Essy Stone writes about an early life spent immersed in a Southern culture she deems toxic, where oppression and tradition are rooted in the collective mentality, often at the expense of women and minorities. She describes a landscape that is as suffocating as it is unsettling, where mountains have “heavy hands” and the valleys lie “cursed by generations of sunburned famers.” Her poems address the unstated yet generally understood rule that if you are born in the South you are somehow fated to stay there, to follow in the footsteps of the generations that came before. Although much of her work focuses on how she fought against this expectation, she does not shy away from speaking frankly about her painful past, or the physical and emotional toll it takes to depart from the world one was raised in.

What It Done to Us reads as a memoir in verse, ordered chronologically from her troubled childhood and teenage years to her adulthood. From her earliest days, we sense she already possessed the rebellious spirit that would serve her well when she made the harrowing but necessary decision to leave the constraints of her hometown. She describes herself as a “teenage delinquent with eyes like black heaps/of coal that no great prophet could lift from their depths,” here also touching on her various confrontations with the “Devil,” a reappearing presence throughout the collection that alternates between being an external force she is helpless against and an undeniable part of herself.


What stands out in the book is the camaraderie between Stone and the other women who reside in her town; she observes their navigation of Southern life with both skepticism and sympathy. These women steel themselves against their various struggles and tragedies, acting tough rather then demure as they “growl through lipsticked teeth at the unseen hand that holds us here./Raise our chins to meet its invisible fist.” While Stone doesn’t minimize their strength of character, she criticizes the way they appear to have surrendered to the unfairness of their situation. Despite its occasionally defeatist language, there is still an undercurrent of resistance running throughout What It Done to Us, with lines such as “We never relax, our muscles ready, tensed/against this dense pressure waiting to erupt from within” and “you spend evenings/at the dam, praying for it to break. Something must burst,/must loose, must free itself & carry you.” The tension between Stone’s desire to follow her path and the pressure to abandon it nears its breaking point as she grows closer to realizing her escape.

What It Done to Us is a sharp and honest reflection of the East Tennessee town she was raised in, of her wounds manifested in the ongoing inner-conflict between guilt and religion, family and self-preservation, and of the pain of one’s memories and the desire to be rid of them. Stone eventually leads us to understand how an environment so shocking, so disturbing can maintain such a powerful hold on those who call it home.