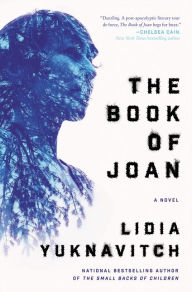 Through several books of fiction, Lidia Yuknavitch has developed a reputation for playing with language and confronting what a novel can be, both in form and purpose. In her work, plot steps aside for meditations on brutality, passion, lust, agony, and hope, all of which she ruminates on until, as if by magic, they approximate something like an undeniable narrative. Using characters and singular events to flesh out her more abstract points, she has the ability to dig into the more painful and at times disturbing aspects of feelings, resulting in rewarding books.

In her new novel, The Book of Joan (288 pages; Harper), Yuknavitch tries her hand at crafting a Heinlein-esque epic with a feminist twist, a political fable in which the protagonist Joan of Dirt—an unabashed stand-in for Joan of Arc—does her best to take down the misogynistic dictator Jean de Men. de Men has all but depleted Earth’s resources and created CIEL, a space station (and what he believes to be a utopia) for the wealthy who supported and aided his horrific rise to power. While it might seem unclear what his ultimate goal is (or what drove him to it), what is clear is that his designs threaten art and nature.


Contained within the larger story of Joan versus Jean is the battle between the story’s second protagonist, Christine Pizan, and the concepts underlying de Men’s tyranny. While Joan traverses a post-apocalyptic Earth, waging a two-woman war with the odd scavenger group or cohort of de Men mercenaries, Christine lives unhappily on CIEL. Living in the space station has slowly transformed men and women into unsexed creatures, forcing them to re-direct their longings into poems they scar onto their flesh. Christine, an expert skin artist, hails Joan of Dirt as a hero, and devises a plan to destroy de Men, who has sentenced to death her true love, a genius named Trinculo Forsythe.

Joan’s story adheres closely to the lone survivor/cowboy savior trope, as she and her beloved partner, Leon, stalk the barren landscape in search of resources, often encountering danger they almost always manage to escape. Joan and company can weaponize the natural world to varying degrees. By tapping into the divine, which is rooted in nature, Joan can survive near-death incidents, protect Leon, or resurrect her fallen brother. There are no potions, spells, or mutations; she simply finds profound strength in her connection to the splendor of Earth, hearing the humming of energy in her head, much like her namesake heard the voice of God.

Through poetic and sometimes stunning passages, Yuknavitch allows us to understand the pain driving and hindering Joan. She wrings pathos and truth out of such things as her few memories of growing up with her brother and playing in the forest. Here Yuknavitch describes Joan observing Leon:

“They’ve grown so close to the land and what is left of it, so accustomed to subterranean life, that she sometimes wonders if they are evolving into a new species, like the thousands they come across underground all over the world. But the shape of Leon’s ass, the slimness of her waist, her breasts and biceps and shoulders and hands as strong as starfish, still say woman in ways Joan refuses to feel all the way through.”

Elsewhere she has Christine describe de Men as a “rage-mouthed Empire Leader,” and her desire for love as “a wish to fuck the sun.”

But while Yuknavitch does a tremendous job of rendering Joan’s internal life and employing acrobatic language, other aspects of the book aren’t as satisfying. Christine’s story, for example, isn’t nearly as compelling as Joan’s, and the ultimate confrontation with de Men reads more like a raised fist of solidarity than an epic battle, though there’s a certain kind of wonky joy to be had in reading of Christine’s cackling enjoyment of de Men’s downfall.

Those are just quibbles. The Book of Joan ultimately succeeds not just because of its prose, but because it asks us a big question well worth exploring: what is the significance of our bodies in shaping our conception of what it means to be human? Joan, as an individual, represents revolution, and as such largely denies her partner the pleasures of love as she focuses on her task. At the extreme end of that is de Men, who believes that to take away the ability to satisfy bodily desire is to take away what is essential to being human. Each represents a different facet to the question, and Yuknavitch leaves it up to the reader to find the answer.