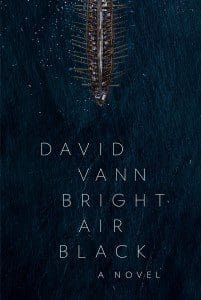 With all of the revenge, patricide, and doomed attempts at heroism as one might expect from Greek mythology, David Vann retells the story of Jason and the Argonauts through the eyes of Medea in his new novel, Bright Air Black (250 pages; Black Cat/Grove). Medea is most commonly known for her fierce, self-sacrificial love for Jason, which borders on madness as she is driven to betray her family and abandon her home country to help him rise to power. In this retelling, Vann introduces us to a Medea that goes beyond just her supporting function within another hero’s journey, and who has her own dreams of conquest in mind as she sets sail on the Argo.

The novel begins moments after Medea decides to leave Colchis, her home, with Jason, and steps onto the Argo, where the most of the first half of the book is set. We see her as she is feeds the dismembered corpse of the brother she slaughtered into the sea, for her father, the king of Colchis, to trail after and collect. Although this opening may seem exceptionally horrifying, the reader soon learns Medea is rarely without blood on her hands. Early in her journey, it is revealed her motives for these incredible actions have nothing to do with her love for Jason, and everything to do with a hunger for power. It is not just Jason using Medea here, but Medea using Jason so as to get closer to ruling her own kingdom one day. As she sails on the Argo, she ponders the nature of god (with philosophical questions such as “How can we know when we’re worshipping a god and when we’re worshipping the sign of god?”), how stories of heroism get shaped by biases that obscure their darker, more realistic elements (about Jason: “The stories will reveal nothing about the real man who lived”), and how no one—despite status or title—is invincible.


After the Argo arrives at Ioclus and Jason delivers the Golden Fleece meant to secure his place on the throne, it quickly becomes apparent the king there had no intention of following through with his promise. Rather, Medea, Jason, and her two children are forced into slavery, leading us into the second part of the book, in which unfurls a series of increasingly doomed attempts by Medea—despite all obstacles and the creeping knowledge she is spiraling toward her downfall—to gain the control and freedom she had long dreamed about on the Argo.

As disturbing as her actions may be, it would be reductive to characterize Medea as simply power-mad or heartless. More than power, she wants the kind of freedom it is nearly impossible for women in her society to obtain, no matter their lineage or capabilities. Further, she wants to prove she is a force not to be underestimated. These desires alone set her up to become an outcast, something she even predicts as she reflects on how her story will be told to future generations: “It will be a different kind of story, a tale of a monster, a story of what is not human. Every king has bathed in blood, but that is told differently.”

In Bright Air Black, Vann captures all of the fascinating dark and magical elements of classic Greek mythology that have made it endure across time and cultures, but challenges us to empathize with Medea, to see her humanity despite the actions that will label her as a monster.