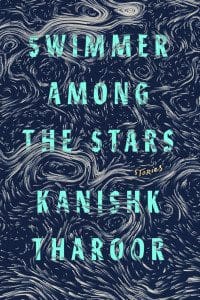 Swimmer Among the Stars, (256 pages; Farrar, Straus, and Giroux), Kanishk Tharoor’s first collection of stories, centers on concepts of language, conquest, and our ever-changing position on this planet. Born in Singapore and raised in Geneva, Tharoor touches on the imagined personalities of several countries and cultures— ruminating on the complex ways in which strangers cooperate and learn from one another, even on the brink of warfare. Often focusing on the strong polarities, and in turn, similarities of differing cultures, Tharoor is meticulous in illustrating the realistic yet otherworldly on both a microcosmic and macrocosmic level.

Setting his thirteen stories in land, space, and sea, and roaming in time from as early as 190 B.C. to a post-apocalyptic future, Tharoor asks us to conceptualize the relationship between past and present by treating time and language as near characters of their own. Reminiscent of the magical realism of Salman Rushdie or Haruki Murakami, Swimmer Among the Stars collectively capitalizes on the often unexplainable, enchanting feelings and interactions brought on by strong cultural identities and superb storytelling.


In “Elephant at Sea,” a secretary of the Indian embassy deals with an elephant, inexplicably en route to Morocco. Journeying beside this ginormous animal on both land and sea, we quickly acquaint ourselves with its peculiar, human-like personality. Swept away in joyous detail and emotion, Tharoor writes, “On deck, the elephant stormed from side to side, relishing the heave of the ship, the rise and prostration of the bow as it carved its mass through the blue. The mahout studied the joy of the elephant with awe. He thought the elephant would grow bored of the sea, but the wonder never wore off. As the wind sprayed it with foam, the creature seemed to admire the uninterrupted ocean in a kind of rapture, a dervish-like ecstasy. It once occurred to the mahout that this was the closest he had ever got to witnessing contact with the divine: the elephant forgetting its elephantness in the vista of the sea, the veils of moksha parted, the creature poking its trunk into the beyond and feeling its way toward cosmic oneness.”

In “A United Nations in Space,” we’re cast beyond Earth’s atmosphere, circumnavigating the devastated planet from the MaidenX Orbital Hotel. The complexities of human coping is examined as foreign service officers from different countries respond to the loss of their previous home and purpose in life in varying ways. “It makes you wonder what the point is,” says one. “Atrocity for the sake of atrocity, that kind of logic is always inscrutable. No, I mean, what the point is of grief. Of grief? If everybody is grieving, then grief loses its distinction, it just becomes a shared, permanent state. I suppose. So why do it? Because grieving is helpless, because how else do you respond to loss?”

“The Loss of Muzaffar,” set in contemporary New York City, examines the life of a mysterious man found and taken in by the rich Celestini household. Unable to ever break through the language barrier, Muzaffar remains an elusive figure within the home, cooking brilliant dishes for the family, while repeating the phrase “aadaab arz” (an Arabic greeting) in response to any English. “If asked about the land of his birth, or his age, Muzaffar would laugh and later emerge at dinner with a grilled swordfish and declare, ‘This is where I’m from!’ or, after placing a goat cheese tart on the table, clap once: ‘That, my dears, is the sum of my years.’ Likewise, he explained his ethnicity with a chestnut soup, while his childhood was one of eggplants and quails. His family consisted of twenty-four cupcakes; he elaborated his political beliefs in dumplings; and the path that had finally brought him to the Celestini’s stoop appeared in the burnt trails of roasted tomatoes.”

In sumptuous, thought-provoking detail, the subtleties of human emotion and interaction are carefully explored. Translating food into words, dishes into phrases, Tharoor has the ability to shine the perfect amount of light on the most magical and sensitive of moments, and is unafraid of taking his time to do so. Swimmer Among the Stars dazzles.