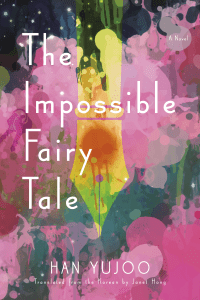 The dichotomies of childhood—children’s capacity for both guileless love and extreme cruelty—make our earliest years ripe material for storytelling; fairy tales, in particular, have long traded on the contradictions of youth: Hansel and Gretel narrowly escaping an evil witch’s clutches only to burn her alive in her own oven, Red Riding Hood fending off the appetite of a ravenous wolf disguised as her grandmother before filling his stomach with stones. It’s through this lens the reader approaches The Impossible Fairy Tale (214 pages; Graywolf Press; translated by Janet Hong), the first novel from Korean author Han Yujoo and her first work to be translated into English.

The book opens on a bleak grade-school world (“Do you know you can kill someone with a fountain pen?” is one of the first lines spoken) and quickly establishes the novel’s central parallel: the charmed life of the angelic Mia—who wants for nothing and receives lavish gifts from both her biological father and her mother’s paramour (as the novel opens it’s a set of seventy-two German watercolor pencils, perhaps a nod to the Germanic origins of the Grimm fairy tales)—presented in sharp relief against a classmate’s known only as the Child, an unfortunate girl who experiences a constant torrent of abuse from her mother: “She wishes she could be erased. But every time she tries to erase herself, she only grows darker.”

The Child’s nightmarish existence is also situated among traditional Korean folk tales, such as the superstition that one should not clip their nails at night lest the shavings be eaten by mice, who will then steal one’s form: “She sometimes wishes that mice or ants would eat her nail clippings, just like in the old stories, and transform into her image…and become her and share her pain receptors.” Mia and the Child become destined for confrontation when the Child, motivated seemingly only by inconsolable rage, sneaks into the school at night and adds morose messages into her classmates’ student diaries: “I despise you,” “I hate you,” “I want to kill, too.” As the days pass and the teacher searches for a culprit, no one possibly suspects the Child precisely because she is given so little thought (“No, the teacher doesn’t think about the Child at all”). Tensions mount as it becomes increasingly clear the Child’s story can only end in tragedy.


Knowing how invested we must be in the fate of the Child, Han Yujoo continually throws the reader off guard by drawing attention to the artifice of fiction writing itself; in the midst of the Child and Mia’s schoolyard interactions, lines such as “Without conflict, there is no story” and “We must continue with Mia’s story. Look at Mia” remind us that, no matter how vivid these characters’ pain may seem, they are merely the products of an omniscient author carefully arranging each page. Yujoo’s attempt to unnerve, to prevent us from ever feeling as though we’re on solid ground, reaches its apex when, in the middle of the novel, the narrative pauses so Yujoo can share several pages of anti-fairy tales—dismal vignettes of disappointment in the lives of characters never to be seen again, single paragraph chronicles of car crashes, stage collapses, schoolyard brawls, and child abuse.

The Impossible Fairy Tale excels when Yujoo provides every drab detail of this dreary world, one in which students play “the fainting game”—mock attempts to choke each other out—as soon as their teacher leaves the room, and “As always the potted plants on the windowsill complain of hunger and thirst.” When Mia goes over to a friend’s house after school to watch a Japanese anime on television, the show’s fantastical science-fiction imagery becomes a metaphor for the children’s anguish: “A planet is being destroyed. It collapses. Everything is collapsing…The citizens of the planet that is being destroyed say over and over again, as though they’re singing a round, that everything is collapsing.” The word “collapsing” soon functions as a motif in the novel long after Mia and her friend have turned off the television.

A surprise reversal during the book’s final third brings the meta aspects to the fore in a manner not unlike Italo Calvino’s work, and may frustrate those who’ve become invested in the Child’s fate. To be fair, the author herself appears to count herself among that number: much of the climax of The Impossible Fairy Tale serves as an exploration of a writer’s moral responsibilities to her long-suffering creations, particularly when that suffering involves a grave social issue like child abuse. “A kind of guilt dogged me,” the narrator—who may or may not be Han Yujoo —admits as she orchestrates the life and death of these “luckless” grade school students.

It may seem cruel for a writer to engender a reader to a character as tortured and alone as a Child, only to glaringly spotlight her fictitious nature—but such is the nature of dreams. With The Impossible Fairy Tale, Han Yujoo has crafted a novel where the deepest recesses of the subconscious are conflated with childhood memories, futuristic anime, and folk tales to express the particular unreality of a writer’s life. The result is a fine book, and one sure to be enjoyed by those who don’t require a bread-crumb trail leading to a tidy plot resolution.