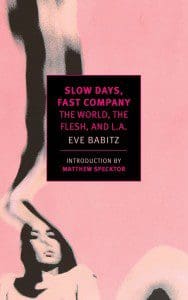 “I am quick to categorize and find it saves mountains of time,” writes Eve Babitz in her superb autobiographical novel Slow Days, Fast Company: The World, The Flesh, And L.A. (184 pages; NYRB). Matthew Spector is right when he writes in the introduction to the New York Review Books Classics’ reprint that what sets Babitz’s 1977 novel apart is “the strength and radical compression of its thought.” Although Babitz paints with a broad brush, the resulting images ring approximately true. (And what is there but approximate truth?) Many of her generalizations concern women and men. From the tragedy of Janis Joplin’s death, Babitz reasons that “women are prepared to suffer for love; it’s written into their birth certificates. Women are not prepared to have ‘everything,’ not success-type ‘everything.’ I mean, not when the ‘everything’ isn’t about living happily ever after with the prince (where even if it falls through and the prince runs away with the baby-sitter, there’s at least a precedent.)” At least once, Babitz claims to be giving up on her own “happily ever after,” but she’s the kind of person who can’t help falling in breathless, cinematic love.

The preface opens with this strange warning: “This is a love story and I apologize; it was inadvertent.” She’s referring to the story of her love of Los Angeles, which, like the city itself, is sprawling and seemingly chaotic: “You can’t write a story about L.A. that doesn’t turn around in the middle and gets lost.” Of course, to love a place means to love the places it comprises. The first time she goes to a restaurant called Ports, she thinks, “I have got to get into this movie.” So she starts waitressing there for free. Of Forest Lawn Memorial Park, she writes: “Forest Lawn is an example of eternity carried to its logical conclusion. I love L.A. because it does things like that.” Even when she leaves L.A., she can’t go long without thinking about it. In Bakersfield, she notices the rows of grapes are “manicured like Beverly Hills.”


For people, she falls almost as hard. In the second half of the book she is madly in love with an “elegantly handsome” and “not that gay” man. When they visit Palm Springs, the author watches Shawn and wants him to kiss her: “when I asked him, he kissed my foot. I wished I were dead.” It’s delightfully overdramatic. (Though she is a serial complainer, Babitz knows most of her problems are trivial. That day in Palm Springs is the worst of her life—“in a frivolous kind of way, of course.”) The couple is in Palm Springs with Babitz’s new friend, Nikki, a rich woman with a permanent migraine. Like Babitz, she is “a slave to color and thought about it over and over.” When the author suggests Nikki decorate an interior gold and purple, Nikki “cried, swept away in peals of joy, the laughter of a small boy helpless in the face of the ridiculous. She even dropped the phone. I was hers forever.” Between the chapters, the book is riddled with “Easter Egg italics” addressed to a lover, “since it’s impossible to get this one I’m in love with to read anything unless it’s about or to him,” Babitz explains. Still, her focus on the lover is secondary to the star of the show, her city: “The seduction of a non-reader is how I plan to tie up L.A.”

At times, the author may not seem to be taking herself (or anything) seriously, which makes many of her thoughts all the more arresting. A couple pages after telling us “all we ever think about, really, me and my friends, is wine,” she makes a clever observation about gender roles: “he treated me with a chivalrous masculine know-how that I sopped up like a person who’d never heard of how chivalry was just another nefarious masculine scheme to keep women in their place.” Babitz does this kind of thing all the time. Wearing her learnedness lightly, she alludes to a Greek myth after having just gushed about her favorite rouge. She reminds us that intellect and glamor can coexist. Actually, they go together like fresh fish and white wine.

Like all great literature, this book begs to be reread—not to mention read aloud. Babitz’s prose glitters like grains of quartz in weathered pavement. That’s not to say the whole doesn’t equal the individual sentences. Each chapter is sinuously structured. One might think she would be more widely known, especially since her writing is so epigrammatic and quotable. She is certainly a sunset you don’t want to miss.