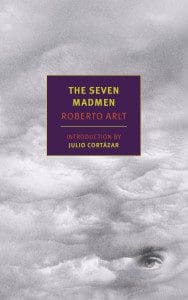 Roberto Arlt’s The Seven Madmen (New York Review Books, 272 pages; translated by Nick Caistor) is a thriller, a crime drama, a dystopian revolution novel, a metafictional meditation, a tragic romance, and a revenge tale all in one. Julio Cortazar, who provides the introduction in the New York Review Books edition, is correct in saying Arlt’s novel throws off any “literariness”—its schizophrenic characters and arrangement are too emotionally raw, too erratic in theme and direction for it to be a “traditional” novel, especially for when it was written in 1929. (Some of the novel’s formal choices, such as the use of footnotes, and the way its plotting creates a broken narrative wouldn’t be “literary” for decades.)

The story is composed of “The Confessions” of Remo Erdosain, a poverty-stricken, manic-depressive, and hopelessly self-reflective Argentinian. Arlt fronts as if his fiction is real, trying to convince us that he actually met this miserable man and interviewed him over ten days (so say the footnotes). Forged at a young age in humiliation from his father and in pain from destitution, Erdosain constructs an intricate escapism. His intense imagination and its resulting multitude of made-up scenes, stories, and fantasies plunge us deep into the mind of an anguished man.

And “anguish” is the word for it. Erdosain believes he and all his fellow unfortunates live in “The Anguish Zone,” an inescapable layer of existence that curbs their thoughts and actions into unavoidable feedback loops of habit and delusion, keeping them miserable. They live in fantasy instead of reality. Erdosain sees his life almost like a stage drama, one which reality continually crashes, spoiling his idealism.


While Arlt was always looked down upon by his contemporaries, according to Cortazar, for a lack of formal adherence, his novels nonetheless contain “irremediable and irrevocable images” that force us to return again and again to the weight of our shared reality. The pairing of those images with Arlt’s personal knowledge of what an impoverished upbringing is like drives the book’s logic—namely, people faced with a life of poverty need escape to cope.

Some of The Seven Madmen of the title—the Astrologer, the Melancholy Thug, the Falsely Pious Pharmacist—appear to represent the ways people are shaped by indigence, even when they have the means to leave behind crime and poverty or have in fact left it. The grip of poverty is tightened when it’s experienced in youth, Arlt seems to suggest; when people are raised in it, no matter what their circumstances are later, they will always be reacting to it.

So the Thug, who has the money to stop pimping, still feels compelled to pimp. And Erdosain remains proud of his efforts to create the perfect fantasy to stave off his living hell. The beauty, simplicity, and efficiency of his invented world are the only things that make him happy.

Still, Erdosain questions his own judgment, as well as the pimp’s, saying their fantasies of control are hollow. What sets Erdosain apart from the rest is his curiosity for the low passions that spur him. His awareness of the anguish zone—classifying it, grappling with it—seems to do nothing to abate these desires. Even Erdosain’s most elaborate fantasy of wealth doesn’t help.

This is where the revolutionary dystopian aspect of the novel comes in. Arlt disagrees with the system of society more than anything else, and seems to live his rebellion through the Astrologer’s vague plot to take over the government of Argentina.

Arlt also delves into metafiction. At one point he has Erdosain imagine himself as a character exemplifying the idea that crime validates the existence of the poor who are without power or faith, leaving Erdosain perplexed that he could be such a character; he always seems to be one step away from realizing he’s in the novel. Elsewhere, the characters speak of novels as indicators for what life’s supposed to be like, as if they’re the only measurement for how “real” something is.

These metafictional elements seem to want to force the reader to consider how much of this book could be drawn from lived experience. While many of the characters seem obviously fictional, many of Erdosain’s thoughts, and the conversations and arguments he has with his wife, come off alarmingly real. Perhaps creating Erdosain was Arlt’s way of coping with his upbringing, similar to how Erdosain must imagine himself out of his own life.

Despite all the bleakness, The Seven Madmen is an addicting read. Roberto Arlt reads like Nathanael West; Erdosain is like a Miss Lonely-hearts who has no outlet for his grief and an even more overwhelming psychosis. The depressing moments of poverty are so rampant and exaggerated that they resemble Tarantino’s use of blood and gore—it’s not that off-putting once it’s clear that subtlety is being expressed within that given spectrum. Arlt delivers what it feels like to live in this state 100 percent of the time, how that begets fantastical imaginings that collapse into further loops of escapism. The book, while sad, doesn’t elicit much sadness—only curiosity as to where this will all lead. (At first, the importance of moments and characters and scenes are often impossible to discern.) This is a terrifically, and terrifyingly real book.

One thought on “When the Only Escape Is Through Fantasy: ‘The Seven Madmen’ by Roberto Arlt”