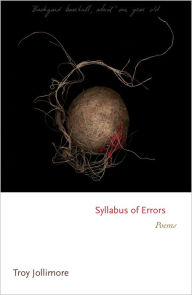 Whenever I open a new book of poems, I am torn by twin currents of hope and dread; hope that there may be something fresh, meaningful, transcendental inside, and dread that it will be more pretentious nouveau pointlessness. Is that too strong a characterization? Not if poetry is the cornerstone of your (with a nod to Forrest Gander) faithful existence.

As C.K. Williams said in “Whacked,” good poems should whack you and “bad poems can hurt you…you know you are, wasting time, if you’re not being whacked.” So it was with deep pleasure that I slowly read through Troy Jollimore’s new book, Syllabus of Errors (112 pages; Princeton University Press). I was thoroughly whacked by these poems, and as Jollimore studied with Williams in the hazy past, I think he’d be proud. From the first lyric, “On Birdsong,” one is captivated by Jollimore’s unapologetic embrace of complex thought, of humor, doubt and praise. Often, the poems move from logic through the fantastic to the affirmative. The poem “On the Origin of Things” starts:

Everyone knows that the moon started out
as a renegade fragment of the sun, a solar
flare that fled that hellish furnace
and congealed into a flat frozen pond suspended
between the planets. But did you know
that anger began as music, played
too often and too loudly by drunken musicians
at weddings and garden parties? Or that turtles
evolved from knuckles, ice from tears, and darkness
from misunderstanding?

After a few more elegant twirls, the poem becomes a love song:

…and that my longing
for you has never taken me far
from that original desire, to inscribe
a comet’s orbit around the walls
of our city, to gently stroke the surface of the stars.

Many poetic and philosophic references infuse these poems. Jollimore’s first book, Tom Thomson in Purgatory, which won the 2006 National Book Critics Circle Award, was at least in part an homage to John Berryman. The series of forty-two linked sonnets shows us a sad, slightly comic everyman, an update to Berryman’s Henry. In his second book, At Lake Scugog (an unfortunate title for an excellent book), Jollimore’s Tom romped though part of the book, but Jollimore also played with other forms—pantuom, terza rima, and rhyme, in general.

In both of those books a semi-comic, thoughtful, and abraded persona emerged, one that matures in the new book. Tom Thompson has vanished, and in his place we are guided by a brave, questing, wry, often baffled poet who absorbs the slings and arrows of an outrageous multiverse and does his best to make sense of them. While the poems play with rhyme and form, experiment with line length and syntax, it is the poet’s vision that stands out, not his formal mastery. This, of course, is the real trick. (It’s gratifying that the New York Times selected Syllabus of Errors as one of the best poetry books of 2015.)

Jollimore’s grounding in philosophy, a subject he teaches at California State University at Chico, often informs the poems. Several poems unfold as a series of questions or propositions, an examination of the world as it is, of how it could be, back to how it is. As “On Beauty”:


Beauty some have ventured is proportional:
the right relative ratio of the actual

against the actual. Others hypothesize
that beauty’s roots lie buried in the sexual,

insisting that aesthetics are relational:
the eye of the beholder is the noumenal

These musings, the intricate, chiming play of a perceptive, questioning mind, often end with affirmation all the stronger for its flawed complexity, as the above poem, which ends with “As if beauty/itself were but a syllabus of errors.”

This conceit, which gives the title of the next poem and the book itself, is that the beauty of the world can be found not by ignoring its manifold, manifest flaws, but by acknowledging and accepting them, a robust theme for any poet of this century, with so much streaming by us everyday—so much unfixable suffering and so much simple delight enmeshed within it.

Many poems express an insatiable longing, a sadness that blossoms on the page like petals on a thorny branch. Logic refuses to exclude the complexity; sensibility refuses to refute it, as in the title poem:

…As it comes to the arrow
in midair that it does not love the target at all,
so the seeds of delayed understanding
will come to you, drifting softly from some
high branch or low cloud to lodge in your hair,
on a Tuesday morning perhaps. Whence come tears…

In these gentle arguments, there is a pervasive nostalgia for an envisioned future that will not be; hopes will not be realized, ambitions remain unfulfilled. You know what you need to do, but can’t. Still the world is lovable, is cherished.

And what I know is this: early this morning
in the branches of my neighbor’s oleander,
I saw a spot of flame, a spark-red
northern cardinal, out of place
and out of season. Surely, my love,
that has to count for something.

As one might posit from his earlier books, wry wit is one of the delights of Jollimore’s musings, as in “Possession,” which starts:

Is there anything anywhere in this world
that is free from possession, that is not owned
by anyone? If there is, I want it.

…No more
lonesome nights on the couch of the cute girl who
will never think of you as anything but
“that sad guy who sleeps on my couch sometimes.”
…No more driving everyone
nuts insisting that the less frequently
listened-to B-side is where the genius really lies.

Several poems seem almost like shaggy dog stories, “Charlie Brown,” “Some Men,” “Ars Poetica,” “The Task,” and “The Fourteen-hour Orgasm” among them.

Of course, there are poems in the book that go astray, relying too much on the abstract: statement, question, statement. And the imagery that drives the sadness of the unattainable occasionally seems tired itself.

But it’s hard to resist the brave, lyric simplicity of a poem like “The Small Rain,” with its nod to Westron Wynde. Here it is in its entirety:

I have decided that today’s small rain—
the drowsy frizzle in the frowsy trees,
which should begin, if I’m not wrong, at five past three—
will be dedicated to you

and just stand there

thinking of me as you do

That alone is worth the price of the book.

Meryl Natchez’ most recent book is a bilingual volume of translations from the Russian, Poems from the Stray Dog Café: Akhmatova, Mandelstam, and Gumilev. She is co-translator of Tadeusz Borowski: Selected Poems, and contributor to Against Forgetting: Twentieth-Century Poetry of Witness. Her book of poems, Jade Suit, appeared in 2001. Her poems and translations have appeared in various literary magazines and anthologies, including The Pinch Literary Review, Atlanta Review, Lyric, The Moth, Comstock Review, and many others.