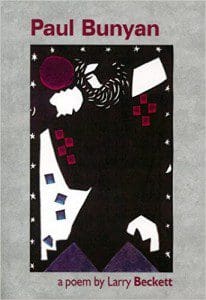 Poet and songwriter Larry Beckett has been embarked on a quixotic project, retelling the legend of the famed, semi-fictional logger Paul Bunyan (not to mention his “blue-eyed ox,’’ Babe) in ways that capture the barbaric yawp of olden times in a voice that speaks to our current culture, and implicitly, paralysis of spirit.

Bypassing empty debates about the pros and cons of “American exceptionalism,” Beckett flat out launches into the introduction of this hero of a thousand faces:

Out of the wild North woods, in the thick of the timber
And through the twirling of the winter of the blue snow,
Within an inch of sunup, with the dream shift ending,
A man mountain, all hustle, all muscle and bull bones,
An easy winner, full of swagger, a walking earthquake,
A skyscraper, looking over the tallest American tree,
A smart apple, a wonder inventor, the sun’s historian,
A cock-a-doodle hero, a hobo, loud, shrewd, brawling,
Rowdy, brash as the earth, stomping, big-hearted, raw,
Paul Bunyan lumbered and belly-laughed at the stars.

Admirers of, say, John Ashbery, may stop here, but the rest of us can stick around for the ride of Beckett’s Paul Bunyan (96 pages; Smokestack Press), a roiling picaresque, described by the publisher as a “modern epic in ‘longwinded’ blank verse.”


As he describes the rowdy crew of “wrestlers, wreckers, boozers, barnstormers, roustabouts’’ and other life-loving no-goodniks, Beckett’s enthusiasm for the Western wildness is contagious. (It is amplified by a CD accompanying the book, in which he reads the poem, accompanied by the laughter of his audience).

No early times Ted Nugent, Bunyan lays down “logger’s rules’’ to his prospective teammates: “always talk straight; be bald-faced, stick to it/Like it was old whiskey; I hear of a man dealing/In a double-faced lie, I’ll hang up his ax myself.’’ His code of conduct also applies to gender politics: “if you drag yourself to the city come spring/I want you to be all slow fingers and sweet talk/With the fillies. I imagine your idea is belly bumping/Which is wonderful, but I catch you beating on a woman, /Look out: whatever you give her I’m going to give you.’’

Beckett’s poem is a kind of a Basement Tapes of American folklore, with wild accounts of Big Swede, Johnny the Inkslinger (he relieves Bunyan of his dreaded book-keeping duties), natural disasters and man’s confrontations with unconquerable Nature.

Bunyan’s grief at the (seeming) fatal illness of his faithful companion, Babe, leaps off the page:

It’s no good, boys. Babe’s dying. He’s tough, but so what?
White pines in the steady sun, brook trout in blue water
Owls sliding out on the weather, bulls steaming in the mud,
You mopping the kitchen, your honey going for the mail, are
All equal, all dripping with risk, like icicles in April.
It’s skinny consolation for a funeral.

Beckett, the author of Songs and Sonnets (Rainy Day Women Press) and Beat Poetry (Beatdom Books), is probably best known for his role as co-lyricist on timeless tunes by the late Tim Buckley, including the oft-covered “Song of A Siren.’’ (For an updated rendition of the tune, including Beckett’s reflections on his collaboration with the troubled singer, check out this performance, in which he is accompanied by his current musical partners, The Long Lost Band.)

For the most part, though, the Portland poet seems content to quietly pursue his muse, whether or not it happens to be translated into chords of fame. In addition to the Bunyan epic, he has reportedly been long at work on an “American Cycle,’’ which deals with the mythic legacies of Chief Joseph, Wyatt Earp, P.T. Barnum, Amelia Earhart and the kicks of Route 66.

But let’s leave Beckett’s bumptious, but affectingly lovable, superhero with the last word about the democratic vistas of these troubled, but somehow surviving, states of mind and geography:

I can name the years for history by the insane weather
And the scrapes with animals and greenhorns, oh my land,
We’ve charged all over the American map like a railroad,
From the skid roads to the boom towns, and in nice circles,
And the air was always full of brags, cracks and comebacks,
Big lies and old lines, swear words, tall tales and sweet talk,
I sure loved it, but it’s like it was only a day.

One thought on “Legendary Frontier Days Told for These Times: ‘Paul Bunyan’ by Larry Beckett”