Last night, I dreamed I saw Lloyd Geduldig. Dusk was falling. Alongside a grain silo just outside the town, his broad, pale face hovered low, like an early moon.

The silo stood near a T-junction, and just behind it, tread marks cut across a field. Clumps of mud were strewn about: a tractor had recently traveled the rut, tearing up the ground. Apart from that, all was thickly covered with snow.

Yes, the dream came complete with an old-fashioned winter, the kind we used to curse as we stamped our feet at the bus stop, the kind upstate New York has not seen these thirty years. And on the hillside, the bare trees were like pencil strokes. Just the way I remember.

I didn’t care if my moving arm disturbed people in the nearby seats. If the sibilant scratch of pen speeding across paper or the occasional crackle of pages turning in my spiral notebook distracted others from the action onstage, I didn’t care. I was busy pinning down my immediate, my strong reactions. I sensed obscurely that if I could capture those responses and also seize the reader with a powerful first sentence, good copy was within my grasp.

But as I took notes, writing at times with such vehemence that my pen dug into the page underneath and the page behind that, I sometimes wondered: who would take my writing seriously, if they knew who was behind the byline? I was a freshman at the local college, just seventeen years old. The years mount and mount; the question hovers.

The deadline for the morning paper fell at midnight. As the applause died away, I would rush from the theater and make for my dorm room, settle in at the keyboard, and roll in a blank sheet. At first, I wrote on a portable Olivetti, a gift from my mother when I went away to college.


But computers were about to become the big thing. Nobody had their own machine yet; a company called Apple donated several rooms full of them to the school, and then I would go to one of those rooms after the performance to write the review and print it out. Sometimes, especially when term papers came due, there was a long wait. You got the computer for forty-five minutes; if you needed more time, you had to log off and put your name on the list again. And there were always more people in line: some reading, some writing, some bedded down on the floor, their heads pillowed on knapsacks filled with textbooks.

While I waited, I would make some more scrawls in my notebook. When at last my name was called, I worked rapidly to weave my notes into something more substantial—substantial yet brief, for Lloyd had said to keep it to 750 words.

If I was lucky and got two free tickets for the performance, my boyfriend came, too. While I wrote the review afterward, he sat patiently, headphones clamped to his ears, listening to his tapes for Japanese class.

When I finished, we descended the long, cobblestone hill from the campus into the sleeping town. We crossed the pedestrian mall in the center with its darkened stores, then went one block farther, down State Street, past the movie palace and the tobacco-store Indian. The door of the newspaper office had a drop slot for nocturnal submissions, down low, near the ground.

The deadline met, we continued for a few blocks more, almost to the far edge of the town, to the all-night diner by the railroad tracks. I usually ordered chili, washed down with a strawberry milkshake; the boyfriend always had a burger with fries and a Coke. We split the check, then trudged back up to the dorms. We rarely spent the night together; we both had roommates.

I bolted awake early and ran out to buy the morning paper. I flipped through it, searching for my name, my words. I pulled out the extra copy of the typescript I’d kept from the night before and compared my draft with the published version, puzzling out the reasoning behind the edits.

A few days later, the mail would bring an envelope addressed in tiny, crabbed script. In the enclosed note on newspaper letterhead, the editor would comment on my work, signing off with his initials, LG. “Nice work, save a few infelicities of style,” said a typical missive, following up on a piece of mine about a postmodern dance troupe that had passed through on a one-night stopover from the great metropolis downstate. The infelicities were gone.

The note always came wrapped around a check for twenty-five dollars. There was no direct deposit then.

My first meeting with Lloyd is among the things I barely remember now. It probably followed a cold call, dorm room to newspaper office; I had a knack for cold calls back then, because when I was seventeen, eighteen, twenty, twenty-five, the essentials—jobs, housing—were in constant flux. I was always chasing after some necessary thing.

To whoever picked up the phone at The Journal, I must have said that on the strength of a few years of ballet lessons and some library books about dance I’d pored over until the pages wore thin beneath my gaze, I wanted to take over doing their dance reviews, and that person, having no idea what to tell me (on the phone, I sounded even younger than I was), must have passed me to Lloyd. I never found out what his job title was exactly, but he had authority. People got passed to Lloyd when nobody else knew what to do with them.

Here is the sum of what I recall about Lloyd. He was old then, when I knew him, at least forty-five. He wore suspenders and was rarely without a pipe. From time to time, he made a passing reference to his early life in Britain. His accent had been sanded down by long years in the United

States, it seemed to me. Why he came to America, and whether he brought a family with him, left one behind, started one here or some combination of the above—these things I never learned.

Mainly what I knew about Lloyd was that as an editor he took infinite pains with his own work and that of others, perhaps not even distinguishing clearly between the two. He had the penmanship of someone whose attention to the crucial, minute detail caused him untold anguish.

And he was definitely out of place in the bustle and rush of a newspaper office. Even at seventeen, I could tell that he was not meant to work in a newspaper office. He should have been up on the hill, at the college, teaching something. I had no idea why he was at the bottom of the hill instead of the top, only that the bottom was the wrong place.

You can read “Infelicities of Style” in its entirety in Issue No. 102, which you can buy here. 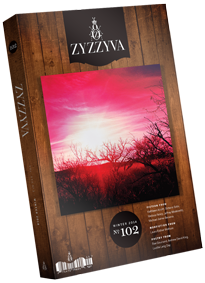 “‘Infelicities of Style’: 2015 Best American Essays Notable, Issue No. 102” by was published in ZYZZYVA No. 102. Purchase the back issue in our shop.