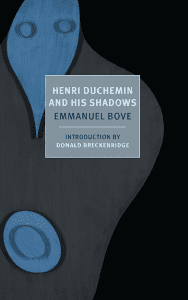 French author Emmanuel Bove wrote novels and short stories that combined the psychological insight of Fyodor Dostoevsky with Edgar Allan Poe’s penchant for the macabre. His fiction shed a light on young men dangling precariously above disaster, men whose neurotic impulses frequently led to their ruin. Born in 1898, Bove’s own life proved as strange and fortuitous as that of his downtrodden characters. The author spent many of his earliest years living in abject poverty until his father’s second marriage introduced him to a world of wealth and privilege. The outbreak of World War I once again dashed the family fortune but saw the beginnings of Bove’s writerly aspirations. Even as his personal life continued to see its ups and downs, Bove ultimately found acclaim in the literary world.

Bove’s success was due in part to the admiration of famous writers such as Colette (who helped Bove’s first novel secure publication) and Samuel Beckett. Beckett in particular praised Bove for his ability to include only the most “essential detail” in his sparse prose. Bove excelled at emphasizing a sense of the unreal, such as in the story “Night Crime,” where a poverty-stricken man contemplating suicide finds: “Soon it seemed to him that the floor was slipping away beneath his feet and that his legs were swinging in the void, like those of a child on a chair.”


While the non-commercial nature of his work failed to prevent Emmanuel Bove from enjoying a measure of fame during his lifetime, the chaos of World War II and his passing shortly thereafter threatened to resign his work to obscurity abroad. Fortunately, a series of English translations in recent decades have returned Bove’s name to the international scene. This summer, the New York Review of Books’ Classics series published Henri Duchemin and His Shadows (New York Review Books; 143 pages; translated by Alyson Waters), a slim and accessible volume collecting seven of Bove’s late-era stories. The book’s brevity and compilation status offer the ideal introduction to Bove’s world, a dark and paranoid place that should feel familiar to readers of Poe or Knut Hamsun’s novel of destitution and despair, Hunger.

Bove’s protagonists are invariably men, often in the middle of life, who find themselves dealing with sudden twists of fate or bouts of all-consuming anxiety. These are characters that suffer from a solipsistic preoccupation with their own happiness – or lack thereof. In the collection’s opening tale, “Night Crime,” Henri Duchemin is a forty year-old man who observes “the holes in his trouser pockets and the long hair tickling his ears were constant reminders of his poverty.” Henri spends a particularly miserable Christmas Eve haunted by a mysterious and unshakable stranger who assures Henri all his troubles will cease if only he robs and murders a local banker. Late in the anthology, “The Child’s Return” offers a variation on the Biblical story of the Prodigal Son, the pace slowed down dramatically to deliver the minute-by-minute psychological state of the main character, and does so on a level of detail that would make Dostoevsky proud.

Both “What I Saw” and “Is It a Lie?” follow characters tortured by their absolute certainty that their partners are cheating on them, despite all evidence to the contrary. At times, it is as though Bove temporarily drops the artifice of fiction to address the reader directly, as when the narrator of “What I Saw” declares: “I am suffering as much as a man can suffer. And I am not writing to entertain or interest you…” Perhaps the highpoint of the collection, “The Story of a Madman” is presented as the monologue of a World War I veteran who resolves to permanently sever all contact with his friends and relations. His harsh decision is perhaps due to boredom or a perverse desire to defy social conventions, though the character is clearly suffering from what we would now identify as Post-Traumatic Stress Disorder.

Emmanuel Bove excelled at writing characters whose mania practically spills off the page. He avoided the over-the-top murder and gruesome machinations of Poe, opting instead for altogether more commonplace scenes, making the drama of his stories relatable in its very domesticity. Nevertheless, Bove displayed a keen insight into the darkest impulses tucked away in the recesses of the human mind. His stories document consciousness wrestling with itself. Bove, much like the narrator in “What I Saw,” dared to ask: “Can one really portray suffering with words?”

Toward the end of “Night Visit,” two friends – one of whom is suffering from a suicidal depression – make their way home at night. The narrator remarks, “The moon had disappeared. And without it, as if they lacked a leader, the stars seemed in disarray.” Over the course of this collection, Bove seems to suggest that without the existence of God, without the solidarity of our fellow man, humankind is alone – and in a state of disarray. The richness of psychological detail and existential weight contained within these stories elevate them beyond the confines of the weird or the macabre, and explain the enduring appeal of Bove’s work. Readers seeking a fiction collection decidedly outside the mainstream would be wise to spend a few restless nights with Henri Duchemin and His Shadows.