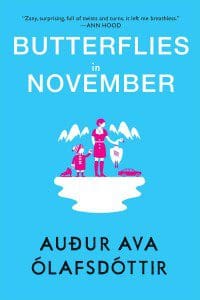 Set in the wintery depths of Iceland during the darkest days of the year, Auður Ava Ólafsdóttir’s novel Butterflies in November (Black Cat/Grove; 296 pages) opens with a surreal scene. After accidentally running over a goose, the unnamed narrator hauls the carcass into her car trunk with plans to surprise her husband with a lavish dinner. What follows is the story of a woman out of sync with domestic life, whose impulsive nature leads her on a journey to self-discovery. We get a sense early on of our narrator’s elusive nature during a confrontation between herself and her husband. With brimming frustration, he reels off an extensive list of marital complaints–she refuses to conform to a proper schedule, she doesn’t want children, she hardly ever cooks dinner–before matter-of-factly asking for a divorce. There is another woman, he tells her unashamedly, and she is pregnant with his child.

As its title suggests, Butterflies in November is full of paradoxes. At once playful and dark, the novel, smoothly translated by Brian FitzGibbon, unfurls with a series of strange occurrences and characters. The narrator is enchanting, though at times painfully aloof, an impetuous woman who, after being dumped in one day by two men (her husband and her lover), wins the lottery and embarks on a journey eastward along Iceland’s Ring Road. Adding to the circus-like atmosphere is her travel companion, her best friend’s four-year-old son, Tumi, whom she has promised to care for while the friend recovers from an accident in the hospital. The child is comically misshapen: squat with a big head and an obscenely large hearing aid, which “looks like a receiver for picking up messages from outer space.” They make a strange but dynamic pair and, slowly, learn to communicate and read one another. Their relationship is fascinating to observe: she is a translator by profession who knows eleven languages; he is a deaf child with a speech impediment. In fact, the child’s sporadic verbalizations often have to be interpreted and re-articulated by the narrator. The two develop their own unique rhythm, as they head into the desolate and harsh arctic landscape.


Ólafsdóttir achieves an impressive depth in her portrayal of Tumi, though he says little. He is passionate about animals and writes semiliterate poetic phrases with his finger on the misty car window—though the narrator swears her friend told her the boy doesn’t know yet how to read or write. Despite their age difference, Tumi’s emerging understanding of shame, desire, and identity parallels the narrator’s struggles with the same issues. Ólafsdóttir also deals openly with gender confusion during childhood and the pressures parents and adults assert on children to conform to set roles and identities. The narrator also ponders how to explain death to Tumi after his goldfish, foolishly kept in travel-sized jars in the trunk of the car, die. But the narrator’s own conception of death is fractured and murky at best. Though clearly the principal caretaker in the relationship, the narrator learns as much from her young companion as he does from her. She even begins to learn sign language in an attempt to bridge the gap.

Structurally, the novel imitates the Ring Road, which traces the oval-shaped perimeter of the country’s coastline. Themes, images, and characters reappear like landmarks on a circular track. Most prominent among the themes are motherhood, language, and death, as the narrator grapples with her failed marriage, childhood memories, and the looming question of what to do next with her life.

The ways in which memories serve as vehicles for elucidating the present in the story are striking, too. Placed intermittently within the text, and told with poetic lyricism and present tense verbs, the narrator’s flashbacks disentangle both her and the reader from the fixed trajectory of time and space—in the way that picking apart our memories only can. One favorite example is the narrator’s lapse into a memory that marks the beginning of her ongoing identity crisis. She is only two years old, spending the day at the lake with her brother and watching the ducks swim by in a line. She describes feeling that she is no different than the little ducklings, which are more or less the same size as her. In this early burst of consciousness, the narrator has not yet differentiated herself from her surroundings; she is no more a girl than a duckling, or a goose for that matter. Wishing to join her fellow ducklings, she bounds into the water and immediately sinks below the water’s surface: “It is only when I start to drown and to experience what dying is like for the first time, only when my cloth diaper and trousers have been engulfed by a mass of light green lake sediment, that I realize that I am not a duck, that I belong to another species.” Back in the present, the narrator still has not successfully integrated into her species. Her early epiphany instead delineates the start of her isolation. The continual appearance of dead or wounded animals in the text seems to mirror that loneliness; the narrator is constantly denied the ability to recognize herself in these creatures as she once did with the ducklings. Her journey through the barren landscape leaves a trail of death in its wake.

The setting of Butterflies in November is more than the backdrop to this adventure story. While other characters pop in and out of the two central characters’ lives, Iceland, with its black lava fields, austere glaciers, and dwindling daylight, remains a daunting yet comforting companion. As the narrator explains, “Who I am is intrinsically linked to where I am and whom I’m with. Right now all my efforts are centered on making the most out of the fading light, while my traveling companion sleeps in his balaclava, tilted against the window in the back. The only decision that needs to be made now is whether we stop or not and, if so, where.” The question remains why the narrator, inundated with lottery winnings (more money than she will ever need), chooses to travel domestically. We know from early on in the novel that she loves warm climates and collects books about southern, Mediterranean countries. So why not travel abroad? The reason can only be that, despite its appearances, this journey’s purpose is not to escape from her problems. Instead of turning loose and running free, the narrator turns her gaze inward. The old adage of ‘finding oneself’ abroad is here rejected. Rather, only by remaining in Iceland, traveling to the eastern side where she often visited her grandmother as a child, can she hope to gain some insight into herself.

The novel ends a bit peculiarly with a collection of recipes for the dishes mentioned throughout the story. While certainly eccentric, and perhaps too domestic for the average reader, this addendum is hardly surprising given the amusing twists within the novel. Some particularly humorous recipes include “Wild Goose with Trimmings and a Rich, Thick Wild Game Sauce” (including detailed instructions for disguising the tire marks on the road-kill bird), “Home Brewed Crowberry Schnapps in a Jar,” “Sesame Seed Bread Rolls From the Bakery” (this involves merely going to a bakery), “Hooch,” and “Undrinkable Coffee,” plus recipes of more conventional Icelandic cuisine.

And though translator Brian FitzGibbon leaves words specific to Icelandic culture in their original, an American reader will find the text easily comprehensible if slightly alien. If anything, this adds to the eccentricity of the world Ólafsdóttir has created. FitzGibbon succeeds in capturing the naturalness of her dialogue, which, though simple on the surface, is wrought with misunderstandings and underlying meaning, like the uniform layer of ice and sludge smoothing the fissures and ridges of Iceland’s landscape.