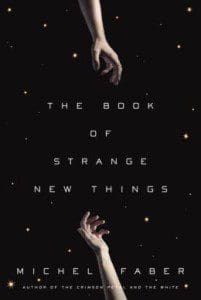 Michel Faber’s The Book of Strange New Things (Hogarth; 496 pages) explores first and foremost the separation of a husband and wife by light years of space. It is also a meditation on religion in an age of science, on devotion, and, to put it plainly, on life-work balance. Coming after his acclaimed novels The Crimson Petal and the White and Under the Skin, Faber’s new novel has been praised by the likes of Phillip Pullman, David Benioff, and David Mitchell. It is hailed as “genre-defying,” and though it plays into certain sci-fi tropes, it examines the human reaction to communion with interstellar beings in a complex and specific manner, a manner often reserved for more literary works. It shies away from the technical acuity of hard science fiction, existing in the space between a speculative and literary work.

Peter, a former drug-addict-turned-preacher, takes on a job for USIC as a missionary to aliens on the newly discovered world Oasis. “These days, the bigger the company, the less you can figure out what it does…You ask USIC what they specialize in and they tell you things like…Logistics. Human Resources. Large-scale project development.” Peter never even decodes the acronym.


He writes back to his wife, Beatrice, and as they experience increasingly disparate realities, they grow apart, scrambling to remain emotionally synchronized. These messages, which are delayed by the relativity of space-time and by Peter’s increasingly frequent trips to the alien colony to preach, serve formally as epistolary markers of the increasing danger and dread on the home front (grocery stores run out of large amounts of food, tidal waves destroy island nations) and of the widening disconnect between husband and wife.

The pacing of the novel allows for us to witness the gradual shift in Peter’s reaction to his wife’s letters. Initially, the words “Dear Peter,” throw him into ecstasy. “Oh, the preciousness to him of those words! If there’d been no more to her message than this, he would have been satisfied. He would have read Dear Peter, Dear Peter, Dear Peter over and over, not out of vanity, but because these were words from her to him.” When Peter ventures into the alien colony for a few days at a time, he returns to the USIC base where weeks of messages from Beatrice await him.

Faber does a bit of world-building in The Book of Strange New Things, though it is spare. The planet’s rain moves in undulating spirals, the humid atmosphere slipping through the clothes of USIC personnel, enveloping their bodies in an anthropomorphic caress. Thus, even the wind serves as an ironic reminder of the light years barring physical intimacy in Peter and Beatrice’s relationship. The USIC Centrifuge and Power Facility, a facility that collects freshwater, is colloquially called the “Big Brassiere” for its shape. It is renamed “the Mother” after the death of one of the key engineers on the project. Even the native Oasans’ faces are described by the protagonist as looking like “a placenta with two-foetuses—maybe three-month-old twins, hairless and blind—nestled head to head, knee to knee.” Each of these details are eked out so incrementally they almost go unnoticed—but throughout, they echo or react with Peter and Beatrice’s ongoing situation in interesting ways.

The pacing of the exposition will be somewhat problematic for regular readers of speculative fiction, as the world-building—the wonder of discovering a new world and species page by page alongside the protagonist—is lost on familiar qualities of sci-fi and on a generally drab environment. The planet seems to contain only a few plant and insect species, and is made up of plains of mudflats stretching as far as the eye can see. The conflict barely registers until about midway through the book—the disappearance of a linguist, and the previous priest to the Oasans, who have simply “gone native.” At first, Beatrice’s worldly issues are much more interesting than what’s unfolding on Oasis—though a Coca Cola may cost fifty dollars on the USIC base, empty grocery store shelves back on Earth eclipses that. Ultimately this disparity between the troubles on Earth and Oasis serves to reinforce the disconnect between Peter and Beatrice. For example, Peter cannot bring himself to care about the Maldives, which he learns has been completely destroyed by a freak tidal wave, a result of climate change. Because he has just made contact with the Oasans and is elated to find that they already know of Jesus, his mood is completely at odds with his wife’s: “…he felt he should make some reference to the Maldives [in his return letter]. And then felt guilty for feeling he should, rather than wanting to.”

Meanwhile, Beatrice combats what she thinks may be her selfishness in experiencing tragedy on Earth: “I wish I could send you the images, even though I also wish I could erase them from my mind. Is it the lowest form of selfishness to want to share the burden like this?” Faber asks complex questions of the reader: how much human experience and thought can never be shared between two people? Is love simply generated by the self, never received? These considerations are particularly suited to the book’s discussions of faith as well: Is God’s love generated from within? Faith and love are then intertwined.

A vertiginous sense of weightlessness is generated as Peter and Beatrice navigate what really binds them, when nothing of them exists to the other but small digital text on a screen. “I want to talk specifics with you … ,” Beatrice says at one point, “I feel like I’m your sister or something, sending you a long screed of complaint, chattering about things that you can’t possibly care about.” And during a funeral for a USIC member on Oasis, Peter says in his eulogy, “Each of you will have your last memory of Art Severin, the last thing you said to him, the final thing he said to you…we’re struggling to make sense of his unreachability…” Human connection is explored thus in The Book of Strange New Things—in death, life, and everywhere in between.

Faber melds living bereavement with death, faith with love. In a letter from Beatrice to Peter, she writes, “Someone at work said to me this morning, ‘Where is God in all this?’…The real question for the bystanders of tragedy is ‘Where are WE in all this?’” The Book of Strange New Things casts mankind out into space, into a vacuum of emotional history where Faber can explore these ideas from the ground up.