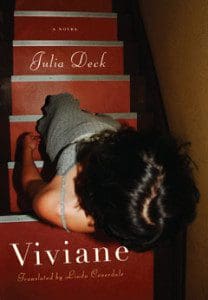 The slim spine of Julia Deck’s first novel, Viviane (The New Press, 149 pages), expertly translated from the French by Linda Coverdale, belies its intellectual heft. Deck’s crystalline language, too, appears innocently transparent, offering up on a silver platter events just as they transpire and thoughts just as they emerge from the narrator’s troubled mind. But this, too, is delightfully deceptive, as the hidden influences of language, and the impossibility of knowing or telling exactly what happens, appear to be part of Deck’s central concern.

On the first page, Deck flatly introduces us to Viviane Élisabeth Hermant’s excruciatingly uncertain perspective: “You are not entirely sure, but it seems to you that four or five hours ago, you did something that you shouldn’t have.” Her predicament is stark. At forty-two, Viviane is a new mother and newly single: her husband, Julian, has left her for another woman, declaring one day, “I’m leaving, it’s the only solution, anyway you know that I’m cheating on you and that it isn’t even from love but from despair.” Utterly alone, Viviane now believes, though she cannot be sure, that she may have killed her therapist. As Viviane tries to determine what she may have done, she is both detective and, perhaps, culprit in this psychological thriller. She delves into the “hole [her] memory has become,” trying to remember what she did. But she conducts her investigation in the external world, too: following and even interviewing witnesses in a series of increasingly bizarre and chilling encounters. It is a captivating and puzzling story, and it is refreshing to see a new work of literature explore the ways narrative can both bend perception and reflect a psychologically troubled mind without allowing the narrative itself to lose all sense. This is a literary thriller with aspirations, one with a well-developed understanding of the literary and theoretical traditions of modernism and post-modernism.


Postmodernism may be, for all the years of discussion, still ill-defined, a shape-shifting idea useful mostly to academics. Even its temporal definition is not entirely clear, as many would agree that postmodernism does not simply pick up where high modernism left off (let’s say, somewhere around Beckett), but rather that modernism and postmodernism continue to coexist in contemporary literature. Even so, the general consensus is that somewhere around the 1940s another literature developed, distinguished by a few key characteristics. Among these: a concern with fragmentation, a relentless ambiguity, and an unreliable narrator—a trope now so familiar it risks becoming cliché. Deck’s novella seems deliberately to evoke each of these postmodern narrative characteristics and test their boundaries.

Take the unreliable narrator trope, for instance. Deck’s treatment is experimental and effective. Chapters are told, varyingly, from the first, second and third person, though the voice always stays quite close to Viviane. There is even a moment when the narrative voice addresses Viviane directly, using the French familiar pronoun tu. This unusual movement effectively replicates the fragmented and confused state of our main character’s troubled mind. She seems to suffer from multiple personality disorder and depression, persisting in seeking answers alternately through moods of frenzied energy and of foggy uncertainty and sadness. To know oneself and feel certain of basic realities of the world we live in is to weave a perpetually evolving story—a story in which the material of the past creates meaning in the present; a cogent, coherent narrative of identity and personal history. When we lose the thread of that complex narrative, our grasp on reality itself is threatened—this seems to be Deck’s suggestion, and it resonates.

Deck is able to move seamlessly between multiple points of view (perhaps in part because, though they are multiple, they are also all Viviane), creating a kaleidescopic view on this character’s mind. So close are we to Viviane throughout all three types of narration that we are drawn into a kind of claustrophobic anxiety, wondering what will happen to her, and to the infant daughter for whom she is responsible. What did she do, and why? For much of the book, we cannot know any more than Viviane herself knows. We as readers seek answers as she does.

In this, too, Deck’s narrative is deftly, delicately layered. Viviane is on a quest—a physical and metaphysical quest for truth, and for meaning in those truths. She has been engaged in psychoanalysis for, it seems, quite some time, and therefore engaged in a search for truths through narration. It is clear the dissolution of her marriage and her husband’s utter ambivalence toward her has left her emotionally adrift; not only has her marriage ended just as she has taken on responsibility for a new human life, but she is navigating this new reality without a partner in any sense. Her restless traversing of Paris is also its own kind of search for truth, this one in a physical and metaphysical postmodern, urban landscape. Searching for clues, she investigates other players in the case, crossing and re-crossing the city, on foot and via Metro. As Viviane wanders feverishly through this wintery setting, clearly unwell, a kind of chill descends on the narrative. No one seems to notice her distress. In fact, she is so little interfered with that the narrative remains nearly entirely within her own mind. Most everywhere she goes in this condensed, restrained picaresque, Viviane is confronted with cold appraisal, indifference, and sometimes scorn. Deck’s Viviane is the victim of a mercilessly ageist and misogynist culture, supplanted both at work and at home by younger women who are chosen to replace her by male authorities. Early on, the second-person narrator reflects on Viviane’s skills and shortcomings: “You are well educated, have a fine professional career. Such activities leave little room for becoming the perfect housewife. Which you regret, for in your bleakest hours, you’ll listen to the first person who comes along, and there are still people who claim that perfect housewifery is the way to hold onto a husband.” There are indeed. This physical and cultural terrain seems just as disinterested in Viviane’s plight as do the major players in her life.

In all, Viviane is a convincing and compassionate portrayal of a psychotic break from within the mind of the person suffering from the break. It is bold to frame a fundamentally postmodern text within a narrative cloaked as suspense or mystery or crime thriller. Deck raises the expectations of the genre and draws on the propulsive plot of an unfolding mystery, while withholding some of the answers and satisfactions readers crave of the genre—but then, readers of serious literary fiction will leave room for such turns, understanding that one of the pleasures of literary fiction is that it raises expectations of genre in order to subvert them.

There are, it is true, a few tormenting, unresolved questions. One moment which initially puzzled me (perhaps other readers can suggest answers?) seemed on further reflection to open yet still more doors of meaning. Near the end, the inspector apparently asks Viviane if she has a chronometer: “No, you do not have a chronometer,” replies the narrative voice, evidently very wearied by the endless interviews and questions. I wondered about the significance of this exchange.

A chronometer, of course, is an instrument for precise measurement of time, one that makes it possible to navigate accurately. Viviane has clearly lost her way, so that resolves one layer of meaning. Could it also echo Samuel Beckett, whose groundbreaking novel, The Unnamable, is quoted at the beginning of Deck’s book, and whose work seems, in general, to exert an influence on Deck? Time, timekeeping, and the oppressively rigid strictures of time—these ideas all simmer in Beckett’s works. In “Waiting for Godot,” Pozzo “seeks to know where he is, what the time is, and what happened, exactly” as Andrew K. Kennedy writes. In Beckett’s short theatrical piece titled “Catastrophe,” written for Vaclav Havel, one character repeatedly consults his chronometer, and, at one point exclaims: “For God’s sake! This craze for explication! Every i dotted to death!” James Knowlson, Beckett’s biographer, recalled Beckett’s “furious response when a critic described the ending [of “Catastrophe”] as ambiguous. ‘I can still remember sitting with him outside a cafe in Paris,’ [Knowlson] says. The playwright pounded the table and told him: ‘It’s not ambiguous—he’s saying, ‘You bastards, you haven’t finished me yet!’ ” Knowlson thinks this reaction, and the play he dedicated to Havel, epitomize Beckett’s mindset: “Beckett is about going on, persisting; however much you reduce somebody to an object, a victim, there is this resilience and persistence of the human spirit.”

Such resilience amid an unforgiving environment is at the heart of Deck’s novel, too. And I wonder if Deck would feel similarly distressed by possible grumblings about ambiguity in the final pages of her novel. Our thirst for complete comprehension—of life, of love, of betrayal, of the strange corridors of our minds—is rarely more than momentarily satisfied. Reflecting on the unexplained disappearance of Viviane’s father from her childhood, Deck writes, “Explanations were doubtless demanded, around the age of twelve or fourteen, when one hopes through skillful inquiry to obtain justice and amends. It quickly becomes clear, however, that an absence of cause is better than a slew of unsatisfactory motives, and silence reclaims its due.” In the end, this much is certain: Deck’s portrait of Viviane is refreshingly, rigorously humane. She is rendered as a complex human being, a woman coping with an opposing world. She has little support, no evident network of family and friends. If she seems absurdly, almost inexplicably isolated, consider this: many of the people we interact with daily in city life, in our increasingly flat and superficially inter-connected world, may be more fundamentally isolated than we might care to perceive. Many operate, as Viviane does, without an emotional or financial safety net.

Most fascinating and heart-wrenching of all, Viviane is trapped within a mind that, though sharp and energetic, mercilessly betrays and misleads her. And though she is much beat down by the events of this strange chapter of her life, she persists. She survives. She goes on, as best she can. Drawn by Deck’s thoughtful hand, Viviane is never reduced to a caricature or filed neatly in one category or another: she is not defined by her role as a mother, nor by her mental illness, nor by her career. Deck refuses to allow readers the easy comfort of pinning down Viviane—and thus the shifting narrative and points of view become more than an exercise in literary play. Rather, they form a study in compassion, and a rare act of empathic work: an attempt to dwell inside the confusion of a mind battling itself.