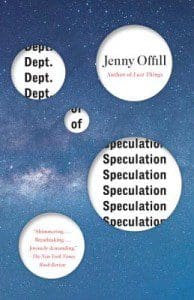 In Jenny Offill’s most recent novel, Dept. of Speculation (now out in paperback), a writer’s marital life and motherhood are traced through a series of short, brilliant segments, creating a narrative collage of moments marked by references to outer space, scientific facts, or Buddhist teachings. The unnamed narrator’s Brooklyn life consists of bed bugs and trips to Rite Aid, philosopher and almost-astronaut friends, and preschool supplies. In this domestic setting, we piece together the book’s fragments of prose to emotionally engage with the protagonist as she navigates her personal chaos, all while she wishes to find the time and solace to engage more fully with her art.

One of Offill’s talents is in creating a feeling of wholeness in the narrative—creating a suggestion of what is there—by not giving an explicit telling of the story. Each of Offill’s short sections is so precise in its language it’s as if she’s using a scalpel to extricate the right narrative moment, the right external reference to give life to the plot and characters. Though shaped like a puzzle, the novel engages with the reader: when you’ve all but forgotten something, Offill provides moments that unify and shape the narrative for you. And as the gifted but conflicted narrator tries desperately to piece together the beautiful and difficult moments of her life, the book suggests that these spaces between what is ugly and what is incandescent are where the art of human experience is to be found. We spoke with Jenny Offill about Dept. of Speculation via email.

ZYZZYVA: The form of this novel seems experimental in the way you move the plot forward through employing a sort of collage of scenes, philosophical ideas, and scientific findings. How experimental was this form for you as a writer, and why did you feel this form suited the story you wanted to write?

Jenny Offill: I have always liked compressed and fragmentary forms. I trace it back to my mind being blown by John Berryman when I was nineteen. But it took me awhile to figure out how to fit the pieces of the novel together. My first novel, Last Things, is much more linear, but there is a similar sense of cross-disciplinary play at work in it. Science, philosophy, and religious studies tend to be where my non-fiction interests lie.

Z: Much of the success in the reading experience of this story is in the unconscious activity that happens when making associative connections between disjointed paragraphs and sections. How concerned with traditional plot are you in your beliefs about writing?


JO: I don’t care about plot at all. I never have. This novel and the last one both had a marker at the halfway point for a long time that read goofily: SOMETHING INCREDIBLY INTERESTING HAPPENS HERE!

What that thing is (and how big or small it might seem) are plot points I figure out toward the end of a book. But the gaps between the sections were intended from the beginning. As a writer, I like to make narrative leaps, and I wanted to make a novel that was open-ended enough so that the reader could have his or her own chain of associations while reading it.

Z: What led you to incorporate philosophy and science into your story about domestic life?

JO: I guess it was a bit of a “fuck you” to the way novels about domestic life are usually treated. (As if the whole world isn’t sometimes apparent from your kitchen window.) I have always liked what I call “walking around” novels (Hunger, The Book of Disquiet, Confessions of Zeno, etc.) but they rarely have female protagonists. This has always frustrated me. I wanted to write a philosophical novel that was set in that often-trivialized realm.

But for a long time, I was nervous to try it because the stories of marriages coming apart or of the trials of parenthood are such shopworn ones. Using philosophical traditions and the findings of evolutionary biologists to “speculate” on these things felt like a new way in for me.

Also as a side note, there was a really interesting set of articles in Psychology Weekly awhile back where a science writer had a typical mid-life crisis with her husband and left him for new partner; later though she studied the science behind infidelity and freaked out and asked him back. That made a big impression on me mainly because she had such an oddly evangelical tone by the end: Listen to me, people! None of this is what you think! If I remember correctly, the tagline on the magazine’s cover was “Everyone Married the Wrong Person.”

Z: What was your writing process for this book? Did it grow out of something else, or did it come to you more or less fully formed, conceptually?

JO: I had written a more conventional novel that told the story of a marriage from the point of view of a woman who had planned to be an art monster but instead had an affair with her married professor and left it all behind for him. It was meant to be the sort of love that had to blow a tunnel through solid rock in order to see the light of day. Yet there was something wrong with it I couldn’t fix. It lacked wit and surprise. Eventually, a friend suggested I take it apart completely and just save a hundred little things from it. And so after a few sleepless nights, I did that. I wrote out these fragments on index cards and started over again.

Z: The story shifts its point of view from first person and second, using the “you” to address the husband, to third person throughout most of the novel, and then back to first at the end. It also refers to the characters not by name but by titles such as “the wife” and “the baby.” What questions are raised in this shifting in the protagonist’s dislocation of perspectives?

JO: The shifts of POV in the novel are meant to mirror how close or distant the narrator feels from her husband at any given time. So in the beginning when they first meet, she speaks directly to him as “you.” Later, after they marry and fall into familiar and prescribed roles, she refers to him “my husband.” And then as things begin to fall apart, the POV spins out into space and the narrator speaks of everything as if from a great height. It is only at this point that, she calls him “the husband” and herself “the wife.” And then, slowly, the POV changes and moves closer again.

The shift to the third person POV right in the middle of the novel felt like the key to whole book for me because it allowed the reader to see how she has begun to disassociate, to float above her own life like a ghost.

Z: You are a writer, a teacher, and a mother, as is the protagonist. How did your own experiences influence the creation of this story that is so focused on family life and the struggle to make art?

JO: I’ve always been interested with writers that play with personas in their work.  Literary doppelgangers, etc, etc. You find things like that in Paul Auster’s work and in Ben Lerner’s and in Julie Hecht’s as well. I wanted to use bits from my own experience to give the novel the texture of a lived-in life. Also to have something to counterbalance the more dramatic aspects of the story. It interests me that no one ever wonders if I’m the girl or the husband or the philosopher or the sister though there are parts of my life in all of them. Next time I’ll have to mix it up and have my narrator be an elderly botanist or something.

Z: There are many references to outer space and astronomy in the novel. In the inception of this novel, what questions or sentiments about space did you have that related to the novel’s title, Dept. of Speculation?

JO: I had been reading interviews with astronauts before I started the book and one of the things that struck me about their observations was how sublime and harrowing the experience of being in space was. What came through was how far from home they felt even as they were doing this longed for, culturally exalted thing. Somehow it reminded me of how it felt to be a parent in those early days, that sense of having spun out of the world as you had known it, of being utterly ungrounded.

I already had written a lot of the novel and had the Edison quote about outer space in the beginning so I wanted to find a way to add some more space images to the narrative. None of it made sense at first, and I almost scrapped the idea, but for some reason I kept at it until it started to come together. In general, I tend to trust these kind of unlikely associations when I have them. They feel like meaningful correspondences that exist below my conscious level of perception.

One thought on “The Philosophical Novel Couched in a Tale of Marriage: Q&A with Jenny Offill”