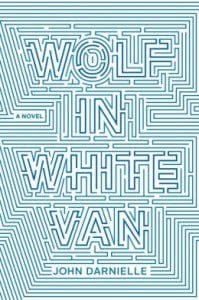 Wolf in White Van (224 pages; Farrar, Straus & Giroux) marks a tremendous literary achievement by the artistically and lyrically inclined John Darnielle, guitarist and lead singer of the Mountain Goats. Darnielle is already praised for the writing in his songs, so his fans may not be surprised to see him succeed in his more literary pursuits. But the novel—given its complexity of craft, its deftness, and movement of prose—is not something to be taken for granted by anyone.

In Wolf in White Van, we follow the life of Sean Phillips, who lives an isolated life due to an injury that disfigured his face, and we witness his day-to-day experiences and thoughts that often morph into psychological digressions and memories. Over the course of this non-linear novel, we move backward in time as we progress deeper into the complexities of his ailments, his strained relationships, always moving into his younger self, until everything unfurls around the climax on the novel’s final page.


Sean spends his time creating Trace Italian, a choose-your-adventure-style game played through the mail, where players must navigate a post-apocalyptic world. The game, in the basic sense, is about survival, but it’s also about destruction, deception, and seclusion. His game’s world parallels his own battle for survival and sovereignty, and Sean’s devoted involvement with it brings to question both the beauty and the dangers of such engagements with fantasy—it is because of this this game Sean finds a much-needed escape yet faces serious criminal allegations and moral trials, too.

Just as troubling are Sean’s relationships with his parents and friends—both from his childhood and through his limited interactions with his gamers via mail—and the honest depiction of their resentment or indirect influence over him for his self-destructive behavior. Besides the emotionally poignant human relationships explored in this story, what’s most striking about the novel is its sweeping, often spellbinding associational structure, its movement from scene to scene, its navigation through time and space. Wolf in White Van moves seamlessly through the realms of Trace Italian, Sean’s memories, his imagination, and objective reality, giving us Sean’s worlds in all their complexity while showing how blurred the borders are among them.

Some might describe Sean as a sci-fi enthusiast, a loner, a freak, but Darnielle invokes an earnestness in Sean’s narrative voice that it stretches his character beyond those one-dimensional descriptions. There’s something you love about Sean, something tender about his obsessions and fantasies, but something dark and frightening, too—aspects revealed in brief detours into his streams of consciousness. In these detours, Sean’s imagination runs loose and the novel glimmers and sparks, making you feel like you’re indulging in the secret pleasure of going down a hidden path, breaking some kind of rule, eavesdropping on a conversation.

Reading Darnielle’s novel is like moving through a maze, where, much like the Trace game, each turn takes you to the next unexpected pathway. Darnielle has pasted vivid signs on the walls along the way, often leaving the reader wondering what she is doing there. But the indications planted earlier always crop up again somewhere else later, revealing more layers to the story, building up to the wallop of the final scene.